The mini crime conference had backfired. For whatever reason, his fault or not, Marzette couldn’t sell his vision. And wasn’t just Steel who was balking. Almost immediately after the soon-to-be notorious meeting of narco superpowers, word began to filter out that a number of other attendees of the kingpin summit, although not nearly as vocal as Steel, were also unhappy with what was presented to them. What was pitched as a cooperative alliance to increase profits for everyone was perceived, at least in part, as a greed-driven power grab. A man of keen instinct, Blaze Marzette knew full well that his actions had just incited a war.

Teaming with a group known as the “East Side 12”, its alleged in police reports that Steel and his new allies approached members of the Detroit mafia, specifically  internationally-connected drug barons, “Papa John” Priziola, “Bozzi” Vitale and Jimmy “The Goon” Quasarano and informed them of what was going on and requested backing in the simmering street battle. Several leaders of the East Side 12 were in attendance at the 20 Grand meeting and when they joined forces with Steel they introduced him to their contacts in the mob. Impressed by the brash and brazen Steel and realistically having no other choice without risking losing their stranglehold in the city’s wholesale drug market, the Italians are alleged to have signed off on their war against Marzette.

Unfortunately for Nual Steel, his participation in this blood feud would be short lived. On August 27, 1970, a mere seven weeks after that fateful get-together at the 20 Grand, Moody and two of his henchmen, gunned Steel and his bodyguard down as they sat having a drink at LaPlayer’s Lounge on Joy Road. One of the bar’s patrons that night, a man named Charles Perkins, identified Moody to police as the man who killed Steel and Moody was soon arrested and charged with the crime. Released on $25,000 bond pending trial, Moody made sure the case would never see the courtroom and within weeks Perkins disappeared. 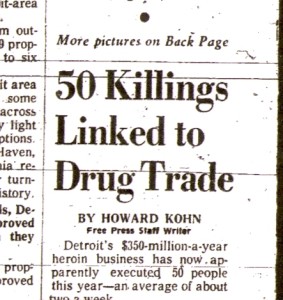 The first salvo in a corpse-ridden conflict had been fired and the violence between the two factions would not seize for another two years. Roaring back on behalf of Steel, the East Side 12 started killing off Marzette’s men and setting ablaze his various drug houses. In retaliation, Moody killed a pair of East Side 12 lieutenants as well as a former Marzette enforcer named Robert “Bobby the Bopper” Martin, who had shifted his loyalty to the Eastsiders and Joe Graves, a fellow kingfish and participant in the 20 Grand conference, who Marzette felt was too quiet in support of the Westsiders’ cause.

As 1971 began, things got worse and blood was flowing rampant on both sides of the heated gangland dispute. Newspaper accounts of the day put the body count at two gangland-related deaths per week. Police reports indicate that Moody is reputed to have personally executed 15 people between Christmas of 1970 and July of 1971 on behalf of the Marzette organization, including helping orchestrate and carry out the infamous Flag Day Massacre, a bloodletting of eight of Marzette’s enemies on June 14, 1971.