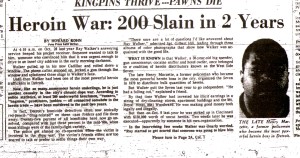 Despite the casualties that both groups were taking, neither side was backing down and the death toll continued to rise. In what would end up being the most violent and carnage-strewn street war in the city’s rich criminal history, close to 75 murders were attributed to the combat engaged in by Marzette’s west side contingent and the East Side 12 for over a year and a half.

“Things were pretty unstable there for a while,” said Robert De Fauw, agent in charge of the DEA in Detroit in the 1970s and 80s. “There was a patch there where bodies were dropping at a pretty hefty rate. It was all over who was going to control the heroin in the city. The Italians had always had the power dating back to Prohibition. In the 70s, guys like Marzette wanted to break off and find their own supply connections. They felt stifled. When you mix that with ambition, which Marzette and those people had, it can be combustible and it was.”

Implored by the Mayor’s office and his former associates in the police force and to call off the war, if only to quell increasing public fears stoked by the incessant media coverage of the endless brutality, Mazette did his best, but it proved futile. At the behest of the East Side 12 as a means of ending the dispute, he ordered the murder of his trusted confidant and most-utilized executioner Jimmy “The Killer” Moody, found dead in the trunk of his Cadillac El Dorado at Metropolitan Airport in Romulus in September of 1971. Betraying his trust, the Eastsiders extended their assault on the Marzette organization, killing six more Marzette lieutenants in the next three months.

Only the death of Marzette via kidney failure in the spring of 1972 could stem the tide of bloodlust and end the war, leaving his former lieutenants and the mafia behind to put the shattered pieces of gangland harmony in the region back together.

And those pieces would once again lead to riches in the Detroit drug trade as the decade progressed and the narcotics boom in the country and the area only grew larger.