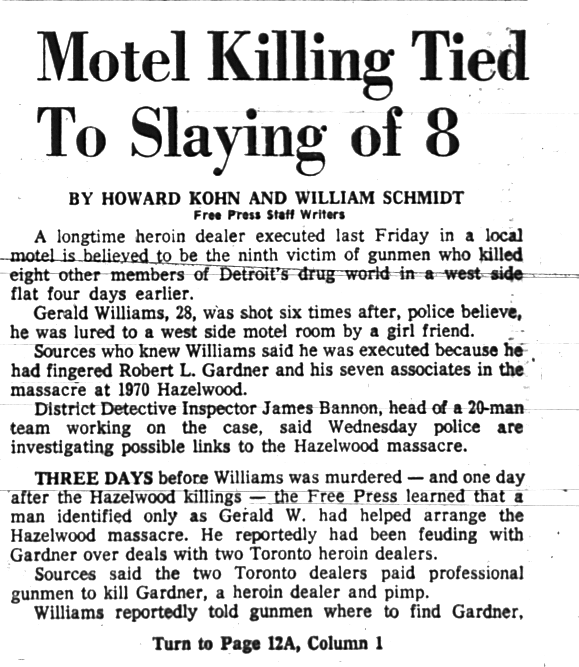 It was an ambitious idea just as much as it was a dangerous one. Henry “Blaze” Marzette wanted to completely shut the Italians out of the inter-city drug industry and create a city-wide conglomerate of African American crime bosses which he would oversee. The endeavor was the definition of high-risk, high-reward. Never one to shy away from a gamble, Marzette, the Motor City’s first true urban Godfather, seized upon the idea and tried to make it a reality. 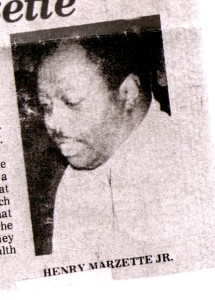 Around mid-1970, he invited nearly 30 of the city’s most respected wholesale dealers to a meeting at the Twenty Grand Motel on Warren in order to pitch them on the idea. The Twenty Grand was owned by a longtime local underworld figure and friend of Marzette’s named Edward “Fast Eddie” Wingate. Making an early fortune in the numbers business, Wingate owned a moderately-successful R&B music label and partnered with several Italian mobsters over the years in a variety of gambling ventures. He died Las Vegas in 2006.

Greeting everyone personally as they walked through the door to the suite he had reserved for the gathering, he tried his best to play the role of politician, not ruthless drug lord. As the meeting commenced, Blaze Marzette stood in the front of the room, ready to hold court. His inner-circle of Eddie, Gentlemen John Claxton, Arnold “Pretty Ricky” Wright, his third in command, and James “Jimmy the Killer” Moody, his personal bodyguard, enforcer and assassin, sat in folding chairs to each of his sides. Men with nicknames like “Cincinnati Black”, “Mr. Clean”, “Texas Slim” and “Big Son”, among a just as colorfully-nicknamed brigade of others, were seated in several plush couches adorning the brightly-decorated suite.

Getting straight to the point, Marzette asked those in attendance to come under his umbrella and turn their backs on their Italian supply connections. He offered a very enticing bottom line price for their product, as a result of recent deals he had struck in Malaysia as well as protection if the mafia chose to protest and declare war. In closing, he noted that the Italians were making all the big bucks on their collective drug transactions and that they themselves had the leverage to change that. Since they were the ones putting in most of the work, he reasoned to them, they were the ones who deserved to be getting the lions’ share of the spoils.

When Marzette was finished, the room went silent for a brief couple of moments. While most of the men he invited appeared ready to acquiesce, if only out of pure fear, one man made it more than obvious that he would not. That man’s name was Nual Steel, a ruthless independent drug lord that was known on the local streets for his reckless behavior and indignant attitude.

Steele stood up and charged to the front of the room, trying to attack Marzette. Met by Moody before he could lay a hand on him, the pair scuffled for a second or two before Steele composed himself and readied to leave.

In one last gesture of disdain, he spit in the direction of Moody and Marzette, declaring “I ain’t taking orders from nobody, especially no old man like you!” Never one to enter or exit a room without letting everyone know about it, he stomped out the door of the motel suite in a huff, muttering threats and insults until well out of earshot.