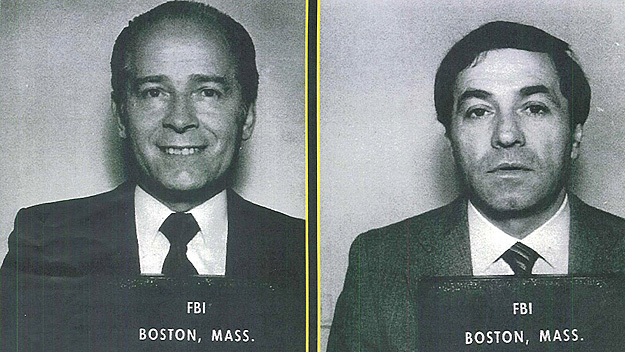 August 16, 2021 – Famed Boston underworld figure Stevie (The Rifleman) Flemmi will see the parole board this week down in Florida, hoping for relief from a life sentence for taking part in multiple gangland murders. The 87-year old Flemmi was partners with notorious Boston Irish mob boss James (Whitey) Bulger from the 1970s until the mid-1990s and has been in prison going on three decades. He is seeking a compassionate release from the board on Wednesday.

Flemmi has cooperated with the federal government in building murder cases against disgraced FBI agent John Connolly and New England mafia don Francis (Cadillac Frank) Salemme. Flemmi was a star witness at both Connolly’s 2008 trial and Salemme’s 2018 trial, resulting in a pair of convictions for Uncle Sam.

Together, Flemmi and Bulger took control of Boston’s Winter Hill Gang, a mostly Irish crime syndicate operating out of South Boston and Sommerville in the mid-1970s. They were indicted on a myriad of racketeering offenses in January 1995.

Bulger was on the run for 16 years, finally caught living in Santa Monica, California. Connolly grew up in “Southie” idolizing Bulger and his Irish mob cronies and when he became an FBI agent he teamed with him and Flemmi, exchanging intelligence, some of which was used to set up informants to be murdered.

Flemmi got the nickname “Rifleman” because he was a sniper for the U.S. Army in the Korean War, earning Bronze and Silver Stars for his valor in combat. The Rifleman was honorably discharged from military service in 1955 and returned to his hometown of Roxbury to begin life as

Because of his Italian heritage, Flemmi was a go-between for the Irish and Italian mob factions in New England. As a young gangster in the 1960s, Flemmi was partnered with future Italian Godfather Cadillac Frank Salemme in a series of executions and extortions.

In October 2003, Flemmi pleaded guilty to ten first degree homicide counts in a cooperation deal he cut with the U.S. Attorneys Office in Boston. The deal compelled him to testify in prosecutions of John Connolly, the FBI agent Flemmi and Bulger had corrupted, and his former pal Cadillac Frank, who was yanked out of the Witness Protection Program in 2016 and brought to trial for the 1993 slaying of Boston nightclub owner Stevie Disarro.

Flemmi accidentally walked in on DiSarro being killed by Salemme and his son at their Sharon, Massachusetts home. Flemmi himself murdered two of his young girlfriends, one of which was his step-daughter, in addition to the mob figures he helped bump off.

Bulger is one of the most infamous American crime lords in recent memory. His longtime cooperation with the government and confidential informant status throughout his reign of terror in South Boston was revealed by The Boston Globe and sent shockwaves through the underworld and FBI.

Flemmi was also a CI during his time on the streets and like Bulger believed to have a body count numbering well into the dozens. Bulger was beaten to death behind behind bars by fellow inmates in a West Virginia federal penitentiary three years ago. The 2015 film Black Mass was based on Bulger and Flemmi’s exploits, starring Johnny Depp and Rory Cochrane as Bulger and Flemmi, respectievly.