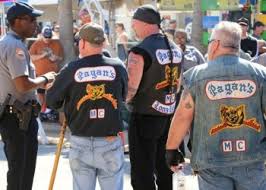 The raid was part of a local narcotics investigation that was eventually rolled into a June 2021 federal racketeering indictment against 11 Pagan’s leaders in the Garden State. Hooban is free on bond and will be sentenced on April 19, 2022. He faces up to 20 years in prison because he is a repeat offender, but will most likely only get somewhere between 3 to 5 years per the prosecutor’s recommendation.

According to federal court documents, Hooban is the Sergeant at Arms of the Pagan’s Jersey City, New Jersey chapter. Also nailed in the case was former Pagan’s MC national boss Keith (Conan the Barbarian) Richter and Newark chapter co-bosses Luis (Lou Rock) Arocho and Mauricio (M-Dawg) Guzman. Three years ago, Arocho and Guzman were involved in an axe handle beating of a Hells Angels affiliate down the street from the Hells Angels Newark clubhous

Richter, who pleaded guilty back in the summer to a gun-possession count, has already reported to prison to begin serving his 30-month term. Before he left for behind bars, Richter relinquished the reins of the club to Virginia Pagan’s figure Robert (Big Bob) Francis, according to multiple media reports.

The Pagan’s are in the midst of a high-profile bi-coastal expansion effort known throughout the country’s biker circles as the “Blue Wave” and a brainchild of Richter’s. All of the club’s chapters on the east coast of the United States have stopped wearing vest “rockers” with the respective city or state they represent displayed on them in favor of a “East Coast” rocker worn by everybody in the region.

New Jersey has been Ground Zero for much of the club’s east coast brand growth by force campaign. Federal authorities in New Jersey have indicted or gained guilty pleas from more than 10 different Pagan’s in the past 10 months. Although based out of the club’s Long Island, New York chapter, Richter was caught with a gun last February while riding in the front passenger’s seat of his SUV by New Jersey police after leaving a Pagan’s annual get-together in Lancaster, Pennsylvania, right outside of Philadelphia.