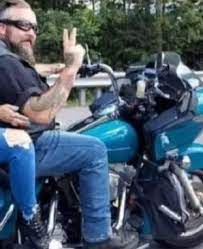 December 14, 2021 — The Mahoning Valley biker world is in mourning in the weeks following the death of Roy (Shakespeare) Mason. The hunt for his killer could be coming to an end very soon.

The 52-year old Mason, a proud member of the Outlaws Motorcycle Club’s Warren, Ohio chapter, was killed on his bike in a hit-and-run accident on December 2. Warren Police have identified Phil Honzu as the driver of the white-colored Jeep Grand Cherokee that ran a red light, smashed into Mason at a Warren intersection and fled the scene. A warrant was issued last week for Honzu’s arrest<

Mason left behind a wife and four children. He earned a Masters Degree in english literature from Ohio State and was an amateur guitar guru.

Any information on Honzu’s whereabouts are asked to contact the Warren Police Department at 330-841-2512.