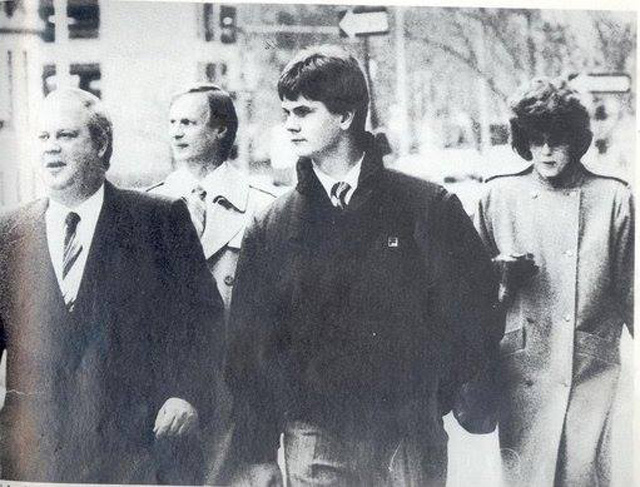 On Super Bowl Sunday, WDIV Channel 4, Detroit’s NBC affiliate, will begin running a five-part expose asking the question why Wershe, 46, remains incarcerated after over 27 years on a single state drug-possession charge spawning from a routine police traffic stop on May 22, 1987.

Award-winning reporter Kevin Dietz will helm the piece. Dietz, a native Michigander, grew up in Bloomfield Hills and has been WDIV’s investigative ace for the last two decades.

The iconic Motor City drug boss, rapped about by a young Kid Rock (“Back from The Dead”) and a proud Detroiter who has staged holiday food drives in the area from behind bars, was just 17 years old at the time of his arrest.

During the late 1980s, his face was a fixture on the local nightly news and frequently splashed across the front pages of the city’s newspapers, as the press and public alike became fascinated by the charismatic fresh-faced juvenile Caucasian’s ascent in the treacherous and basically all African-American Detroit narcotics scene. The love affair he was carrying on with Mayor Coleman A. Young’s favorite niece, Kathy Volsan Curry, a woman almost ten years his senior and the wife of heavily-feared drug kingpin Johnny Curry, the man that mentored Wershe as he climbed the latter on the street, added fuel to an already scorching-hot media firestorm.

What they didn’t know was that Wershe was recruited into the drug game by a federal task force formed in 1984 and made up of members of the FBI, DEA and DPD, encouraged to drop out of high school when he was 14 and put to work as a mole – assertions made by Wershe and his family for years, but only recently confirmed by federal documents and more than one law enforcement official that was intimately involved in his use as an illegal underage informant.

In  April 1985, he provided information on the accidental murder of a 10-year old boy named Damien Lucas, the nephew of a local drug dealer tragically killed in a drive-by shooting intended to strike his uncle and still unsolved to this day. FBI and DEA documents cite an alleged payoff between Johnny Curry and then-DPD Homicide Commander Gil Hill (well-known for his movie role as Eddie Murphy’s boss in the Beverly Hills Cop franchise) to prevent charges from being filed.

Wershe’s relationship with the government was severed in the early fall of 1986, less than a year before he was arrested with eight kilos of cocaine and convicted under the now-defunct “650 lifer law,” former Michigan state legislation that mandated a life prison sentence without the possibility of parole if discovered possessing over 650 grams of a controlled substance. Upon the legislation being overturned in 1998, all people convicted under the law were immediately eligible for parole.

In 1991, Wershe agreed to cooperate with the government: he provided aid to several FBI investigations and gave testimony in front of multiple grand juries and over the next 12 years was integral in dismantling one of the biggest corrupt-cop rings in Motor City history (1993’s Operation Backbone), preventing a high-profile mafia assassination on the east coast and gaining the convictions of numerous Detroit gangland figures.

As of February 2015, Wershe is the only person in the Michigan Department of Corrections still imprisoned under the 650 lifer law.

Back in the early 2000s, Wershe was collared for a minor role in a car-theft scam while serving time in a Florida witness-protection unit. This past summer the U.S. Court of Appeals ruled on a law suit filed by the Wershe family against the Michigan Parole Board ruling that the parole board wasn’t properly handling his file and kicked the case back to a federal court in Michigan for further consideration.

Detroit-based rapper and hip hop superstar Eminem had previously been in talks to adapt Wershe’s life story for the silver screen.

“I just want the truth to come out,” said Wershe in an exclusive interview from prison in Manistee, Michigan Saturday, offering his take on the upcoming TV piece. “I don’t know what more I can do. I hope people can see the injustice. I’m doing all this prison time, but its not for the crime that I was convicted of. I’m not White Boy Rick anymore, that’s who I was when I was 17 years old. Today, I’m just a middle-aged man that wants a second chance.”