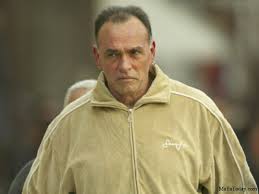 Fellow South Philly wiseguy and mob power Marty Angelina isn’t far away from being able to say the same thing.

Lucibello, 62 and a one-time capo in the notoriously savage Philly LCN crime family, was released from federal lockup Monday morning after almost four years behind bars following a 2012 racketeering conviction.

While Lucibello (pictured above) is hitting the street this week, former reputed syndicate underboss Angelina, 52, landed in a Philadelphia halfway house on January 18 – the same one Lucibello just departed.

The mafia landscape in the City of Brotherly Love they are returning to is faction-heavy, blending gangsters from both the 1980s and 1990s blood-and-guts fueled South Philly mobs who have all trickled out of prison in recent years.

Alleged Godfather Joseph (Skinny Joey) Merlino is in the midst of serving a four-month federal prison sentence for a parole violation and will be back running his brand new Boca Raton Italian eatery by the spring – around the same time Angelina will be getting out of the halfway house. The 52-year old Merlino was convicted in a RICO case blossoming from his activity running the Philadelphia mafia in the 1990s. Since his initial release in 2011, Merlino has overseen the mob in Pennsylvania from afar, living in Florida and ruling through intermediaries such as Steven (Handsome Stevie) Mazzone and John (Johnny Chang) Ciancaglini, according to the FBI. Merlino himself claims he has retired.

Skinny Joey, Handsome Stevie and several of their boyhood chums were groomed in the ways of the mob during the reign of Nicodemo (Little Nicky) Scarfo in the 1980s. They were referred to in the press as the “JV mafia.” Once Scarfo and his administration were off the streets and in jail, Merlino and his pals wound up going to war for control of the crime family with Sicilian Don John Stanfa, who replaced Scarfo in 1990, and eventually won. Mazzone was convicted alongside Merlino in 2001 and was released from his prison sentence in 2008. He’s said to be Skinny Joey’s current street boss and/or acting boss.

Over the last few years, Scarfo-era stalwart Philip Narducci has emerged from a more than two-decade bit in the clink and begun carving out significant territory for himself on the streets of South Philly, per sources, becoming a “serious force” in local mob affairs and aligning with the independent “10th and Oregon crew” for added protection and artillery.

The Pungitore brothers (Joey and Tony), another pair of Scarfo soldiers, have come back to town on the heels of long stints behind bars and some time in the Florida sun and are reputed to be their own entity on the streets, per these same sources. Both Narducci and Pungitore come from rich Pennsylvania mob pedigrees and have other Scarfo regime button men in their respective current inner-circles.

Joseph (Uncle Joe) Ligambi, a man who played a role in both the Scarfo and Merlino eras, held the Family together when Merlino and his crew of staunch loyalists served their prison terms throughout the first decade of the New Millennium, stabilizing the syndicate as “acting boss.”

Known as a savvy mobster once playing a major hand in helping look after the Philly mob’s interests in the video-poker machine business, Lucibello began in the Stanfa camp during the warfare of the 1990s, before switching to Merlino’s side. Stanfa famously threatened to cut off Lucibello’s tongue and send it to his wife in the mail because of the betrayal on an FBI wiretap in 1993. Pennsylvania Crime Commission files pegged him with being in charge of the Family’s illegal numbers racket (“Policy”), first in the Stanfa regime and then under Merlino and his and Philadelphia mob boss-turned-cooperator Ralph Natale’s regime thereafter.

An FBI memo from 1992, reports that Lucibello began his career in the mafia as a driver and bodyguard for Ligambi’s deceased consigliere, Joseph (Joe Crutch) Curro. Lucibello was a pallbearer at Curro’s funeral and New Jersey State Police documents speculated he might have been “acting” consigliere at some point, replacing Curro, who died over a decade ago and helped advise Ligambi as he started his run in the boss’ chair.

Court filings allege that Lucibello got named captain of his own crew early in the Ligambi regime – some say he was bumped down to soldier status in the time leading up to his arrest in 2011, although that’s never been confirmed. Lucibello beat a giant racketeering indictment at trial, which included two attempted murder beefs, in 1996, the same case that put Stanfa away for life.

Rising in stature under Uncle Joe in the early 2000s, he was considered a potential suspect by police in the 2002 Raymond (Long John) Martarano homicide, yet never charged. Martarano, a made guy in the Scarfo era, who had recently been sprung from a 20-year prison term, began stepping on the toes of Lucibello and Lucibello’s bosses in the mob, by trying to muscle his way into the “joker poker” industry (slang for video poker machines placed in bars, restaurants and stores).

Angelina is a childhood buddy of Skinny Joey’s. He fought side-by-side with Merlino and Mazzone in the war and was named underboss at the request of Merlino upon the jailing of Ligambi’s original No. 2 Joseph (Mousie) Massimino in 2005. Although Angelina was officially underboss, according to law enforcement and street sources, Ligambi’s protégé Anthony Staino was more of the everyday second-in-charge.

Back in the early-to-mid 1990s, Angelina was a suspect in a number of underworld slayings, His name surfaced in the press as being involved in a high-profile gangland feud with turncoat mob lackey Louis (Bent Finger Lou) Monticello in the late 2000s, one in which Monticello plotted to physically assault Angelina for perceived slights and continued undermining. Monticello had been an emissary for Angelina’s friend, Ligambi’s nephew and Merlino’s former consigliere, George (Georgie Boy) Borgesi, incarcerated at the time for his role in running the Philadelphia mafia in the 1990s.

Lucibello and Angelina were included in the same so-called “racketeering light” indictment in 2011 that ensnared Ligambi, Staino, Borgesi and Massimino (also already imprisoned on prior racketeering charges), among others.

Staino and Massimino were convicted. Ligambi and Borgesi survived the legal onslaught, enduring two mistrials via hung juries, finally being released last winter. Ligambi has allegedly been given the Family’s consigliere post. Borgesi is reportedly on the outs with some members of the syndicate, with them blaming him for Monticello’s testimony at both mistrials and the accompanying headache.

Uncle Joe was convicted in the 1986 gangland slaying of South Philly mobster Frank (Frankie Flowers) D’Alfonso and sentenced to life in prison, but had the conviction overturned on a technicality in 1997. The Frankie Flowers hit got Ligambi his button (leading to his “making” into the mafia months later).

Another Scarfo era figure back on the scene is 80-year old Joseph (Chickie) Ciancaglini, Sr., a captain under Little Nicky in the early 1980s before being locked away for the last 32 years. Ciancaglini got out of the can late last year and is reputed to be the new underboss, with his son, Johnny Chang holding the “acting” underboss slot.

Johnny Chang had been official underboss, however, gladly gave up the title to his dad when Chickie came home. Chickie isn’t said to be in the best of health and the position might be more titular in nature than anything else, per sources, but he often “chimes in with valuable counsel” and receives a weekly tribute envelope.

Where Lucibello and Angelina fit in with the current Philly mob rank and file remains to be seen.

“Gaeton and Marty will have a place somewhere, the guys in charge are going to take care of them,” said one street source.