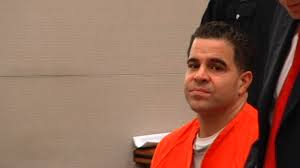 Nicodemo, 43, was reputed to be a trusted up-and-comer in Philadelphia mafia circles prior to his arrest in the DiPietro execution, which took place in broad daylight five minutes from his house at a time when the syndicate’s then-acting boss Joseph (Uncle Joe) Ligambi was on trial for racketeering (charges that eventually resulted in a pair of hung juries and Ligambi’s release from prison last winter).

In the late 1990s, Nicodemo served as a driver, bodyguard and protégé of alleged Philly mob boss Joseph (Skinny Joey) Merlino, currently serving a four-month federal prison sentence for a parole violation. Merlino, 52, has relocated to Florida and is thought to be running the mafia in the City of Brotherly Love via his close friend and reputed street boss Steven (Handsome Stevie) Mazzone and underboss and confidant John (Johnny Chang) Ciancaglini, if you believe the FBI.

NY Times Best-Selling Author and Philadelphia mob journalist icon George Anastasia reported on Bigtrial.net this week that the Family is being guided by a three-person panel while Merlino is away, consisting of Mazzone, Ciancaglini and Philip Narducci, a mobster from the 1980s that has exploded back on the local mob scene since being sprung from his federal prison cell and a more-than two-decade bit.

The Nicodemo case was in state court and was about to begin a second trial before the shocking announcement Friday that Nicodemo would plead guilty. Last year, Nicodemo’s first trial ended abruptly in a mistrial amid rumors of jury tampering.

Prosecutors don’t necessarily believe that Nicodemo was the hit man in the Di Pietro slaying – a mob murder some experts are calling the “dumbest in organized crime history”, speculating that he was most likely driving the getaway car.

DiPietro, a convicted felon who was suspected of possibly cooperating with the government, was gunned down outside his house as he entered his pickup truck on a South Philly street corner on the afternoon of December 12, 2012. Eye witnesses saw a masked man dressed in black unload a 357 magnum revolver into a defenseless DiPietro and then get into a 2007 Honda Pilot and speed away from the scene.

Nicodemo was arrested and taken into custody within a half hour of the deadly incident taking place. Responding law enforcement immediately linked the car to him – courtesy of a witness that jotted down his license plate number – and when they went to his nearby residence they discovered the SUV (registered in his name) and the gun, which ballistics have matched to the fatal shooting.

Sources close to the investigation say the FBI believes fellow mob figure Dominic (Baby Dom) Grande might have been the assassin. Grande, 35 and reportedly mentored in the mafia by Nicodemo and Handsome Stevie Mazzone, has never been charged in the crime – although he went down in a 2008 mob-connected gambling bust. His father is turncoat and former South Philly wiseguy Salvatore (Wayne) Grande, known for his “wet work” and cowboy demeanor when it came to mob affairs in the carnage-filled Scarfo era of the 1980s. Internet sites peg Grande a nephew via marriage to Stevie Mazzone.

Prosecutors in his first trial (where he faced first-degree murder charges), alluded to Grande being the trigger man in the DiPietro hit. According to state police files, Grande was sponsored for membership in the Philadelphia LCN Family by Nicodemo in a late-200os induction ceremony presided over by Ligambi, recently tapped the Borgata’s consigliere upon his return from a more than two-year stay as a guest of the government in the winter of 2014.

Nicodemo himself was “made” in the early-to-mid 2000s and also by Ligambi, the person responsible for looking after the Philadelphia underworld from 1999-2011 on behalf of the imprisoned Merlino (convicted in 2001 in a RICO case). A prime suspect in a number of mob slayings over the past 15 years – per federal documents -, this was the first homicide charge Nicodemo had ever faced.

DiPietro, 50 at the time of his death, grew up in the same neighborhood and attended school with Merlino. He had served seven years in prison on a drug-dealing conviction and had been engaged to be married.

One informant told authorities that 46-year old Nicodemo (Nicky Slick) DiPietro, a convicted murderer and Gino DiPietro’s cousin, bragged in prison of wanting to have Gino DiPietro killed because he provided information to police about his little brother’s criminal activities. Nicky Slick reportedly claims to have been named after and baptized by infamous Philadelphia mafia don Nicodemo (Little Nicky) Scarfo, currently serving life behind bars for a slew of murders he ordered as Godfather of the crime family thirty years ago.

Some in the local mob world feel Nicodemo’s plea seems eerily similar to that of South Philly gangland informer Roger Vella in 2001. Vella, like Nicodemo, a former driver for Skinny Joey Merlino, pled guilty to third-degree homicide charges in state court stemming from the 1995 murder of Ralphie Mazzuca, on the heels of signing a cooperation agreement to enter the Witness Protection Program. He only wound up serving a little more than a decade of prison time. There is no indication that Nicodemo has any intention of joining Team USA and following in Vella’s footsteps.

Mazzuca, a drug dealer and independent street corner tough guy, had perpetrated a home invasion on Vella’s property. Vella told the FBI that he responded by getting permission from Merlino to kill Mazzuca and then received help from Merlino and his future consigliere George (Georgie Boy) Borgesi in carrying out the execution, after which Mazzuca’s bullet-torn body was set ablaze.