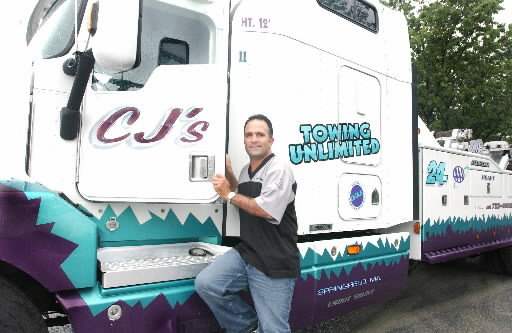 According to federal court filings, Springfield, Massachusetts mobsters Rex Cunningham and Frank (Frankie the Shark) Depergola warned local businessman Craig (C.J.) Morel he was about to be extorted by their Genovese crime family subunit. Then, hours later, he was. The filings were part of pre-trial motions in the upcoming trial of alleged Western Mass mafia crew member Richard (Richie the Postman) Valentini, who along with Depergola and three others were charged with racketeering last year. Valentini’s four co-defendants have all pled guilty.

On September 30, 2013, Morel,  a former cop and felon, as well as the owner of the most successful towing and scrap metal company in Western Massachusetts, was approached by Springfield wiseguys Ralph Santaniello and Johnny Calabrese and told he owed $50,000 in back street tax, $20,000 of which he soon coughed up. Santaniello slapped Morel and threatened to chop off his head and bury it in his backyard if he didn’t pay retroactive tribute to the mob. Morel, 53, was known to have forked over street tax to slain Springfield mob captain Adolfo (Big Al) Bruno before Bruno was killed in November 2003 amid an internal power struggle.

Depergola, 61, was Big Al Bruno’s right-hand man and driver and was with Bruno when he was gunned down in front of his Our Lady of Mt. Carmel Social Club on the eve of his 58th birthday. Along with Santaniello and Calabrese, Frankie the Shark has pled guilty to making extortionate loans — he did federal prison time for racketeering in the 2000s, getting released in the fall of 2008. Rex Cunningham, a legendarily feared loan shark and collector in the area, recently pled guilty to separate state racketeering charges and agreed to spend a year in the county jail.

The 66-year old Cunningham was mentored in the Springfield mafia throughout the 1980s and 1990s by crew elder statesman Mario Fiore. They both worked f

or the notorious Scibelli brothers (all currently deceased). Cunningham cemented his reputation for ferocity by stalking a debtor to his sister’s wake in order to assault him in an attempt to recover $12,000. Fiore is 81 and said to be in semi-retirement.

Back then, Cunningham worked out of Dillon’s Tavern. Per his most recent indictment, he headquartered his modern rackets out of New O’Brien’s Corner Bar & Grill.

His story of chasing down an indebted customer to the 1992 wake was overheard on a bug installed at Dillon’s Tavern.

“Oh yeah, well I got ’em, his sister died. we sat outside the wake,” he said. “That’s where I got ’em. I went myself because, I prefer that. I sat outside the wake. I followed him, a perfect tail. Followed him and as he got out of the car, I grabbed him and threw him outta of the fucking car. I took him behind the Gaslight (Lounge). Had three guys waiting there, we beat him with fucking pipes, tire irons. I dropped his car keys on his chest. I told him we just beat your ass. And I said I’ll call an ambulance for you. We left him bleeding all over the place….When he got out of the car at first, I said to him the bad news is, I said, the bad news is this aint no meeting like I told you. And I said nobody’s here but me and I’m gonna beat your ass. Then I smashed him in the face and he went down and them three guys come out from behind a dumpster a couple minutes later. And I backed off and I said, ‘one guy at a time and don’t hit him in the head’. He went down pretty quick and he didn’t wake up ’til the next week,

The hulking Cunningham spoke with Springfield’s resident mobologist Stephanie Barry in 2011, a little less than a year after he was sprung from a prior prison stint — he compared the differences in the old school to the new school Western Mass mob scene.

“We had a tough group of guys…..if you did something wrong you took a beating,” he said. “There’s still money on the street. Everyone is still taking bets, but it’s a free for all….its’ a viper’s nest of snakes and rats.”

The Springfield mob troop has long reported to New York’s Genovese crime family. The Genovese clan’s reputed point man for the Springfield crew, alleged Connecticut capo Eugene (Rooster) O’nofrio, is set to go on trial in the case in federal court next month in New York.