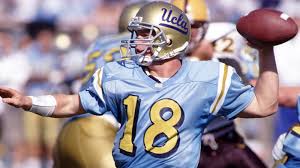 East Coast mob chief Donnie Shacks might have been shacking up with some West Coast college athletes back in the late 1990s…….on a point-shaving scheme to fix UCLA football games.

The UCLA Bruins football program was investigated by the FBI in 1998 and into 1999 related to allegations from informants that All-American quarterback and future NFL first-round draft pick, Cade McNown was shaving points on behalf of the Colombo Crime Family and New York gangster-turned wannabe L.A. impresario Dominick (Donnie Shacks) Montemarano.

Following a racketeering conviction in 1986 and 11-year prison sentence due to his role as a capo in the fractious Colombo clan, Montemarano, a close ally of longtime imprisoned Family boss Carmine (The Snake) Persico, relocated to California alas John Travolta’s “Chili Palmer” character in the 1997 film Get Shorty, at the exact same time the wry gangland comedy was playing in movie theatres around the world.

Was it art imitating life or life imitating art? Who knows. But the similarities are striking.

Like Palmer in the Get Shorty script, Donnie Shacks began dating a silver screen starlet in actress Elizabeth Hurley (Austin Powers franchise, EdTV), investing his money in the film industry and making the rounds on the Hollywood celebrity party circuit. He also began hosting a series of Monday Night Football-watching parties at his swank Beverly Hills home, which quickly started drawing a high-profile, “industry jet-set” crowd. FBI surveillance records indicate in addition to McNown and some of his Bruins teammates, NFL Hall of Famer and one-time UCLA quarterback Troy Aikman and former UCLA player and head coach Rick Neuheisel attended the get-togethers as well.

The FBI probed, but never brought charges regarding the relationship between Montemarano and McNown and the possibility they might have been teaming to try and manipulate the outcome of UCLA football games during the 1998-1999 campaign. Concerns within the L.A. FBI office began popping up, according to federal documents related to the Colombos, after a November 7, 1998 game where UCLA beat Oregon State 41-34 and McNown threw the game-winning touchdown in the final seconds, but the Bruins failed to cover the 12-point spread.

Further eyebrows were raised the next month when Donnie Shacks, accompanied McNown and his parents to the Heisman Trophy presentation at the New York Athletic Club (McNown was a finalist for the award) and then to the NFL Draft in April 1999 when he was selected 12th overall by the Chicago Bears.

Signing a 22 million dollar contract with Chicago, McNown’s pro career flamed out fast and he was out of the NFL within five years. 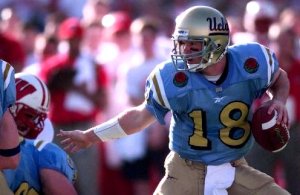 Busted for domestic abuse in the early 2000s, Montemarano had to return behind bars for a brief stint on a parole violation (2004-2007). New York mob experts peg Donnie Shacks a current administrator in the Colombo Family, possibly as high up as Underboss.

Montemarano got his start in the 1960s under the infamous Joseph (Crazy Joe) Gallo  and his two brothers, Larry and Albert (aka “Kid Blast”) and received his nickname at a young age due to his being a ladies man and having a penchant for “shacking up” with multiple women at the same time.