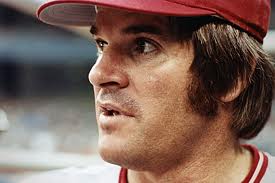 Pete Rose and the Mafia

When iconic Major League Baseball star Pete Rose bet on sports, he bet with the mob.

Rose, who was hit with a lifetime ban from baseball after it was discovered he wagered on games he was involved in as a manager with the Cincinnati Reds in the late 1980s, placed bets with a series of mafia-backed bookmaking operations in various different regions of the country through his more than two-decade career in the Bigs, according to FBI files and the famous MLB-issued Dowd Report related to his expulsion.

Despite his statistics ranking up there with the best of all-time (most career-MLB hits), due to his ban, which came down in August 1989, Rose is not enshrined in the Hall of Fame.

While living on the East Coast, Rose bet through the Philly-based Bruno-Scarfo organized crime family and more than one New York mafia syndicate, while in the Midwest, he put his wagers down with the Chicago Outfit (local slang for the Windy City mob), per federal documents and the Dowd Report.

Rose’s main bookie when he was with the Reds was Ronnie Peters of Dayton, Ohio. who “kicked up” to Chicago mob crew leader Dominick Basso. A close friend of Outfit powers Ernest (Rocky) Infelice, Donald (The Wizard) Angelini and Dominic (Large Dom) Cortina, Basso was put in charge of all gambling operations in suburban DuPage County, Illinois until he died of natural causes in 2001.

The Dowd Report cited at least a half-dozen incidents where Rose bet directly with Basso, phoning him at his Chicago residence to call-in his wagers. Rose denied knowing Basso. Peters survived being shot in the head in 2002.

In the 1980s, Rose got hooked up with a Staten Island, New York-based bookie named Richard (Big Val) Troy and began betting significant chunks of cash on a number of different sports through him. Troy was linked to mobsters in the Bonanno, Colombo and Genovese Families. By mid-decade, Rose, according to the Dowd Report, owed Troy $200,000 in gambling debts.

Using his contacts in the underworld to finagle a labor union job, Troy was busted in 2003 for illegal union activity and organized crime ties. Also part of the 2003 bust were high-ranking New York Mafiosi John (Jackie Zambooka) DeRoss of the Colombos and Ernest (Ernie Boy) Muscarella and Pasquale (Scop) DeLuca of the Genoveses.

Today, Rose is 73  and still fighting to get reinstated into baseball. Following years of denying the accusations of his gambling on games he participated in, he finally came clean and admitted to betting on the Reds while managing them (1984-1989) in his 2004 autobiography entitled ‘My Prison Without Bars.’