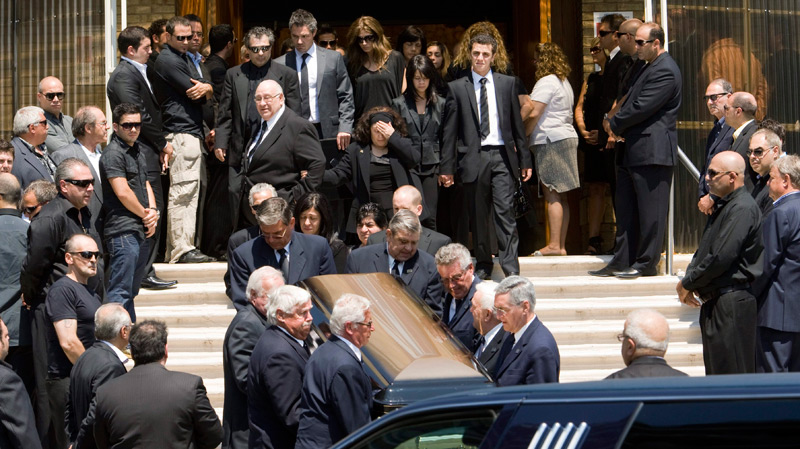 A year removed from the brazen gangland slaying of notorious Canadian mob hit man, Salvatore (Young Gun Sam) Calautti, detectives in Toronto have released surveillance video from a nearby business that shows a white van driving past the vehicle that Caluatti and his bodyguard Jimmy Tusek were killed in during the early-morning hours of July 12, 2013 before police arrived on the scene.

Toronto police are looking for help from the community to identify the vehicle and its’ driver and/or owner. It’s not being revealed if authorities in the investigation believe the white van was carrying a potential witness to the murder or the actual murderer or murderers themselves.

Calautti, 40 years old and a suspect in a half-dozen mafia-connected murders at the time of his death, was a major player in a gore-ridden mob war that has ripped across Canada’s underworld the past five years, leaving at least 15 bodies in its wake.

The trigger-happy enforcer sided with Raynald Desjardins and deported New York Godfather Salvatore (Sal the Ironworker) Montagna in the bloody dispute against longtime Montreal don Vito Rizzuto, who was imprisoned when several of his top lieutenants joined forces with the young and power-hungry Montagna, opposed his reign and took aim at his inner-circle.

Rizzuto’s father, son, best friend and brother-in-law were all murdered while he sat helpless behind bars in an American prison for his role in the infamous 1981 “Three Capos” hit in New York, where the Bonanno Crime Family used him to help settle internal turmoil that still existed after the assassination of boss Carmine (The Cigar) Galante two years before.

Investigators peg Young Gun Sam as the prime suspect in the 2010 sniper-slaying of Nicolo (Uncle Nick) Rizzuto, Vito’s father and an internationally-respected mob czar himself, gunned down inside his kitchen as he sat down for dinner with his wife. Informants told police that Caluatti frequently bragged about shooting the elder Rizzuto with a sniper’s rifle from the backyard of Rizzuto’s Montreal mansion.

Upon Vito Rizzuto’s release from prison in December 2012, he became hell-bent on revenge and went on a rampage avenging the deaths of his family members – Caluatti was at the forefront of his hit list.

Attending the bachelor party of a friend of his at Terrance Banquet Centre in the Toronto suburb of Vaughan on the evening of June 11, 2013, Young Gun Sam and Tusek excused themselves from the festivities after midnight to smoke cigars in Caluatti’s car. As they sat in the front seat of the vehicle puffing away on their stogies, they were both shot to death around 1:00 a.m. June 12.

In a press release last week, Toronto’s York Police Department requested to speak to the driver of the white van. It’s not known for sure if authorities believe the person was merely a witness to the crime or the possible “doer.”

Groomed by Toronto mobster and convicted killer, Jimmy DeMaria, the man that nicknamed the fearless fast-riser “Young Gun Sam,” per a Canadian organized crime report, due to his quick ascent and even quicker trigger-finger, Caluatti took over as the main muscle in Toronto after the murder of Gaetano (Guy) Panepinto in October 2000. Panepinto was gunned down by a shooter in a passing van on Highway 27 as he drove in his maroon Cadillac. Caluatti was the top suspect in the Panepinto hit and then assumed Panepinto’s job.

Two years prior to Panepinto’s slaying, Caluatti was acquitted at trial on charges that he killed Joe Congiusta instead of repaying a debt on September 5, 1996, outside a Toronto social club Congiusta was known to spend time at.

Caluatti was the owner and operator of a pizzeria and gelato shop when he died.

Desjardins goes on trial in January on charges that he engineered the 40-year old Montagna’s murder in November 2011, two months removed from Montagna ordering an unsuccessful attempt on Desjardins’ life.