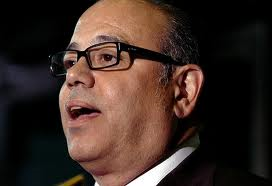 Chicago mafia associate Jeff Hollingshead has caused his former superior in the mob Bobby Panozzo some serious legal headaches lately. Famously flamboyant Illinois criminal defense attorney Joe (The Shark) Lopez, a mouthpiece and litigator for numerous high-profile Chicago mobsters and underworld characters, alike, over the past 25 years, could be in for a doozy of a migraine via Hollingshead in the near future, too.

Hollingshead began cooperating with the government in November 2013, after pleading guilty to kidnapping a wheelchair-bound street gang member and holding him for ransom and getting bit with a 15-year prison term in return. Once he flipped, Hollingshead, 48 and a former trucker and Teamster, spilled the beans on Outfit Grand Avenue crew veteran Panozzo and the vicious robbery ring he was allegedly in charge of with his buddy and fellow Chicago underworld stalwart Paul Koroluk.

Panozzo, 54, and Koroluk, 55, were indicted on federal racketeering charges related to the burglary operation that primarily targeted drug houses in and around the Chicagoland area earlier this month, caught in the act on July 16, apprehended while walking away from a police sting that set-up a fake narcotics stash to rob and ensnare the “P-K Crew.”

The indictment, which refers to Hollingshead only as “Individual H” (Hollinghead’s identity was confirmed by the Chicago Tribune), cites an incident last year while he was out on bond awaiting trial on his kidnapping charges when Panozzo and Hollingshead planned to murder a witness in Hollingshead’s case. The murder never came to fruition because the witness had gone into hiding and couldn’t be found by Panozzo, Hollingshead and others members of the P-Ks. However, in the midst of trying to locate him, Panozzo and Hollingshead got a pretty good lead on where their attempted target might be discovered.

According to the indictment, Hollingshead met with his lawyer, identified as, “Individual K,” at a coffee shop on Maxwell and Halstead, just outside the city’s Little Italy neighborhood on Taylor Street, and was passed a printout of the witness’ home address.

“Give this to Bob, he’ll know what to do with it,” said the lawyer. “This is your only problem.”

Court records show Hollingshead’s attorney at that point in time to be none other than Joe Lopez.

Reached for comment by the Chicago Tribune this week, Lopez admitted meeting Hollingshead at a Caribou Coffee last July and giving him a copy of an investigative report his firm’s private detective compiled that contained outdated contact information for that particular witness. Lopez told the Trib that it’s a normal pre-trial course of action and that they were trying to locate that witness, as well as all the others, but solely, to his knowledge, for interview purposes leading up to trial.

“No matter what the situation was, it doesn’t look good,” said one colleague of Lopez’s in Chicago’s criminal-defense world that wished to go unidentified. “Joe is treading on some very thin ice here, he could be in some real trouble down the line as this Panozzo case plays out in the future.”

Nicknamed the Shark for his aggressive courtroom tactics, Lopez, 58, has recently represented Drew Peterson, the Chicago cop convicted of killing his wife in 2012 and repped notorious Outfit mob hit man Frank (Frankie the Breeze) Calabrese in the epic Family Secrets trial in 2007 that brought down a number of leaders of the Windy City mafia and solved the infamous “Casino Murders” (the double-homicide of mobster Tony Spilotro and his younger brother and protégé Michael depicted at the conclusion of the Martin Scorsese movie, Casino, with Joe Pesci playing the Spilotro role).

Lopez has a reputation for often being flashier than his gangster clients. He frequently dresses in expensive, loud-colored suits, tightly coordinating ensembles that usually includes matching sock and tie hues. During the Peterson trial, Joe the Shark and his attractive, younger wife, law partner and co-counsel, Lisa, 36, dressed in matching colors, occasionally of the neon variety. Lisa Lopez took a felony theft arrest as a teenager in 1997.