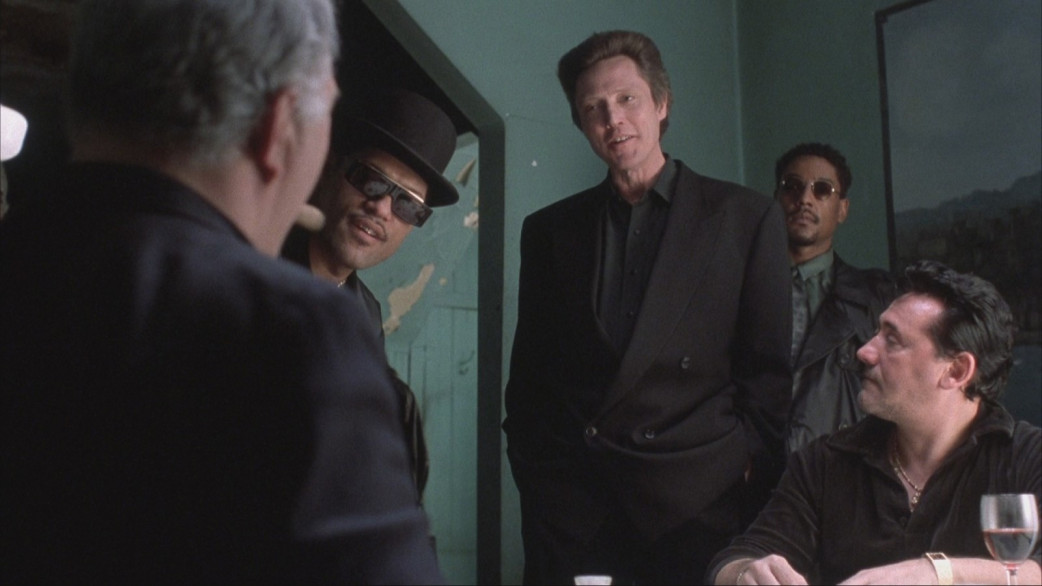 A certified urban legend in the Midwest underworld, the 86-year old Cox was finally paroled this week via a compassionate release following three decades incarcerated in federal prison on an array of racketeering counts. Walken’s performance as the ruthless Plaza Hotel-headquartered parolee and bi-racial crime baron intent on taking over the Big Apple resonated on the streets with a cross-section of real-life gangsters and up-and-coming hip hop artists.

The legendary Brooklyn rapper Notorious B.I.G. adopted the alter-ego Frank White in his onstage and on-wax persona. Also referred to as Biggie Smalls, the Notorious B.I.G. was murdered in Los Angeles in March 1997 in a still-yet-to-be-cracked, heavily-scrutinize first-degree homicide.

Walken is an icon in American cinema, known for playing dark roles, like his turn as Frank White in King of New York, considered by many movie buffs one of the best neo-noir crime thrillers of the late 20th Century. In 1980, Walken won the Academy Award for Best Supporting Actor in Deer Hunter, portraying a disturbed Vietnam vet who never leaves Southeast Asia and plays Russian Roulette for a living in the back alleys of Saigon.

Along with James (Doc) Dearborn and Eugene (Seal) Richardson, Cox founded the Kansas City Black mafia in the late 1960s. Cox has a genius IQ and was the brains behind the brawn of Dearborn and Richardson. He provided critical counsel to the slick-talking and fast-shooting Doc Dearborn and recruited the fearsome-reputation bearing Richardson for muscle. The trio became the K.C. Black mob’s hierarchy for the next 20 years. Dearborn was viewed as a “first among equals” and the face of the operation in the press. The group was encamped on the city’s eastside.

In real life, Eddie Cox was more well-rounded a criminal than the Frank White character. Renowned for his jack-of-all-trades skill set on the street, Cox knew how to make money both by force and finesse. At various times, he acted as a K.C. Black Mob, shot-caller, Doc Dearborn’s No. 2 man, Dearborn’s top adviser and enforcer and a brilliant narcotics trafficker in and out of the organization’s purview.

Doc Dearborn was slain gangland style in 1985, gunned down in the parking lot of a motel by the airport during a drug deal. Cox was indicted in 1990 for drug trafficking, burglary, armed robbery, weapons offenses and impersonating a federal officer. Actor and comedian Chris Rock portrayed a character based on Dearborn in the most recent season of the critically-acclaimed FX anthology television show Fargo

Throughout his time in prison, Cox crafted a reputation as an elite jailhouse attorney, aiding dozens of prisoners in getting convictions overturned and new trials. According to his family, he plans on living in Springfield, Missouri with his daughter.

Over the past decade, Cox has helped investigators in the cold-case murder probe surrounding the July 1970 assassination of Missouri state legislator and civil rights activist Leon Jordan. Cox told cold-case squad detectives that Jordan was murdered on a hit placed on his head from Kansas City’s Italian Civella crime family for refusing to back a bill favoring the loosening of restrictions related to the state’s bar and strip-club industry being heavily pushed by associates of the Civella clan.

The Civella crime family and the Dearborn crew worked in tandem in a number of rackets in Kansas City. Doc Dearborn was indicted for playing a role in Jordan’s murder, but the charges were eventually dropped. Cox absolves Dearborn of being the triggerman in the hit as he was accused of back in the early 1970s.