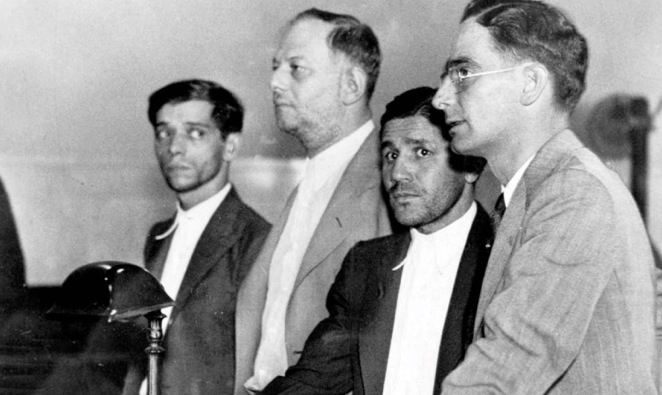 As iconic as they were violence-prone, the Purple Gang, an all-Jewish mob and Detroit’s premier Prohibition Era bootlegging brigade, ruled the Midwest illegal-booze market for less than a decade (from roughly 1925 through 1933), but their legacy still endures to this very day. Universally respected and feared throughout American underworld circles in its’ heyday and well beyond, the Purple Gang was allegedly responsible for hundreds of gangland slayings and made tens of millions of dollars in liquor smuggling and sales, gambling, extortion, hijacking, kidnapping, prostitution, labor racketeering and narcotics trafficking.

Founded and led by the four Burnstein brothers (Abe, Joe, Ray & Izzy), the gang included roughly 50-to-100 men and attained worldwide infamy and pop culture prestige rivaled in mob lore only by Chicago’s Al Capone and Murder Inc. of New York – the Purples did frequent business with both groups over the years. Once Prohibition was repealed in 1933, Abe Burnstein, the eldest of the Burnstein brothers and the Great Lakes region’s legendary Jewish Godfather, opted for early retirement and voluntarily let his criminal empire be taken under the banner of his allies in the Detroit Italian mafia. Abe Burnstein died of a heart attack in 1968 in his longtime home in a penthouse suite at the Book-Cadillac Hotel, the old Purple Gang headquarters.

March 28, 1927 – The Milaflores Apartment Massacre: Independent racketeers Frankie Wright, Joe Bloom and George Cohen were lured to the Milaflores Apartments under the pretense of retrieving a kidnapped associate of theirs and instead were machine-gunned to death by a Purple Hit team consisting of “Siamese Twins” assassins Eddie Fletcher and Abe Axler, Fred (The Killer) Burke and Joseph (Joe Honey) Miller. Wright was from Chicago and Bloom and Cohe came to Michigan from New York – together they started doing muscle work and running a kidnapping-for-ransom scam, murdering a pair of Purple Gang affiliates and nabbing Purple-connected hoodlums in their ransom routine. The Milaflores Massacre was the first machine-gun slaying in state history and set the tone for the gang’s epic level of ruthlessness regarding friend and foe alike going forward.

*Fletcher & Axler are pictured with their attorneys in this article’s featured image.

February 14, 1929 – The St. Valentine’s Day Massacre: The Purples gave a helping hand to Southside Chicago Italian mafia boss Al Capone in delivering a deathblow to his opponents in his war with the Windy City’s Northside Irish mob, providing Capone a set-up plan, a triggerman (St. Louis “Egan Rat’s” transplant Fred Burke) for his hit squad and a cadre of lookout men (Eddie Fletcher, Abe Axler and Harry & Phil Keywell) for the famous mass murder that drew headlines around the globe. The massacre occurred at a Northside auto garage hangout and claimed the lives of seven Northside mob lieutenants, including the gang’s top two enforcers, Frank & Pete Gusenberg, the gang’s second-in-command Albert (Jimmy Clark) Kaschellek, the gang’s top blind pig extortionist Albert (Gorilla Al) Weinshank, a gang bookmaker Reinhardt (Doc) Schwimmer, the gang’s accountant Adam Hayes and Johnny May, a mechanic in the gang. With a single call from Detroit, the Burnstein brothers had drawn the Northsiders garage the morning of Valentine’s Day with the promise of a discounted batch of boosted liquor fresh from Motown and a squad of assassins showed up instead dressed as police, lined everyone up against the wall and killed them all in a hail of machine-gun fire.

July 27, 1929 – Purple Gang lieutenant Irving (Little Irv) Shapiro, known for his loud, lethal and garish behavior, is found dead in a ditch, shot in the back of the head and tossed from a moving automobile. Shapiro was one of the gang’s most feared strong arms and hitmen. He was suspected of stealing from his Purple bosses and angering them with his reckless antics.

October 28, 1929 – Purple Gang lieutenant Zigmund (Ziggie Fingers) Selbin, a young, crazy street hood and protégé of the unstable Little Irv Shapiro, is shot to death on the city’s Westside. Selbin, only 22, earned his nickname for cutting off a rival’s finger so he could take ownership of a diamond ring over a debt.

July 22, 1930 – Detroit teenager Arthur Mixon (15) is killed by the Purple Gang for entering a syndicate bootlegging plant without permission and mouthing off to the Purple strong arms who tracked him down to confront him about the indiscretion. Phil Keywell, one of the lookouts in the St. Valentine’s Day Massacre, was convicted for shooting the African-American Mixon to death on a eastside Detroit street corner.

July 22, 1931 – Purple Gang member Earl Passman is shot to death by fellow Purple Ganger Hyman (Two-Gun Harry) Altman in a prank gone very wrong: Passman locked Altman in a closet as a joke and Altman shot his way out, killing Passman in the process.

September 16, 1931 – The Collingwood Manor Massacre: When the Purple Gang’s booze-smuggling subunit known as the Little Jewish Navy began making plans to break off into the bootlegging industry on its own, the Purples’ purged the subunit’s treasonous leadership of Isadore (Izzy the Rat) Sutzker, Joseph (Black Joe) Leibowitz & Harold (Hymie) Paul in a triple slaying carried out by a three-man Purple hit team in the Collingwood Manor Apartments and spelled the beginning of the end of the syndicate’s memorable reign. Ray Burnstein was quickly arrested and convicted for masterminding the massacre. Harry Keywell, one of the lookouts at the St. Valentine’s Day Massacre, went on to be convicted of being one of the shooters in the triple homicide.

November 26, 1933 – The Siamese Twins Slayings: Purple Gang enforcers Eddie Fletcher and Abe Axler, referred to as the “Siamese Twins” for their constant companionship in the Motor City rackets, were slain side-by-side in Bloomfield Hills, Michigan, shot to death at close range in a car on the side of the road after a night of carousing at a nearby beer garden and left in the back of the vehicle with their hands intertwined. Fletcher and Axler were New Yorkers who came to Detroit in the mid-1920s to work as muscle for the Burnsteins in the “Cleaners & Dyers War,” the gang’s street taxing of the area’s dry-cleaning industry. They were marked for death after allegedly double-crossing the Burnsteins and their close friend and favored enforcer Harry (H.F.) Fleisher in a business deal. Fleisher was one of the main suspects in the double homicide as well as a triggerman in the Collingwood Manor Massacre.

December 3, 1934 – Oakland Sugar Gang boss Henry Shorr, the Purple Gang’s mob mentor, disappears, and is allegedly bumped off by his one-time “students” in a business dispute over a brewery with his former pupils and partner in the Oakland Sugar House Gang, Charles Leiter. H.F. Fleisher was considered the No. 1 suspect in the hit. Shorr’s son, Mickey, was a popular disc jockey and radio personality in Detroit in the 1950s and 1960s prior to starting a successful stereo equipment franchise.

August 29, 1937 – Nightclub valet Willie Holmes is accidentally killed in a car bomb, blown up in renegade Purple Ganger Harry Millman’s brand new Cadillac LaSalle’s Coup in an attempt on Millman’s life in the parking lot of Club 1040 staged by the Detroit’s Italian mafia in their heated feud with the Burnstein brothers’ former bodyguard and driver following the Purples disbanding in the wake of Prohibition.

November 24, 1937 – The Thanksgiving Night Massacre: Boss of the so-called “Junior Purple Gang,” Harry Millman and his two bodyguards Harold (Big Harry) Gross and Harold (Hymie) Cooper were gunned down in a crowded Boesky’s Deli’s while having a post Turkey Day feast drink by Murder Inc. assassins Harry (Pittsburgh Phil) Strauss and Harry (Happy) Maione dispatched from New York City for the job. Millman couldn’t get along with his new bosses in the Italian mafia, specifically beefing with Detroit mob street boss Joseph (Scarface Joe) Bommarito. At the time of Millman’s murder, he was one of the prime suspects in the Eddie Fletcher and Abe Axler slayings almost three years later to the day, a double homicide authorities speculate Millman did with H.F. Fleisher.

May 16, 1938 – The Doherty Hotel Murder: Purple Gang lawyer and business associate Isaiah Leebove is shot to death by oil-field expert Carl (Texas Jack) Livingston, his distant cousin and partner in the Mammoth Oil Co., as he dined with his showgirl wife and Purple Ganger Sam (Fatty) Burnstein, the Burnstein brothers first cousin, at the Doherty Hotel in downtown Clare, Michigan. Livingston was acquitted on first degree murder charges via an insanity defense and would die of a drug overdose less than a decade later – the two were fighting over business affairs. The Burnsteins and Leebove and Livingston, both connected to east coast Jewish mobster Meyer Lansky, founded Mammoth Oil together in the early 20th Century mid-Michigan oil rush. Original Purple Gang lieutenant Sam (Uncle Sammy) Garfield, another Lansky confidant, fronted the Burnsteins’ interests in the oil trade and had relocated to Clare, a two-and-half hour’s drive from Detroit, since the late 1920s.

January 11, 1945 – Michigan State Senator Warren Hooper is shot to death driving home from the state capital in Lansing to his home near Albion for his decision to cooperate with investigators in a political corruption probe looking into mob payoffs in what is known as the “final” Purple Gang murder. H.F. Fleisher, his baby brother Sammy and his Purple protégé Myron (Young Mikey) Selik were convicted of conspiracy in the Hooper hit and all time prison time for the crime. Some federal informants pointed to an incarcerated Ray Burnstein as the triggerman in Hooper’s murder, theorizing he was let out of lockup in state prison for the day with a payoff and subsequently stalked and assassinated the turncoat senator.