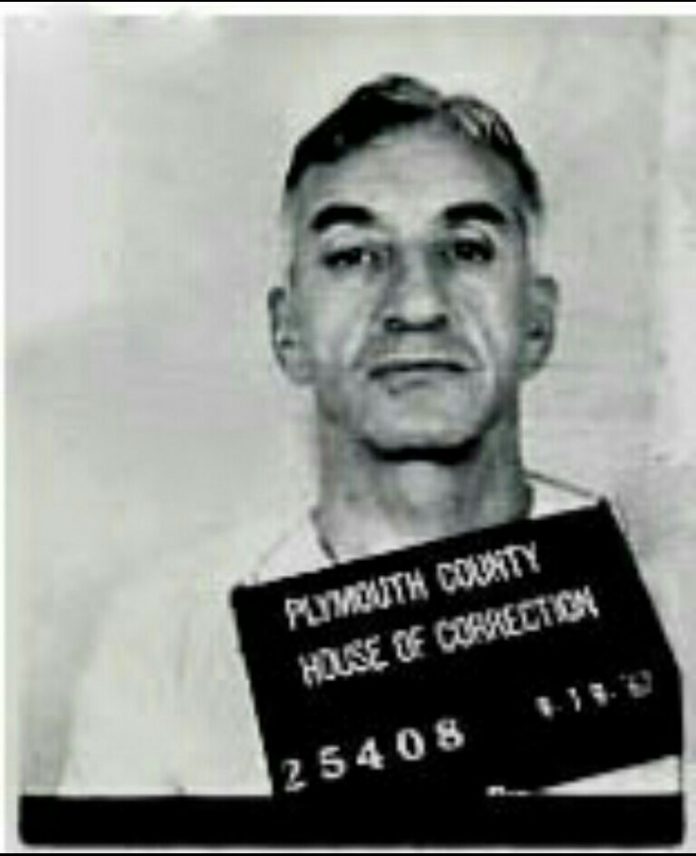 May 24, 2022 — Legendary New England Mafia shot caller Jerry Angiulo spoke freely on an FBI bug of the difficulty in locating and killing Boston mob associate Angelo (Angie Hole-In-The Head) Patrizzi back in 1981 and his lack of discretion led to the downfall of the Angiulo crime empire centered in Boston’s North End. Patrizzi was found hogtied in the trunk of his car in Lynn, Massachusetts on Jume 11, 1981 after vowing to kill Angiulo and two of his lieutenants as a means of avenging the grisly death of his big brother three years earlier.

The 38-year old Patrizzi literally had a hole in his head from a 1971 shooting in a Charlestown tavern. He was sent to prison in 1975 for attempted murder. His half-brother, Joseph (Joe Porter) Patrizzi was gunned down in Revere, Massachusetts on November 11, 1978 after he was caught skimming Angiulo-regime loanshark and extortion payouts on his collection routes.

Patrizzi and William (Skinny Bill) Kazonis were partners in a mob-shakedown racket and each did three years behind bars from a 1973 case. Joe Porter’s bullet-ruddled body was found in the trunk of a stolen car in Revere’s Sons of Italy Social Club parking lot. “Skinny” Kazonis became Angiulo’s Greek crew boss and was found guilty of witness tampering in connection with Angiulo’s final case.

Angiulo lorded over the Boston underworld as the Patriarca crime family’s No. 2 man — to Providence Godfather Raymond Patriarca — from the late 1950s until his bust in October 1983. His four brothers, Danny, Frankie, Milkey and Nicky, served as his loyal henchmen, Danny providing the muscle, Frankie working the numbers as the Patriarca’s unofficial accountant and CFO.

The Patrizzi brothers belonged to the New England mob crew of Sam (Sammy Granite) Granito, one of Angiulo’s top capos during his near 30-year run atop the Beantown rackets. Angie Patrizzi, built like a five-story building and known to be ornery and dim-witted, blamed Angiulo, Granito, Larry Zannino, Angiulo’s second-in-command in the North End, and two Revere mob soldiers Freddy (The Neighbor) Simone and Connie (The Cowboy) Frizzi, for his brother’s slaying.

Granito ran the rackets in Revere. Angiulo and Zannino allegedly green-lit the Joe Porter hit, gave it to Granito, who assigned Simone and Frizzi to carry it out, per FBI informant files. A drunken and proud Zannino was caught on tape of boastfully announcing Angie Patrizzi’s murder at a North End poker game and party in

It wasn’t an easy task to accomplish.

When Patrizzi was released to a South Boston halfway house that January, he told the admissions officer at thew facility he intended on hunting down Angiulo and his crew “like animals” and killing them “like dogs in the street,” per FBI records. Freddy Simone got him situated — bought him some clothes, gave him some cash, lent him a car –, only to keep an eye on him for Angiulo and Granito, according to court documents. Simone got Patrizzi a job at Surf Auto Body Shop in Revere, too, the documents reveal.

By the end of February, the Boston mafia had lost track of Patrizzi. The halfway house listed him on “escape status” on March 3. After snuffing out a plan to murder him hatched by Simone (the fact that a bunch of young-gun mob guys known for sleeping late were there to meet him at the auto body shop bright and early one weekend morning tipped him off), Patrizzi split town and stayed off the radar. At least for a few weeks. He came back for St. Patrick’s Day though and attended the city’s famous St. Patrick’s Day Parade.

On the evening of March 30, 1981, he was kidnapped by a group of Revere and North End mob figures at the Topcoat Club in Revere and placed into the trunk of his vehicle, his limbs trussed like a pig, forcing him to choke himself to death. Patrizzi’s body sat lifeless in the trunk of that car for almost three months until the odor emanating from the vehicle alerted authorities in June.

The feds struck gold with the bug they placed in Jerry Angiulo’s North End headquarters known as the “Dog House” on Prince Street, gleaning enough intelligence on the Patrizzi hit to sink the entire Angiulo mafia-kingdom ship. Angiulo was caught talking about attempting to locate and kill Patrizzi in numerous conversations with Zannino, Granito and others between January and May of 1981.

Angiulo was indicted in late 1983 and convicted at federal and state trials respectively in 1986 and 1987. He died of natural causes in 2009 at the age of 90, having been released on medical-related parole less than two years prior.

Freddy Simone, a reputed capo in the Patriarca clan today, went down with Angiulo at his 1986 trial. Alleged Boston mob soldier Pryce (Stretch) Quintina, 82, is still considered a suspect in the Patrizzi hit. Zannino and Granito both died in prison.