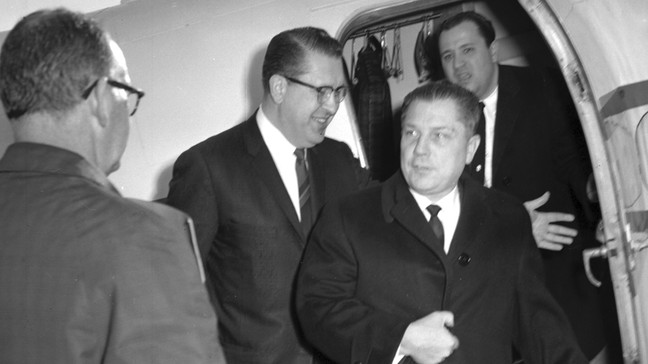 May 26, 2022 — New York mob attorney Gino Gallina was killed for what he may have known about the Jimmy Hoffa disappearance, among other reasons, according to FBI records and a new book on New York’s Purple Gang, a notorious “JV mob” operating out of East Harlem and the Bronx in the 1970s. Hoffa has been missing almost a half century and the lore and speculation about his fate and final whereabouts are heavily steeped in American pop-culture mythology.

‘Another in a long line of digs for Hoffa’s remains is expected to take place in the coming weeks under the Pulaski Skyway in Jersey City, New Jersey at the site of a former trash dump. Gallina’s execution was one of several deep-dived in Scott Deitche’s new book, Hitmen: The Mafia, Drugs & The East Harlem Purple Gang published this month by Rowman & Littlefield.

The East Harlem Purples took their name from Detroit’s Jewish mob during Prohibition, a vicious band of bootleggers, hired guns and extortionists name-checked in Elvis Presley songs and James Bond novels. Many of the “Superfly Era” Purples went on to become captains, administrators and dons in the Genovese, Lucchese and Bonanno crime families, respectively, in New York. Hoffa himself had a multitude of ties to the original Purple Gang in Michigan, as the Teamsters in Detroit often used Purple Gang labor-consultation firms to keep peace in the union’s rank-and-file.

Handsome, flashy and fast-talking, Gino Gallina would often run messages and money between and for a series of different criminal figures, including a number of Purples, Big Apple and Garden State mafiosi and African-American drug lords like Frank Lucas and Nicky Barnes. Lucas’ name surfaced as a prime suspect in Gallina’s murder after cash Gallina was left responsible for by Lucas went up in smoke while Lucas fought a case behind bars — some speculate the amount was more than $3,000,000, a half-million of it earmarked for a fixed case that never got fixed. Academy Award-winning actor Denzel Washington famously portrayed Lucas in the 2007 film American Gangster.

Gallina was gunned down on the evening of November 3, 1977, exiting his Cadillac in front of his mother’s residence in the West Village. Gallina’s mother was hosting out-of-town guests and Gallina and his girlfriend (wounded in the attack) were on their way to her house for a visit after having dinner at a chic Chelsea bistro. The neighborhood where Gallina was murdered was controlled by the Genovese mob.

Per NYPD documents, the 42-year old Gallina was thought to be aiding the Purples in their narcotics and kidnapping-for-ransom rackets. He had spent four years in the Manhattan DA’s office before opening up his own private criminal defense practice and becoming a go-to legal mouthpiece for a slew of high-profile mobsters, gambling bosses and dru

Facing a drug case of his own, Gallina flipped and began wiring up for the FBI. NYPD homicide files show he was wearing a recording device on the night he was killed. He was on the verge of testifying in front of a federal grand jury at the time of his death.

New York’s Genovese crime family held a particular interest in Gallina keeping his mouth shut. A major part of that interest revolved around the now-iconic Hoffa case, still unsolved and depending on the results of the upcoming Jersey dig, possibly cold as ever.

Some in the mob feared Gallina had information on the kidnapping and murder of Teamsters boss Jimmy Hoffa, who vanished from a suburban Detroit restaurant’s parking lot on the afternoon of July 30, 1975 on his way to a lunch meeting with Detroit mafia street boss Anthony (Tony Jack) Giacalone and New Jersey mob capo Anthony (Tony Pro) Provenzano to discus Hoffa’s desire to reclaim the union’s presidency. Tony Pro was the Genovese family’s point man in the labor union. The mob didn’t want Hoffa to return to union affairs and it is believed to have murdered him to prevent that from happening.

Gallina told people he knew who the killers were and had secret recordings related to the Hoffa case that could help investigators solve the mystery locked away in a safe-deposit box. One of the men Gallina was alleged to be feeding the feds intel on was suspected Hoffa hit-team member Salvatore (Sally Bugs) Briguglio, Tony Pro’s right-hand man and top enforcer. Another was then Genovese capo Vincent (The Chin) Gigante, the Godfather of Greenwich Village and the crime family’s future boss. Dubbed the “Oddfather,” by the NY tabloids because of his feigning mental-illness as a ploy to avoid prosecution, Gigante rose to become one of the most powerful crime lords in the world until his racketeering and murder bust in 1997.

Briguglio, 48, was slain in front of a Manhattan social club in Little Italy on March 21, 1978. Provenzano was found guilty of an unrelated Teamsters-connected mob hit and wound up dying in prison of a heart attack in 1988.

Giacalone would be convicted in a tax evasion and extortion case in the years following Hoffa’s disappearance, but did only seven years in prison and died a free man in 2001, out on bond and under indictment on federal racketeering charges. The FBI thinks Giacalone quarterbacked the Hoffa murder conspiracy.