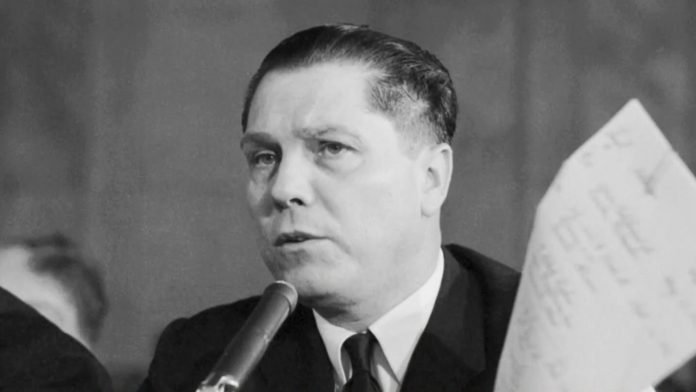 Teamsters boss Jimmy Hoffa was kidnapped and murdered on July 30, 1975 on his way to a mob-style sit down with Detroit mafia street boss Anthony (Tony Jack) Giacalone and New Jersey mafia capo Anthony (Tony Pro) Provenzano to talk about Hoffa’s desire to return to the union presidency which was being opposed by his one-time benefactors in the underworld. The sit down was supposed to take place in Bloomfield Township, Michigan at the Red Fox restaurant, less than 10 miles outside Detroit’s city limits.

Hoffa was witnessed getting into a car in the parking lot of the Red Fox late that afternoon and never seen again. His body has never been unearthed and nobody has ever been charged in the now-iconic crime.

However, in the years following Hoffa’s disappearance, people connected to him and the murder conspiracy that brought an end to his historic reign in organized labor began being murdered themselves. Five victims popped up between the fall of 1977 and the summer of 1984, all mob-connected and all, at least loosely, linked to Hoffa’s kidnapping and homicide.

November 3, 1977 — New York mob attorney Gino Gallina is shot to death as he exits his vehicle in front of his mother’s home in the West Village. He was a bagman and fixer for several of the Five Families and a number of Harlem heroin bosses. Gallina was cooperating with the FBI and DEA in mob and narcotics investigations and claimed he had knowledge of the shooters in the Jimmy Hoffa hit and taped confessions locked away in a safety deposit box. One of the people in the mob Gallina was giving up information on was Hoffa suspect Salvatore (Sally Bugs) Briguglio of the Genovese crime family. Another was then Genovese capo and soon-to-be boss Vincent (The Chin) Gigante.

December 12, 1977 — Teamsters union figure Otto Wendell is found shot twice in the abdomen in his car on a rural slice of road three miles from his home in Livingston County, a rural community 40 miles west of the Motor City. He died at the hospital two weeks later. His .38 caliber revolver was found next to him in the vehicle. Wendell was a staunch Hoffa loyalist and held the position of Treasurer for Hoffa’s old Teamsters Local 299. Just like Hoffa, Wendell ran afoul with the mob and was scheduled to testify at the upcoming federal extortion trial of Detroit mafia captain, Vincent (Little Vince) Meli, who ran the area’s steel manufacturing and hauling business for the Tocco-Zerelli crime family. Wendell’s murder was ruled a suicide at first and then re-categorized as a homicide.

March 21, 1978 — New Jersey mob soldier Salvatore (Sally Bugs) Briguglio is gunned down leaving the Andrea Doria Social Club in Manhattan’s Little Italy section. A soldier in the Genovese crime family’s Jersey wing, Briguglio was Tony Provenzano’s right-hand man and alleged representative on the Hoffa hit team, according to FBI informants. At the time of his murder, Briguglio was considered a top suspect in Hoffa’s kidnapping and killing and was under indictment and awaiting trial with Tony Pro for the gangland slaying of Anthony (Three Finger Tony) Castellito in another union power struggle that occurred more than a decade before.

July 30, 1981 — Detroit mafia soldier Carlo Licata is found shot to death inside his residence in Bloomfield Township, Michigan on the six-year anniversary of Hoffa going missing. Many investigators theorize Hoffa was killed at Licata’s house at 630 West Long Lake Road, two and a half miles north of the Red Fox restaurant where Hoffa was last seen alive. Licata was the son of L.A. mafia don Nick Licata and the brother-in-law of Detroit mob boss Giacomo (Black Jack) Tocco. Licata’s death was officially ruled a suicide, despite the gun being discovered 10 feet away from him and absent of finger prints.

August 10, 1984 — Former Teamsters union figure Ralph Proctor is slain in the parking lot of a bank in Livonia, Michigan (shot twice from two separate guns behind the wheel of his idling black-colored Cadillac) while in the middle of a feud with Local 299 over a $100,000 loan he gave out and wasn’t being repaid on. Proctor, who headed the Steel Haulers Local 124 until April 1984, was a close friend and union ally of Hoffa’s and had been threatened in the days leading up to his murder by Hoffa homicide suspect and notorious Teamsters goon Rolland (Big Mac) McMaster. During the acrimony surrounding Hoffa in the mid-1970s, Proctor took a beating administered by McMaster’s personal enforcement unit in its intimidation campaign against Hoffa and his loyalists. FBI informants said Proctor was fighting with Detroit mafia capo Little Vince Meli in Proctor’s attempt to see a return on his loan. McMaster and Meli ate lunch together the day Hoffa vanished in 1975. Two current mob shot callers in Detroit are considered prime suspects in Proctor’s murder.