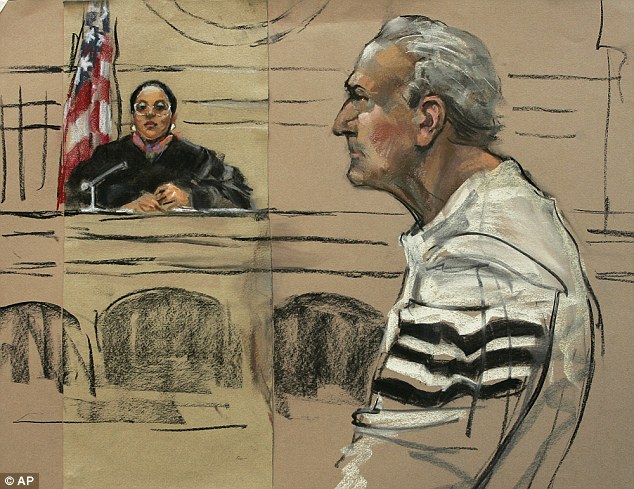 Following the death of legendary east coast mob don Raymond Patriarca, Sr. of a heart attack and the incarceration of his longtime underboss Jerry Angiulo within less than a year of each other in the early 1980s, the New England mafia was standing on shaky ground. By the end of the decade, the crime family was in a violent freefall that would last on-and-off until 1996. The syndicate with territory which spans Boston, Rhode Island and Connecticut split into two camps, one loyal to Francis (Cadillac Frank) Salemme, a former Patriarca regime hit man released from a 15-year prison stretch in 1987 for the attempted murder of an underworld attorney back in the 1960s, and the other to Joseph (J.R.) Russo, the Family’s East Boston capo and soon-to-be consigliere, and Russo’s ferocious second-in-command, Vincent (Vinnie the Animal) Ferrara, an Angiulo protégé from the North End with a business degree from Boston College.

Even after Russo and Ferrara were imprisoned in 1990, the bloody conflict raged on for more than another half decade. The Beantown mob war of the 1990s resulted in over a dozen gangland homicides. Russo died of cancer behind bars. The 67-year old Ferrara “went legit” after being released in 2005 and the appellate court tossed a prior murder conviction.

Cadillac Frank Salemme was back in the news last week, lifted out of the federal witness protection program and indicted for his alleged role in the 1993 slaying of nightclub impresario and New England mob associate Stevie DiSarro, whose remains were unearthed in March behind a converted mill in Providence and who was recently revealed in the indictment was a federal informant. Salemme, 82, has pled not guilty and is being held without bond. When he first flipped in 1999, he admitted to taking part of eight mob murders. Some however think he severely undershot the number of homicides he was involved in.

June 16, 1989 – Unpopular and easily-unhinged crime family underboss William (Billy the Wild Man) Grasso, based out of Hartford, Connecticut and Raymond Patriarca Sr.’s former cellmate in prison, is shot to death inside a moving van by a hit team made up Genovese crime family assassins on-call from Western Massachusetts, his body dumped in a nearby riverbed. Grasso was Patriarca’s son and direct successor, Ray, Jr.’s primary muscle and protection in his weak five-year tenure at the helm of the New England mafia. Staunch Patriarca loyalist Cadillac Frank Salemme survived an assassination attempt the same day in suburban Boston, getting shot in the stomach, foot and knee as he exited his black-colored BMW in the parking lot of an International House of Pancakes. The attacks were coordinated by the Russo-Ferrara faction in an unsuccessful play to eliminate the younger Patriarca’s top two lieutenants and main backing in one fell swoop.

*In the wake of Grasso’s murder and the shooting of Salemme, the Gambino crime family in New York ordered the violence to stop and for the two sides of the feud in the Patriarca Borgata to make peace. For a while, they do: Ray, Jr. abdicates the syndicate throne to Nicky Bianco, a mutually acceptable selection for both wings of the Family, Cadillac Frank becomes underboss and Russo is named consigliere. But when Bianco, Russo and Ferrara get locked up in a racketeering case and Salemme grabs control of the organization, tensions quickly boil over once again and relations between Cadillac Frank’s crew, spread out from Boston to Providence, and remnants of the Russo-Ferrara faction arising out of East Boston and the North End (Little Italy) sour fast. According to Massachusetts State Police informants, Salemme used the unrest to get even with those he deemed responsible for trying to kill him at the IHOP in the years prior.

August 16, 1991 – Russo and Ferrara loyalist and Fall River, Massachusetts bookie, Howard Ferrini, is beaten and stomped to death at his Berkley, Massachusetts home. Ferrini’s badly-battered corpse was found at Logan International Airport on August 21, stuffed into trunk of his midnight-blue colored Cadillac, his hands bound and a plastic bag placed over his head.

*Early on in his regime, Salemme sought to expand outside of the Greater Boston area into cities like Fall River, Framingham, Lowell and Milford. Ferrini, 53, was linked to Fall River crime lord Timothy (Timmy the Bat) Mello and Salemme enforcer Gordon O’Brien.

September 24, 1991 – Vinnie Ferrara’s driver and close friend Robert (Bobby D) Donati, a longtime low-level mover-and-shaker in the Beantown underworld and jack-of-all-trades mobster, is beaten and stabbed to death at his Revere, Massachusetts home, his body like that of Ferrini’s five weeks earlier, found in the trunk of his own Cadillac automobile, hogtied and heavily battered.

*Donati,50, died one of the top suspects in the still-unsolved Isabella Stewart Gardner Museum heist (the daring 1990 armed robbery of the prestigious private museum in Boston’s Fenway neighborhood yielding a cool half-billion dollars in precious artwork). He was a paid informant for the state police too.

October 3, 1991 – Russo and Ferrara loyalist Barry Lazzarini is beaten and shot to death inside his Manomet, Massachusetts home, left hogtied in a similar fashion to how Donati was. Lazzarini had formerly owned a restaurant that was a known hangout spot for gangster types in Boston

September 18, 1992 – Notorious Irish Patriarca crime family associate, enforcer and reputed hit man Kevin Hanrahan is killed after leaving a Providence, Rhode Island bar in Federal Hill (Little Italy) called The Arch, shot dead by two assailants on a street corner, waiting for what he had told people was his piece of a “big score.” Nobody has ever been arrested in the 39-year old Hanrahan’s murder and his homicide remains an open investigation with the Providence FBI today.

*Hanrahan worked for Cadillac Frank at the time he was slain, however was rumored to be freelancing, possibly drawing Salemme’s ire.

October 2, 1992 – Russo and Ferrara loyalist and North End restaurant owner Rocco Scali is shot in the back of the head as he sat in his car in the parking lot of a Dedham, Massachusetts International House of Pancakes.

December 8, 1992 – Russo and Ferrara loyalist Vinnie Arcieri is gunned down in the driveway of his Orient Heights, Massachusetts residence.

*Arcieri had allegedly gotten into a verbal altercation with Salemme’s East Boston capo Mark Rossetti at Arcieri’s restaurant in the weeks preceding his murder.

May 10, 1993 – Boston nightclub owner and New England mob associate Stevie DiSarro is strangled to death inside the Salemme family home in upscale Sharon, Massachusetts by Cadillac Frank’s son and protégé Frank Salemme, Jr., as Cadillac Frank and his brother and capo John (Action Jack) Salemme watched on, according to an FBI informant. DiSarro’s remains were finally unearthed back in the spring on property in Providence owned by an associate of Salemme’s Rhode Island capo Robert (Bobby the Cigar) DeLuca.

*The 43-year old DiSarro was partners with the Salemmes in a South Boston music venue-turned-strip joint called The Channel and was cooperating with the FBI and IRS in an investigation into Cadillac Frank’s affairs. Frank Salemme, Jr. died of AIDS-related cancer in 1995 at 37. DeLuca was arrested for perjury and obstruction of justice in connection with the DiSarro homicide in June. He entered the witness protection program five years ago and had been residing under a different identity in Florida,

*At his 1999 debriefing with the feds, Salemme lied and told investigators DiSarro was killed on orders of Nicky Bianco because of an unknown beef.

*Authorities believe that the pair was either murdered by protégé-turned-rival Timmy Mello over internal Fall River business or by the Salemme mob regime (possibly with the help of Mello) for failing to get in line with Cadillac Frank’s expansion efforts.

March 31, 1994 – Frank Salemme’s No. 1 strong arm and sometimes-bodyguard Richard (Richie the Hatchet) Devlin is shot to death behind the wheel of his car adorned in a bullet proof vest outside an East Boston restaurant. Another one of Cadillac Frank’s ace enforcers, Richard (Richie Nine Lives) Gillis, Devlin’s best friend, gets wounded in the attack staged by Russo-Ferrara loyalists on the outside being advised by Russo’s step brother Bobby Carrozza in prison.

*Coppola had dined with Kevin Hanrahan the night he was murdered and believed by some FBI agents who investigated the Hanrahan homicide as the hit’s “set-up man.”

*The Russo-Ferrara camp believed Souza was the triggerman in the Romano, Jr. slaying

Dec 11, 1994 – Salemme-faction drug dealer Paul Strazzula is killed in Revere, his body found in his car, which had been set ablaze.

*Cadillac Frank Salemme is federally indicted in January 1995. The bloodshed went on.

Nov 6, 1995 – Salemme-faction members Bobby Luisi, Sr., Roman Luisi (Bobby’s son), Antonio Sarro & Anthony Pelosi are gunned down in a Charlestown bar and grill in what came to be known in the Boston media as the 99 Restaurant & Pub Massacre.

April 3, 1996 – Veteran Patriarca Family thug Richard (Vinnie the Pig) DeVincent is shot to death in Medford, Massachusetts after reportedly beefing with Salemme and his brother over street tax

*Vinnie the Pig had once been one of Jerry Angiulo’s loan sharks, bookies and go-to collectors. He came out of prison in the 1990s and allegedly bumped heads with the Salemmes

November 24, 1996 – Russo-Ferrara faction enforcer Robert (Bobby the Beast) Nogueira is shot to death in the parking lot of a Saugus hotel, riddled with more than 20 bullets in a late-night attack

*Nogueira was Russo-Ferrara faction younger generation leader Vincent (Gigi) Marino’s bodyguard and main muscle. The same night and within minutes of Bobby the Beast being killed, Marino himself survives an assassination attempt in front of a Revere nightclub

*Cadillac Frank Salemme enters the witness protection program in 1999. When he was collared last week on the DiSarro case, he had been living in Atlanta, Georgia. Salemme pled guilty to perjury and obstruction of justice charges related to the DiSarro homicide investigation in 2008.