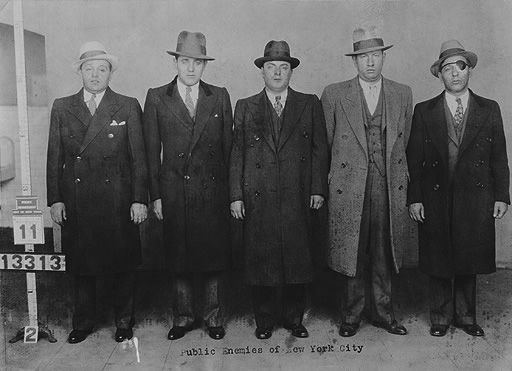 Serving as the official hit squad for the early-era Italian mafia in New York City during the 1930s, Murder, Incorporated was made up of mainly Jewish gangsters and could morbidly boast a body count reaching well into the triple figures in a little over a decade of gangland prominence. With affairs in the mob enforcement wing overseen by the diminutive, but historically-lethal Louis (Lepke) Buchalter and reporting directly to “The Commission” of the notorious Five Families and legendary Jewish crime lord Meyer Lansky, the trigger-happy unit of eager thugs and sociopathic sycophants wreaked havoc on the east coast and eventually each other, cementing a legacy of viciousness and volatility unrivaled in American underworld circles.

*Waxey Gordon’s bodyguards are both killed in an attempt on Gordon’s life.

*Iconic Jewish crime lord Schultz, his top advisors Berman and Landau and his bodyguard are gunned down at The Palace Chop House in New Jersey

November 12, 1941 – Famous Murder, Inc. turncoat Abe (Kid Twist) Reles dies suspiciously when he either falls or is thrown out of a window in his police-guarded hotel room

*Bugsy Siegel’s partner in a drug racket is killed in Tijuana, Mexico

*The historic Jewish mob figure is murdered in Beverly Hills, California after angering his partners in the mob with dealings in getting the Las Vegas hotel and casino industry off the ground and his girlfriend’s sticky fingers

*One of Murder, Inc.’s most accomplished assassins and top narcotics peddlers

*Murder, Inc. hit man and the last body to drop of the group’s core members