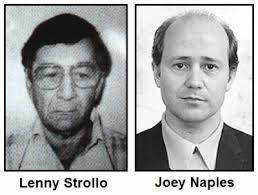 1 John Bazzano – The third Pittsburgh mafia don in a row to be assassinated, Bazzano was killed on August 6, 1932 by the newly-formed LCN National Commission for ordering the unsanctioned triple-execution of the power-hungry Volpe Brothers.  A week after arranging for the Volpes to be murdered at his coffee shop headquarters in a purported peace conference-turned ambush, Bazzano was lured to New York and attended a lavish party in Manhattan in his honor, a ploy to get him to let his guard down, prior to disappearing on the way back to his hotel in the early morning hours following the festivities. His son, John, Jr., would go on to become a Pittsburgh mob boss as well.

2 Giuseppe (Joe the Baron) Siragusa – Bazzano’s predecessor, Siragusa was on the wrong side of the East Coast gangland war in the early 1930s that led to the forming of the modern-day American mafia and killed for his allegiance to slain New York don Salvatore (Little Caesar) Maranzano on September 13, 1931 inside the basement of his Squirrel Hill mansion. The 50-year old Godfather reigned for two years and made his fortune in providing the yeast necessary for bootlegged liquor during Prohibition.

3 Joseph (Little Joey) Naples – The Pittsburgh mob’s capo in Youngstown, Ohio, a hotbed of organized crime activity and cash-cow of a region for the Pennsylvania-based organization for years, Naples was gunned down by a sniper’s hunter’s rifle while visiting the construction site of a home he was building on August 19, 1991. Little Joey, the protégé of popular Pittsburgh mafia chief Vincent (Briar Hill Jimmy) Prato, butted heads with an ambitious underling of his named Lenny Strollo, who leveraged Naples’ beef with the Gambino Crime Family out of New York and got permission to clip him.

4 Charles (Charlie the Crab) Carabbia – One of three high-profile brothers that oversaw the Youngstown rackets on behalf of the Cleveland mafia – the Ohio mob and the Pittsburgh LCN faction “shared” the working class town’s underworld – Charlie the Crab’s antagonistic and erratic behavior led to his disappearance and murder on December 13, 1980. Jimmy Prato ordered the hit, with approval from Carabbia’s superiors in Cleveland, specifically boss James (Jack White) Licavoli and underboss Angelo (Big Ange) Lonardo. Called to a meeting at a Youngstown donut shop by Lenny Strollo, The Crab was never heard from again.

5 Ernest (Big Ernie) Biondillo – A strong-minded and business-savvy “button man” in the Pittsburgh mafia’s Youngstown rackets, Biondillo, who came up under Little Joey Naples and Briar Hill Jimmy Prato, feuded with Lenny Strollo, Naples’ replacement as the syndicate’s Youngstown captain, and was shot to death while driving to work on the morning of June 3, 1996. Biondillo had eyes on Strollo’s capo’s seat and was going around town making political and judicial payoffs and racket collections behind Strollo’s back. The hit was carried out by black gangster Jeff Riddle, a Strollo strong arm that wished to become the first African-American LCN inductee.