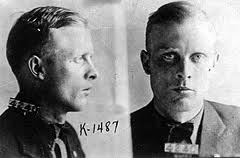 1 John (Brother Johnny) Lazia – Kansas City’s late Prohibition Era mafia chief and first LCN don, Lazia was killed in the early-morning hours of July 10, 1934 by machine-gun wielding assailants as he exited a vehicle driven by his underboss and best friend Charles (Charlie the Wop) Carrollo outside his house after a night on the town. Lazia was K.C’s first gangster celebrity and was a mainstay in the city’s newspaper headlines and trendy nightclubs. Later in his life, Brother Johnny feuded with a former lieutenant of his named, Michael (Jimmy Needles) La Capra, who went to the area’s giant political machine for support in overthrowing Lazia. As he lay dying in Kansas City’s St. Joseph’s Hospital, Lazia is alleged to have told an attending physician, “Doc, what I can’t understand is why anybody would want to do this to me, Johnny Lazia, someone who’s been a friend to everybody?” Some speculated that Carrollo sold-out Lazia to La Capra, the suspected gunmen, so he could eventually assume power, which he did (arranging for La Capra’s banishment from KC and subsequent slaying) .

2 Charles Binaggio – Ruling over the area’s rackets as Kansas City’s mafia boss for the entire decade of the 1940s, Binaggio and his underboss and top enforcer, Charles (Mad Dog) Gargotta were gunned down on the evening of April 5, 1950 at the First Ward Democratic Club, after Binaggio fell out of favor with the LCN National Commission in New York City for his greediness and unwillingness to take orders. The double homicide was never solved, but Binaggio’s successor and close friend, Anthony (Fat Tony) Gizzo, was suspected of taking the contract from the New York dons and coordinating the hits.

3 (tie) David Bonadonna – A “made” member of longtime Kansas City Godfather Nick Civella’s crime family, Bonadonna was the most high-profile victim of a nasty mob war fought in the mid-1970s for control of the city’s River Quay entertainment district. His body was discovered in the trunk of his car on K.C. street corner on July 22, 1976. Bonadonna and his son, Freddie, held interests in a number of businesses in the area that Civella-sent henchman William (Willie the Rat) Cammissano, himself a future don, was trying to tax and then take over all together. Freddie Bonandonna fingered Cammissano as his father’s murderer at Willie the Rat’s 1978 federal extortion trial and entered the Witness Protection Program, where he would go on to commit suicide years later. Cammissano was Civella’s primary enforcer and a suspected triggerman in 11 different Missouri gangland homicides, before becoming the city’s mob boss in 1983 until his death of lung cancer in 1995.

3 (tie) The “Rat Pack Murders” – Upon taking power as Godfather of the Kansas City underworld in the spring of 1983, Willie the Rat Cammisano unleasheded a blood-soaked vendetta against enemies new and old, ordering three significant gangland hits in his first year and a half on the throne to forcefully cement his control over the syndicate. On January 6, 1984 longtime rival Carl Spero, already paralyzed from a previous murder attempt in the 1970s at the end of the River Quay conflict, was blown to bit by a nail bomb at his used car lot. A little over a month later on February 9, charismatic K.C. mobster Anthony (Tiger) Cardarella, a staple in the Missouri music scene as a concert promoter and retail record-store owner, was kidnapped and strangled to death after Cammisano felt he posed a threat to his leadership. Cardarella’s close friend and fellow mafia lieutenant Felix (Little Phil) Ferina, someone who might have lured him to his execution and he had partnered on a slew of rackets and alleged mob hits in their time on the street together dating back to the 1950s and 60s, was shot to death on September 19, 1984.

4 Carlo Carramusa – Born in Chicago, Carramusa was a Kansas City mafia drug lieutenant that turned government informant and testified at trial against several fellow mob narcotics conspirators, prior to being whacked on June 6, 1945. Booted from Missouri, Carramusa had moved back to the Windy City and literally had his head blown off by a sawed-off shot gun-holding assassin in front of his teenage daughter as they entered their house.

5 Michael (Jimmy Needles) LaCapra – The heroin-addicted hit man and alleged killer of Lazia in an unsuccessful power-grab less than a year earlier, La Capra was murdered on August 18, 1935, while in hiding in New York. Lured to his death with the promise of drugs, Jimmy Needles, at one time Kansas City’s No. 1 opium and ‘H’ importer and wholesaler, was found at an upstate farm, shot twice in the back of the head.