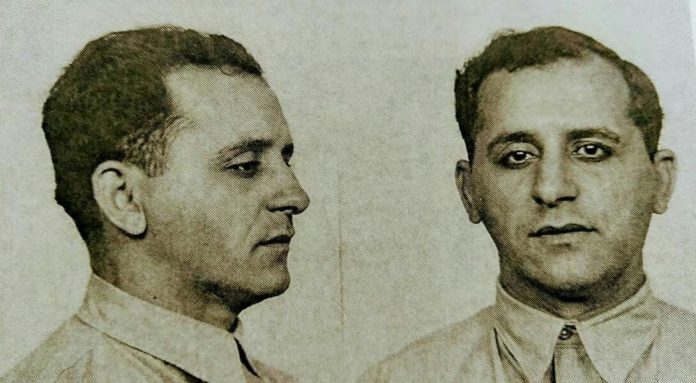 April 28, 2022 — The final resting place of Chicago mafia boss Sam (Momo) Giancana was broken into this week in a suspected attempt by collectors to raid the former’s don’s tomb for riches, according to Giancana’s close relatives. Giancana, who was slain in 1975, is buried in his family’s mausoleum at Mt. Carmel Cemetery in Hillside, Illinois, besides his wife, Angeline. A number of previously-unknown urns in the crypt were disturbed in the break-in.

Mt. Carmel Cemetery is the site of tombs and mausoleums belonging to many past titans of the Chicago mob, including Al Capone himself and Capone’s successor as boss of the Outfit, Frank (The Enforcer) Nitti. Giancana worked for Capone in the Prohibition Era.

At the height of his power in the late 1950s and 1960s, Giancana was the face of organized crime in America, romancing Hollywood starlets and singers and socializing with Frank Sinatra’s Rat Pack and future U.S. President John F. Kennedy. After a short prison sentence for contempt, he fled the country and lived in Mexico for the better part of the next decade, making tens of millions of dollars in casino investments in the Caribbean, Europe and Middle East. He returned to Chicago in 1974, having angered mob shot callers in the Outfit by not sharing in his casino proceeds during his time in exile.

On the evening of June 19, 1975, Giancana was shot to death inside his Oak Park, Illinois residence while cooking a late-night meal of sausage and peppers. He was days away from testifying before a U.S. Senate committee investigating ties between the mafia and the CIA.