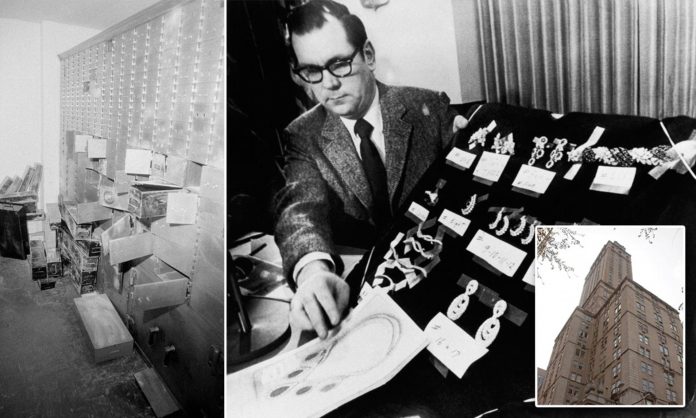 June 11, 2022 — New York mob thief Sorecho (Sammy the Arab) Nalo pulled off the biggest hotel robbery in world history and then his hoarding of the profits from the headline-grabbing heist might have gotten him killed years later. Nalo was shot to death inside his travel agency on October 25, 1988 after feuding with Lucchese crime family leaders over gambling turf in Queens and bad blood from the 1970s and The Pierre burglary bubbled to the surface, per sources.

Raised in Detroit with an Iraqi heritage, Sammy the Arab landed in New York in the early 1960s and linked up with the Lucchese crime family. He ran a legendary high-end burglary crew out of the back room of his Manhattan nightclub, the Port Said; a glitzy Middle-Eastern themed 26th Street party spot populated by gangsters, athletes and celebrities. According to FBI and DEA documents, Nalo also held sizable interests in the wholesale narcotics trafficking trade as well as various gambling, loan sharking and prostitution rackets.

Sammy the Arab’s partner in his infamous robbery scores was Rochester mobster Bobby Comfort. Nalo and Comfort met in prison and had teamed together to previously boost cash and expensive jewelry from posh Manhattan hotels like The Carlyle, The Regency, The St. Regis, The Drake and The Sherry Netherland, where they looted $1,000,000 from actress Sophia Loren’s suite. Nalo kicked up tribute to the Lucchese clan and its consigliere Christopher (Christie Tick) Furnari, while Comfort gave his tribute for protection to the Valenti crime family in Western New York. Furnari headquartered out of Brooklyn.

Around Christmas 1971, Nalo and Comfort set their sights on The Pierre and the vault filled with its exclusive clientele’s safety-deposit boxes for cash and valuables brought for or accrued during their respective vacations. Nalo got Christie Tick to provide him a hold-up team of 8 gunmen and chose the early morning hours of January 2, 1972 as the time of the daring hotel job. Comfort made reservations for a room at The Pierre, allowing the robbery crew access to the property at around 3:40

The hotel staff was immediately taken hostage, rounded up by the registration desk and bound and gagged. Nalo, Comfort and Furnari’s eight soldiers were inside the hotel for three hours, ransacking the vault and making their way into over 50 specifically-selected safety-deposits boxes — the boxes owned by the hotel’s richest patrons. The haul came in, depending who you ask, anywhere between 3 million and 30 million dollars worth of cash, security bonds and precious jewels. Comfort tipped each of the hostages with a $20 bill as the brigade of stick-up men exited the building shortly before 6:45 a.m.

Per court records, Nalo got into an argument with Christie Tick regarding percentages of the loot stolen and pocketed most of the Lucchese family’s take of the score, hiding a substantial chunk of it with mob figures in Detroit that he trusted. One of those mob figures, gave Nalo up and turned over $750,000 in jewelry to the FBI. Nalo and Comfort were both convicted of taking part in the robbery and were sentenced to four-year prison terms apiece.

Comfort died of cancer in 1986. Two years later in 1988, Nalo butted heads with the Luccheses again. This time, over gambling dens operating in Astoria, Queens. According to sources and FBI informant files, Lucchese boss Vittorio (Little Vic) Amuso green-lit Nalo’s slaying and gave the contract to Lucchese capo Peter (Fat Pete) Chiodo. Some claim the residual acrimony from Nalo’s stiffing of the Lucchese’s in The Pierre Hotel heist caused the murder contract to be okayed and carried out.

Spryedon (Spiro the Greek) Velentzas, the Greek Godfather of Queens, was tasked with setting up Nalo for the kill. Velentzas was on the phone with Nalo was he was gunned down by two mob hit men dispatched by Chiodo, who would go on to become a star witness for the government.

Amuso and Velentzas are both 87 years old and serving life sentences in prison. Christie Tick was busted in the big “Commission Case” in the 1980s and died a free man in 2018 at 94. Amuso still holds the reins of the Lucchese family today and was mentored for the boss’ seat by Christie Tick from their Dyker Heights, Brooklyn encampment.