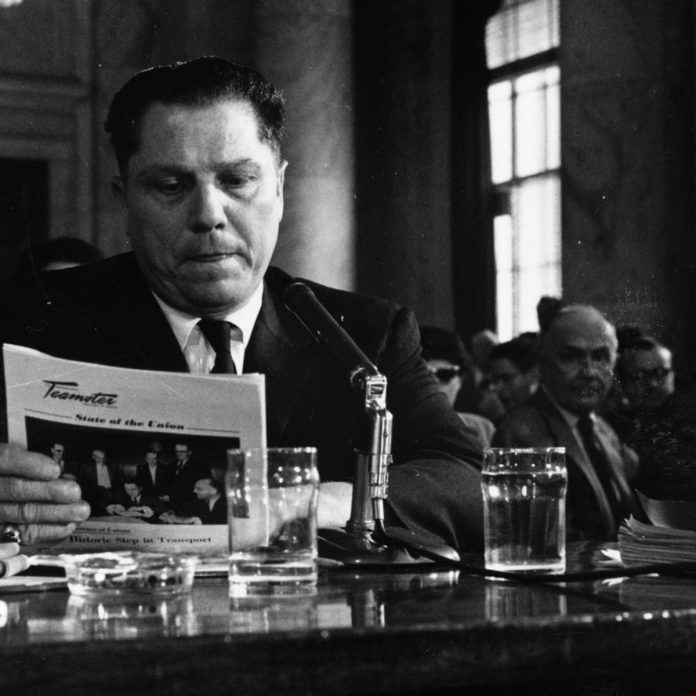 July 23, 2022 — With the recent FBI dig in New Jersey failing to hit paydirt despite seemingly solid evidence pointing to Teamsters boss Jimmy Hoffa’s remains lying beneath the Pulaski Skyway, the Detroit mafia is laughing. Some of that laughter is coming from the grave.

“Tony and Billy Jack are lying there with giant grins on their faces, they fooled everyone. It’s a half-century later and the joke is on everyone still running around looking for something that doesn’t even exist,” said one retired Detroit wiseguy.

Hoffa was feuding with the mob and disappeared on the afternoon of July 30, 1975 on his way to a purported sitdown with two high-ranking organized crime figures at a swanky restaurant in Bloomfield Hills, Michigan. Detroit mob street bosses Anthony (Tony Jack) Giacalone and Vito (Billy Jack) Giacalone both died free men and the two top suspects in the infamous Hoffa kidnapping and murder.

According to FBI documents and first-hand sources, Tony Giacalone was tasked by the American mafia’s Commission in New York to coordinate the details of Hoffa’s slaying. Giacalone was related to Provenzano via marriage and Provenzano was in a bitter personal dispute with Hoffa at the time of Hoffa’s kidnapping and murder.

“Part of the brilliance in pulling off the perfect murder (the Hoffa hit) was the Giacalone brothers intentionally telling 100 people 100 different things,” the former Motor City Goodfella said. “People who would have been in position to know, were fed false information. Those people inevitably told other people they trusted who told other people in this world of ours and before you know it a bunch of what look like credible theories start filtering out and filling the air with what amounts to be 99 percent disinformation. This is how we got to where we are right now. Dead end after dead end. I swear, Tony and Billy just slapped a high five in the cemetery.”

Last month, the FBI didn’t uncover any signs of Hoffa’s body in a search of what used to be the mobbed-up PJP Landfill in Jersey City, New Jersey. The FBI’s 48-hour excavation of the land which is now a state park and nature preserve took place back in June under a veil of secrecy. U.S. Attorneys and federal law enforcement out of Detroit and New Jersey secured a search warrant for the property last October based on tips coming from sons of the landfill’s former owners generated by a prominent investigative reporter and the most watched cable news network in the world.

Hoffa’s murder is arguably the most notorious unsolved crime in our nation’s history. His remains have never been found and nobody has ever been arrested in the case that remains an active and open FBI investigation to this day.

“You can be looking for this guy until the end of universe and you’re not finding anything,” the ex-wiseguy said. “Why would they (the mob) keep a body intact, especially, Hoffa’s, when you have multiple ways to incinerate or cremate him and then you can legitimately say no body, no crime.”

The Detroit mob’s Tocco-Zerilli crime family owned at least four businesses in Southeast Michigan with in-house incinerators and crematoriums, per Michigan State Police intelligence files. One of those businesses, Central Sanitation (co-owned by three Detroit mafia captains), burned down in a suspected arson fire before the FBI could get a search warrant. Two of the owners of Central Sanitation were followed to New York in the days after Hoffa disappeared by an FBI surveillance squad and seen meeting with members of the Commission in a series of ga

At the time Hoffa vanished, PJP Landfill was owned by Provenzano crew lieutenant Phil (Brother) Moscato and a mob associate and gambler named Paul Cappola. Provenzano was long-rumored to have used his access to Moscato and Cappola’s trash dump to dispose of bodies and victims of his brutal reign. Moscato was one of the biggest loan sharks on the East Coast and lorded over a vast juice-loan racket empire in Hudson County, New Jersey for decades.

Provenzano and Moscato were members of the Genovese crime family’s Garden State regime. The Genovese organization is based out of New York and is traditionally the most powerful of the Five Families. The Commission used to be comprised of all the leaders of the Five Families, with seats eventually added for other cities, including Detroit. Hoffa parlayed his ties in the Detroit mafia into the Teamsters top spot in the 1950s.

Before dying of cancer in 2014, Moscato told esteemed investigative reporter and author Dan Moldea that he was responsible for burying Hoffa’s body, which was transported in a moving truck from Metro Detroit to his trash dump in Jersey City and given over to Cappola to be placed in the ground. Sons of both Moscato and Cappola confirmed this theory and along with Moldea and Fox News, brought the theory and suspected burial spots to the authorities. The theory is based on the belief that Tony Pro wanted possession of Hoffa’s body for a trophy and as a potential bargaining chip with prosecutors.

“Moscato wasn’t lying, he thought what he was telling to Moldea was true……the thing was, Brother Moscato was lied to. Tony Pro was lied to. Nobody outside a select number of highly-trusted Detroit (mob) guys knows what actually happened. And those guys are all dead. Nobody in New Jersey was calling shots. I don’t care what Tony Pro might have wanted to do with the body, Tony Jack wasn’t going to let it leave Detroit. Tony Pro might have gotten a body shipped down to him in Jersey or what he thought was a body, it wasn’t Jimmy Hoffa though. Hoffa’s body was incinerated. There is no body.”

Moldea thinks it’s possible the FBI didn’t dig in the right spot. He points to his own GPR evidence claiming there is still reason to believe that Hoffa’s remains reside on the former PJP Landfill site.

The FBI originally searched the PJP Landfill property in the fall of 1975 on a tip from Provenzano’s driver, Ralph (Little Ralphie) Piccardo. Provenzano. Digs and searches around the country have dominated media headlines for the last 47 years. Experts speculate the U.S. government has spent tens of millions of dollars on the investigation to uncover no concrete results. Just conjecture and wild theories.

Per sources and thousands of pages of federal documents, Hoffa was murdered by his one-time allies in the mafia after a falling out regarding his desire to reclaim the Teamsters union presidency following a five-year prison stint. Investigators theorize Billy Giacalone served as his older brother’s “boots on the ground” in the conspiracy and captain of the hit squad dispatched to do away with Hoffa.

The Giacalone brothers acted as Hoffa’s go-between with the mob for years leading up to his killing — they were suspected of ordering or taking part personally in carrying out dozens of gangland slayings but neither were ever charged in any homicide cases. It was the Giacalones who brokered the “sitdown” Hoffa went missing from. Billy Giacalone was unaccounted for by both his FBI and Michigan State Police surveillance units in the hours around Hoffa’s disappearance.

Tony Giacalone died of kidney failure in 2001 under indictment in a racketeering case. Billy Giacalone died in 2012 after a battle with dementia in his final years. Provenzano dropped dead of a heart attack in prison in 1988 serving a life sentence for an unrelated labor union-connected mob homicide.

“The very notion that New Jersey, New York, Chicago, Pennsylvania, Delaware or wherever had to come into Detroit and help the Giacalones or direct the Giacalones on how to handle this job (Hoffa’s murder) is outright offensive to anyone who knows the reality of this entire situation or ever interacted with Tony or Billy,” the one-time Detroit mob figure concludes. “Yeah, like these two individuals weren’t the best at doing this specific thing? Right? Like they had to take orders from Tony Pro or anyone from that part of this thing, Let me be the first to tell you, they didn’t. So, whether Tony Pro wanted to brag about having Hoffa’s head on the wall or not, at the end of the day, he was blowing smoke, either because he was embarrassed by not being more influential in this job or because he didn’t know any better and was just a sucker. Tony Jack ran circles around Tony Pro. Don’t believe what you see in the movies or on Netflix.”