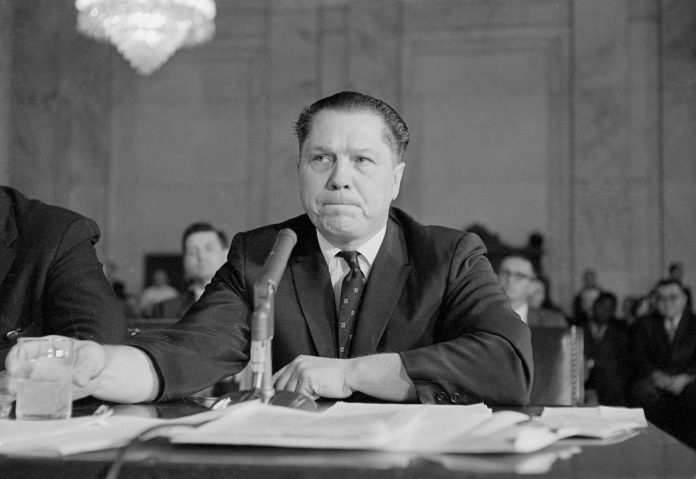 July 22, 2022 — The FBI once again came up empty in a dig for long-missing Teamsters union boss Jimmy Hoffa. Federal agents failed to find any human remains at the former site of the PJP Landfill in Jersey City, New Jersey directly underneath the Pulaski Skyway in a 48-hour excavation project that took place under a veil of secrecy back in June. U.S. Attorneys out of Detroit and New Jersey secured a search warrant for the property late last year based on tips coming from sons of the landfill’s former owners.

The 62-year old Hoffa disappeared on the afternoon of July 30, 1975 on his way to a lunch meeting with Detroit mob street boss Anthony (Tony Jack) Giacalone and New Jersey mafia capo Anthony (Tony Pro) Provenzano, scheduled for 2:00 p.m. at the Machus Red Fox in Bloomfield Hills, Michigan and was never seen again. Hoffa’s murder is the most notorious unsolved crime in American history. His remains have never been found and nobody has ever been arrested in the case that remains an open FBI investigation to this day.

The PJP dig is the latest in a series of high-profile FBI and state police searches that have combined to capture the collective imagination of the world over the years, placing the crime and its alleged participants in pop-culture lore forever. PJP Landfill was owned by Provenzano crew lieutenant Phil (Brother) Moscato, one of the biggest loan sharks on the East Coast at the time, and mob associate Paul Cappola. Provenzano and Moscato were members of the Genovese crime family’s Jersey regime. The Genovese has traditionally been the most powerful of New York’s Five Families.

Before dying in 2014, Moscato told esteemed investigative reporter and author Dan Moldea that he was responsible for burying Hoffa’s body, which was transported in a moving truck from Metro Detroit to his trash dump in Jersey City and given over to Cappola to be placed in the ground. Sons of both Moscato and Cappola confirmed this theory and along with Moldea and Fox News, brought the theory and suspected burial spots to authorities. Paul Cappola is dece

The FBI originally searched the PJP Landfill property in the fall of 1975 on a tip from Provenzano’s driver, Ralph (Little Ralph) Piccardo. Today, the property is a state park and nature preserve. Hoffa was pronounced dead in 1982 on the seventh anniversary of his disappearance.

Per sources and thousands of pages of federal documents, Hoffa was murdered by his one-time allies in the mafia after a falling out regarding his desire to reclaim the Teamsters union presidency following a prison stint for bribery, jury tampering and fraud where he was forced to relinquish the position in order to get a sentence commutation from the Nixon White House in late 1971. Prior to his incarceration, Hoffa had been a rising star, leading the Teamsters to meteoric heights of power and influence while being propped up by the mafia in his hometown of Detroit.

Hoffa and Tony Provenzano were once close friends turned bitter rivals and Hoffa needed Provenzano’s support in order to take back his president’s post. Tony Giacalone was Hoffa’s go-between with the mob figures he was beholden to for his boss’ seat. It was Giacalone who brokered the “sitdown” Hoffa disappeared en route to. Provenzano and Giacalone were related by marriage.

Giacalone died of kidney failure in 2001 under indictment in a racketeering case. Provenzano passed away in prison in 1988 serving a life sentence for an unrelated labor union-connected mob homicide.