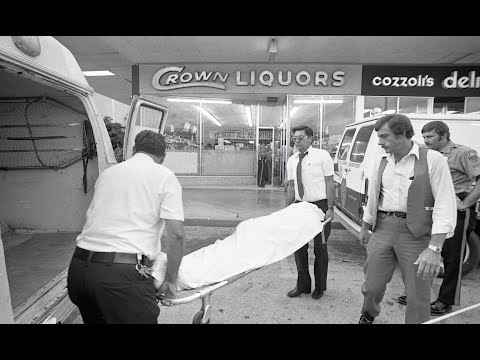 As cocaine exploded onto the scene in America in the late 1970s and early 1980s, Miami, Florida blossomed into the epicenter of the U.S. drug market. The rapidly expanding consumer base throughout the country birthed the so-called Cocaine Cowboy era of rampant narcotics trafficking and reckless violence with various sophisticated and trigger-happy criminal organizations jockeying for position in the newly-created underworld business mecca and gangster playground of South Florida. Much of the debauchery and destruction was chronicled in the acclaimed 2006 documentary Cocaine Cowboys.

THE COCAINE COWBOY WARS MURDER TIMELINE (1978-1989 – The Highlights – Or Lowlights If You Will -, Of South Florida’s Down & Dirty Drug Era):

April 23, 1978 – South Florida gangland figure Jamie Suescun is killed for engineering a burglary of a rival drug dealer’s house the week prior and strangulation of his maid (four others die in an ensuing shootout as the hit team goes to dump Suescun’s hogtied body, including Ruben Echeverria, Julio Gaona, Jorge Luis de Campo and Osear Penagos Rios). Suescun robbed the feared Panesso family of cash and kilos of cocaine on April 17. He worked for Miami drug kingpin Carlos Panello Ramirez.

July 11, 1979 – The Dadeland Mall Massacre – Drug kingpin German Jimenez Panesso & his bodyguard and driver Juan Hernandez are killed in mall’s Crown Liquor Store in the fallout from the Suescun incident. Panesso blamed Ramirez for him being robbed. The beef was mediated by The Godmother,” Colombian narco czar Griselda Blanco, who was in debt to Panesso and sided with Ramirez. It was Blanco’s hit squad that carried out the Dadeland Mall slayings.

September 18, 1979 – Armando Gonzales, Angel Acosta & Raemundo Martinez are killed in a house in West Miami after getting into a beef with Cuban drug boss Rafeal Rodriguez.

May 7, 1980 – Drug dealer Carlos Murcia Fajardo is gunned down in front of Miami International Airport by a man on a motorbike.

July 14,1980 – Drug runner-turned-ATF informant Larry Nash is butchered to death with a chainsaw in a South Florida motel on orders of local narco boss Orlando Cicillias, inspiring the iconic chainsaw scene in the 1983 film Scarface.

Summer 1981 – Drug kingpin Octavio (The Mattress) Mejia is murdered inside the Pan American Mall in South Florida after his son Luis (Papo) Mejia starts an offshoot drug network in New York against Griselda Blanco’s wishes and she has his entire 11-member crew killed.

February 6, 1982 – Cocaine Cowboy Jesus (Chucho) Castro’s 2-year old son Johnny is accidentally killed in attempt on his own life in a drive-by shooting.

May 26, 1982 – Drug-dealing married couple Alfredo & Griselda Lorenzo are murdered in their home on orders of Griselda Blanco over a drug debt.

July 24, 1982 – Miami drug world lieutenant Domingo Hernandez is slain for failing to foot the bill for a lavish party thrown for a visiting narco don from South America.

August 17, 1982 – Female drug lord Leonela Arias, a one-time partner of Griselda Blanco, is machine-gunned to death in Colombia behind the wheel of her car on her way to the funeral of a mutual friend.

September 15, 1982 – Aspiring drug lord Luis (Papo) Meija is stabbed by Blanco hitmen 10 times with a bayonet as he leaves the Miami International Airport, but miraculously survives.

October 18, 1982 – Griselda Blanco’s brother-in-law Diego Sepulveda is found shot to death in a motel in Lauderdale-by-the-Sea,

*Florida 1983 – Griselda’s third husband Dario Sepulveda is killed in Colombia the following year after a feud over his romantic dalliances with other women leads him to flee the U.S. with Griselda’s youngest son. Blanco had her first and second husbands murdered, too (Albert Bravos was shot to death and Carlos Trujillo was poisoned to death).

March 18, 1983 – Miami drug dealer Rodriguez Seferino is fished out of Biscayne Bay, bound, gagged, shot in the back the head.

February 2, 1984 – Marta Ochoa, of the notorious Ochoa drug network in Colombia, is tortured and killed when her business relationship with Griselda Blanco goes south over a 1.8 million dollar debt Blanco owes her.

July 6, 1984 – Drug chief Rodrigo Arturo Atehortua is found slain in hiding in California on orders of Griselda Blanco over a debt and refusal to give up the whereabouts of another enemy of hers in hiding.

July 7, 1984 – John Garcia, Atehortua’s 16-year old nephew is killed, to eliminate the only eye-witness to the Atehortua hit the day before.

December 1, 1984 – There are seven drug-related killings in one night in a single Miami neighborhood.

February 19, 1986 – Barry Seal. a major U.S. based operative for the Colombian Medellin cartel, master drug smuggler, money launderer and double-agent working for the DEA, is killed by assassins in Louisiana as he does court-ordered community service at a Baton Rouge Salvation Army facility.

February 3, 1987 – Powerboating icon, racer and designer Don Aronow is assassinated in Miami, gunned down behind the wheel of his car as he left a meeting at his 188th Street office on orders of a spurned business associate. The speedboat race circuit was a “whose who” of the drug smuggling trade in South Florida in the 1980s.

February 17, 1987 – Oscar Piedrahita, the former export lieutenant for Griselda Blanco’s organization, is executed while in hiding after extorting Griselda for one million bucks in a kidnapping of her son. Piedrahita is machine gunned to death at his infant son’s wake.