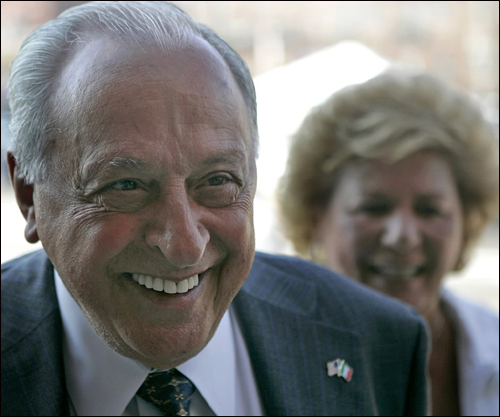 Maybe he wasn’t so crazy after all. New England mafia don Peter (The Crazy Horse) Limone died early this week of cancer at 83, having successfully avoided going back to prison after being sprung nearly two decades ago following serving over 30 years on a wrongful murder conviction and allegedly jumping back into Patriarca crime family affairs with both feet. Hailing from the crime family’s Boston faction, Limone reportedly was named consigliere of the Patriarca clan in 2002 and bumped up to the boss’ chair in 2009.

According to exclusive Gangster Report sources, the younger generation in the New England mafia called Limone, “The Crazy Horse” due to the fact that some people thought he was nuts for returning to the fold in the mob in the wake of receiving 26 million bucks by way of a civil lawsuit filed against the government for wrongful imprisonment. In the end, Limone got the last laugh. Expect for a brief brush with the law in the 2000s, he stayed out of trouble…..and out of handcuffs and the clink.

Born and raised on Boston’s Westside, the Crazy Horse became a fast-riser in the area’s underworld at a young age in the late 1950s and early 1960s, being groomed by the crime family’s then underboss Enrico (Henry the Referee) Tameleo. In 1968, Limone, Tameleo and two others were found guilty of the 1965 gangland slaying of Boston Irish mobster Teddy Deegan based on the testimony of infamous Patriarca syndicate enforcer and informant Joe (The Animal) Barboza, who as it later turned out was lying for personal reasons.

Tameleo died behind bars in 1985, 16 years before two of his co-defendants were exonerated and walked free in 2001. Barboza was murdered living under an assumed identity in San Francisco, California in 1976. Per informants, the man driving the getaway car in the Barboza hit was Limone’s one-time acting boss Anthony (Spucky) Spagnolo, slated for release from prison on a federal extortion conviction later this year.

Limone pled no contest to racketeering charges in state court in July 2010 and received a light sentence of five years of probation. He resided in the Boston suburb of Medford, Massachusetts for most of his adult life and is the third New England mob figure to die of natural causes in the last several months – Patriarca soldier Ralph (Ralphie Chong) Lamattina and Patriarca captain Anthony (The Saint) St. Laurent each passed recently. Lamattina spawned from the Family’s Boston wing, dying in the spring. St. Laurent ran a crew in Providence, Rhode Island and controlled gambling activity in parts of southern Massachusetts prior to losing a long battle with failing health last fall.

Mobologists on the east coast expect Carmen (The Big Cheese) DiNunzio, Limone’s acting boss and protégé, to be immediately promoted to full-fledged Godfather status. DiNunzio, 58, had been the Patriarca’s underboss from 2004 until his own racketeering bust in 2008 and subsequent six-and-a-half years of incarceration. Based out of the Gemini Social Club in Boston’s North End, the Big Cheese was sprung from the can in 2015 and will officially be off parole in July.