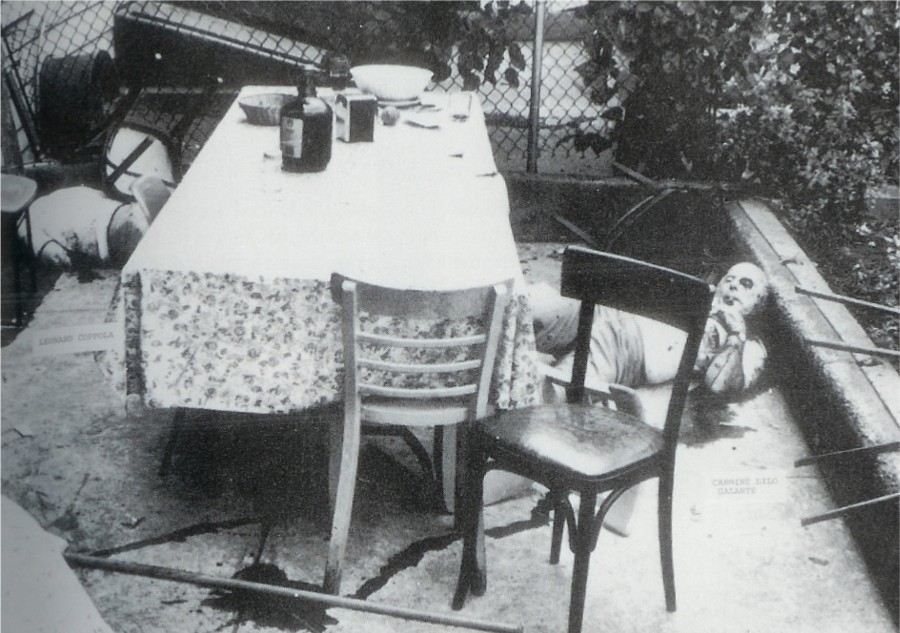 When Bonanno crime family don Carmine “The Cigar” Galante declared himself the so-called “capo di tutti i capis,” or “boss of bosses” of the New York underworld, the mafia’s ruling body declared him a dead man walking.

On the sweltering-hot afternoon of July 12, 1979, the 69-year old Galante and two of his men were killed in a hail of bullets on the patio of Joe & Mary’s Italian-American Restaurant in Brooklyn. It was a gangland assassination for the ages that sent the Bonanno clan careening off the rails for the next several years.

Photos of the gruesome triple mob murder, featuring a slain Galante, with his trademark stogie clenched between his teeth, splashed across newspaper front pages around the globe. The image of a bloodied, lifeless Galante sprawled on the ground of the restaurant’s patio went on to become iconic, capturing the sheer brutality of the American mafia.

Galante was born and raised in East Harlem and became a protégé of both Vito Genovese and Joe Bonanno, two of the more widely known dons of New York’s Five Families at the height of the mob’s power and prestige in the 20th Century. Genovese taught Galante how to kill (he once did a hit at Genovese’s behest on behalf of Mussolini). Bonanno taught him how to lead. He was Bonanno’s driver and eventually his underboss. In the 1950s, Bonanno sent Galante to Canada to set up a satellite office for the family and establish a heroin pipeline between Montreal and New York.

Canada booted Galante back to the United States in 1957 for extortion offenses and two years later he took the first of two successive drug pinches, landing him behind bars in 1962. In the coming years, Bonanno would try consolidating the entire Commission under his thumb, however without Galante by his side as his top henchman, his plans backfired, the family broke out in war and Bonanno ended up being forced into exile in Arizona.

Paroled in 1974, Galante returned to New York and immediately made his intentions of taking over the city clear – the day he walked free from federal lock-up in Lewisburg, Pennsylvania, he ordered the tombstone of one-time New York mob chief, Frank Costello blown to pieces by a hunk of dynamite. The Commission tapped Phillip “Rusty” Rastelli as the boss of the Bonannos, but Galante ignored Rastelli’s appointment and named himself the new don upon hitting the streets again.

When Rastelli went to prison, Galante seized complete control of the family. He surrounded himself with a crew of young, eager-to-please imported Sicilians drug pushers for protection and access to their connections in the foreign narcotics market and began touting himself as the city’s Boss of Bosses.

The Commission took exception. Just like when Bonanno aspired to do the same thing a decade prior, Galante was in over his head, blinded by hubris and greed, and his days were numbered.

From behind bars, Rusty Rastelli plotted with the Gambino and Genovese families to bump off Galante in spectacular fashion. His murder was to be a statement: the Commission’s word is the word of God,

Rastelli had his two top capos, Alphonse “Sonny Red” Indelicato and Dominick “Sonny Black” Napolitano, coordinate the details of the hit. First, they made a back-channel deal with Galante’s inner-circle, the so-called “Zips” from Knickerbocker Avenue, led by his personal bodyguards Cesare Bonventre and Baldo Amato, offering them promotion and a bigger piece of the family’s drug rackets if they got on board with the gangland coup de ta in the works.

Bonventre and Amato didn’t blink in selling their boss out. They even served him up for the kill. Around 1:00 p.m. on July 12, 1979, Bonventre and Amato accompanied Galante to a lunch at Galante’s cousin, Joe Turano’s Joe & Mary’s Italian-American Restaurant on Knickerbocker Avenue in the Bushwick section of Brooklyn. Turano was a soldier in the Bonanno family and he hosted a spread on the restaurant’s patio for Galante, the two handsome, trendily dressed Sicilians bodyguards he always had by his side and a Bonanno capo named Leonard Coppola, a longtime staunch Galante ally in the family.

At 2:45, in the moments after they finished their meal and as Galante was lighting up his famous cigar for a post-feast smoke, three masked gunmen burst in the restaurant and headed straight for the patio.

Once they reached the Godfather’s table, Turano stood up and exclaimed “Get out of here….What are you guys doing?”

The hit team answered him with bullets. With Bonventre and Amato moving out of the way, the table was sprayed with gunfire from shotguns and pistols. Galante, Turano and Coppola were killed instantly.

FBI informants claim the hit team was made up of Sonny Black Napolitano, Anthony “Bruno” Indelicato, who was Sonny Red’s son and Dominick “Big Trin” Trinchera, who was Sonny Red’s beefy confidant and muscle. Bruno Indelicato was photographed by a FBI surveillance unit being congratulated outside a Manhattan social club ran by powerful Gambino underboss Neil Dellacroce in the hours following the assassination.

The younger Indelicato, Trinchera and Cesare Bonventre were all rewarded with promotions to crew boss posts for their participation in the triple murder. Galante’s slaying didn’t stabilize the Bonanno family though.

Far from it. Turmoil in the aftermath of Galante’s rubout split the family into rival factions, with Sonny Black heading one and Sonny Red heading the other, and soon the rising tensions erupted with the 1981 “Three Captains Murders” depicted in the 1997 Al Pacino-Johnny Depp movie Donnie Brasco where Sonny Red, Trinchera and fellow capo Phil “Lucky” Giaccone were slain inside a Brooklyn social club. Sonny Black was killed shortly thereafter when it was discovered he allowed an undercover FBI agent to infiltrate his crew. Bonventre was knocked off gangland style in 1984.

Of the principle conspirators in the headline grabbing mafia assassination of Galante, only Bruno Indelicato would be brought to justice. He was convicted of the murder at the “Commission Trial” in 1986 and did 13 years in prison. Today, he’s 72 and back in prison for his role another Bonanno family hit from the 2000s. Baldo Amato, 67, is serving life in prison for an unrelated double-murder tied to the Bonanno syndicate as well.