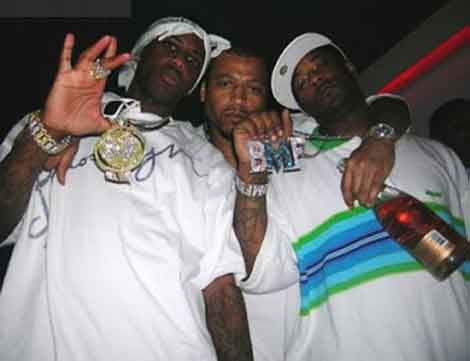 Demetrius (Big Meech) Flenory took his Black Mafia Family to epic heights: from the streets of Detroit down to Atlanta and from coast to coast. New York to L.A., the names Big Meech and BMF rang loud as could be across the United States in the early 2000s.

BMF was unlike any other African-American criminal empire in history. They were transcontinental. And they were pop culture staples and hip hop icons of the highest order.

All for selling powder. Mind you, pitching their product with an ambition, regal flamboyance and transcendent relevance never witnessed before. These were drug pushers with panache, embraced by rappers, actors and other “influencers” of their day and immediately provided access to A-List social fair. It was cool to be friends with Big Meech and BMF.

The biggest and most powerful drug-dealing organization in America from the 1990s well into the 2000s, BMF reigned supreme and became firmly embedded in pop culture like no other street gang ever had. But in 2005, the crippling Operation Motor City Mafia brought Big Meech and his kingdom of cocaine and excess crashing to the ground. Flenory is doing 30 years in prison after a 2007 guilty plea.

1985–1988 – As a teenager, Demetrius (Big Meech) Flenory starts selling $500 packages of cocaine and soon commands a small network of pushers scattered throughout Detroit’s Southwest side and a cluster of factory-town suburbs like River Rouge, Ecorse, Inkster and Willow Run.

1989 – Big Meech leaves the Motor City and relocates to Atlanta. Word on the street at the time was that Flenory had bolted from town after butting heads with Southwest Detroit drug boss Layton (The Beast) Simon.

1995 – Big Meech hooks up with Wayne (Maniac Wayniac) Joyner, who has a supply connection with a Mexican cartel he was introduced through intermediaries in California and starts expanding his BMF business model.

1996 – Big Meech’s baby brother, Terry (Southwest T) Flenory, who had been running the shop in Detroit, relocates to Los Angeles. Benjamin (Blank) Johnson, a childhood friend of the Flenorys, is left in charge of the BMF “mother chapter” in Motown.

October 31, 1997 – Drug boss-turned-informant Dennis (The Duke) Kingsley-Walker is gunned down behind the wheel of his Nissan Maxima as he drove onto the exit ramp of a downtown Atlanta expressway near trendy Buckhead. The hit went down just hours after he was released from a three-year prison term and he had stopped for drinks at Atlanta’s Westin Peachtree Plaza Hotel to celebrate his homecoming.

*Kingsley-Walker was the first Detroiter to plant a flag in the “Hotlanta” dope game in the early 1980s. To a reduce a prison sentence from a 1994 federal drug case, he testified against his partner Tony Valentine, who was a close friend of Big Meech’s. Per an unsubstantiated claim by a federal informant, Big Meech was the shooter in the Kingsley-Walker hit. Nobody has ever been arrested for the Kingsley-Walker homicide.

Spring 2001 – The DEA in Detroit and Atlanta begin receiving rush of tips on the ever-expanding BMF organization and its charismatic leader Big Meech Flenory.

Winter 2003 – Big Meech launches the BMF music label, placing a series of Scarface-themed billboards up along the I-75 highway running from his hometown of Detroit to his adopted hometown of Atlanta, declaring “The world is BMF’s.” The label has one, uninspiring artist in rapper Barima (Bleu DaVinci) McKnight, but maintains a cozy affiliation with rising rap superstar Young Jeezy.

*DEA agents are on hand snapping photos at an after party at Big Meech’s suburban Lithonia residence, known in BMF circles as the “White House” that lasted into the early morning hours of the next day and was attended by all BMF brass and a boatload of celebrities from the music and entertainment world. More than one DEA informant claims Combs got some of the start-up cash for his 1990s hit-factory Bad Boy Records label from the BMF crew.

September 7, 2003 – BMF Chief Financial Officer William (Doc) Marshall kills an assailant in a home invasion of his pricey townhouse located in Atlanta’s Midtown neighborhood. Marshall kept the books for BMF and owned a luxury car dealership. He was the only member of BMF that spoke and did business on behalf of both Big Meech and Southwest T.

October 28, 2003 – The DEA officially starts an investigation into BMF and dubs it Operation Motor City Mafia. A file on Big Meech had first been opened by the agency in 1990.

November 11, 2003 – After an altercation with the BMF entourage inside the Atlanta club Chaos, Anthony (Wolf) Jones and Lamont (Riz) Girdy are killed in a shootout with Big Meech in the parking lot. Wolf Jones was Puffy Combs’ personal bodyguard. Big Meech is wounded in the exchange of gunfire and avoids getting charged with Jones and Girdy’s murders on the grounds of self-defense.

November 17, 2003 – Securing a search warrant in the aftermath of the Chaos shootout, the DEA raids the White House and finds a machine gun, a money counter, BMF ledgers and paperwork for custom-designed vehicles made with secret compartments for couriering drugs cross country.

April 5, 2004 – Detroit BMF soldiers Calvin (Playboy) Sparks and Chris (Pig) Triplett are pulled over in St. Louis by Missouri State Police driving an SUV with nine kilos of cocaine inside.

April 11, 2004 – BMF courier Jabari Hayes is pulled over in Phelps County, Missouri by highway patrolmen driving a motor home containing 100 kilos of cocaine and more than a pound of marijuana.

July 25, 2004 – Atlanta resident Rashannibal (Prince) Drummond is killed by BMF’s pint-sized and trigger-happy third-in-command, Fleming (ILL) Daniels, in the parking lot of The Velvet Room club in Atlanta when the two got into an argument over Daniels nearly hitting Drummond backing out of a parking spot in his Porsche SUV. Drummond was beaten down by several BMF members for slapping his palms on Daniel’s vehicle in anger and then Daniels exited the car and shot a slumped and helpless Drummond at point-blank range.

*Hackett and Carter are killed over the belief that Hackett was about to flip and give up Kiki Graham and his BMF-supplied satellite outpost in Greenville, South Carolina.

November 5, 2004 – BMF courier Jeff Leahr is pulled over in his car by police in Atlanta where they discover a duffle bag with 10 kilos of cocaine. Leahr worked for BMF lieutenant Omari (O-Dawg) McCree.

November 28, 2004 – Big Meech leaves Atlanta and relocates to Miami. He rents a mansion on South Beach and starting in January 2005, he begins hosting a weekly “BMF Night” at a club called Crobar in Miami Beach.

*By the end of 2004, Big Meech and Southwest T are no longer on speaking terms, having fallen out over Terry’s belief that his big bro’s in-your-face behavior and jet-setting antics were bringing too much heat on them.

May 10, 2005 – Rapper Henry (Pookie Loc) Clark is killed when he tries robbing rival rap star Gucci Mane inside a house in Decatur, Georgia, just outside Atlanta.

*Clark was best friends with “trap rap” maven and BMF affiliate Young Jeezy, who was feuding with Gucci Mane at the time of the robbery-gone-wrong ending in Gucci Mane shooting Pookie Loc to death in self-defense. Prosecutors stated in future court briefs the attack on Gucci Mane had been ordered by BMF.

May 11, 2005 – A shootout erupts during the arrest of St. Louis BMF crew chief Deron (Wonnie) Gatling on drug and racketeering charges out of Missouri at Gatling’s fiancé s house in suburban Atlanta.

*With Gatling hiding in the attic and DEA agents and U.S. Marshals storming the pricy, neatly-manicured residence, seven gun shots aimed at law enforcement ripped through the front yard. The agents returned fire and quiet Chamblee, Georgia was turned into a makeshift war zone for a few minutes on a Wednesday morning in the spring of 2005. Cell phone records show Gatling called Sin City Mafia boss Jerry (J-Rock) Davis from the attic and authorities believe Davis

dispatched a team of goons to go shoot it out with the feds. The Sin City Mafia was an offshoot of BMF.

May 23, 2005 – R&B luminary Bobby Brown’s nephews Shane and Kelsey are stabbed in an altercation with a BMF entourage at Justin’s in Atlanta, the same restaurant that hosted Big Meech’s star-studded 36th birthday bash two years before. BMF soldier Marque (Baby Bleu) Dixson is arrested for the attack three months later.

* Dixson, the little brother of Bleu DaVinci, is shot to death by a girlfriend after an argument at a club in 2007.

*McCree becomes the first ranking member of the BMF empire to jump ship to the government.

*Flenory gets music producer Damon Thomas, once married to Kim Kardashian, and jeweler to the stars, Jacob (The Jeweler) Arabo, to falsify a trail of ownership to the purchases.

August 9, 2005 – O-Dawg McCree pleads guilty to federal drug charges in Atlanta, marking the first of many convictions of BMF members.

October 21, 2005 – Big Meech is taken into custody in Texas, arrested without incident at the mansion he was renting outside Dallas.

*The DEA seized Flenory’s Bentley, $700,000 in cash, a pound of weed, a cabinet-full of ecstasy pills and three guns.

*Boyd is Blank Johnson’s brother and becomes the first of the Flenorys inner circle to join Team America. Johnson and Slim Bivens soon follow Boyd over to the comfy confines of government protection.

June 15, 2006 – The DEA in New York raids Jacob the Jeweler’s Manhattan flagship store Jacob & Co off Park Avenue on the Upper East Side.

January 22, 2007 – BMF’s No. 3 man ILL Daniels is charged with Prince Drummond’s murder from 2004 in the parking lot of the Velvet Room, along with drug and weapons offenses.

February 5, 2007 – Out on bond, J-Bo Brown is pulled over in his native St. Louis with a loaded 9 millimeter pistol, $5,000 and a pound of marijuana. J-Bo is taken into custody and his bail is revoked.

May 4, 2007 – Jerry (J-Rock) Davis and his Sin City Mafia BMF branch are indicted in an offshoot investigation from Operation Motor City Mafia in a case filed in Georgia.

November 12, 2007 – Lawyers for Big Meech and Southwest T arrange for their clients to have a summit in the back of the federal courthouse in downtown Detroit to iron out their differences in lieu of a joint plea deal. The sit-down goes bad right off the bat and quickly evolves into a shouting match.

*Nonetheless, both Flenorys come to plea agreements over the next few days.

*The only witness willing to testify, Alexander’s best friend, Anthony Alls, was shot gunned to death outside the barber shop he worked at in the hours before he was scheduled to take the stand in a grand jury proceeding. Cooley, Johnson and Woolfolk all pleaded guilty to manslaughter charges and did five years of prison time.

August 18, 2014 – Detroit BMF soldier Pig Triplett is pulled over in Ohio with two pounds of heroin in the air filter of his car. Triplett was convicted in Operation Motor City Mafia in the 2000s.

July 31, 2015 – Detroit BMF lieutenant Chauncey (C-Bear) Johnson is released from prison from the Motor City Mafia bust and declares that BMF intends to rebrand and become a community and youth empowerment organization and eventually a luxury lifestyle brand.

August 2016 — Rap mogul 50 Cent announces that he will produce a television series based on BMF’s rise and fall.