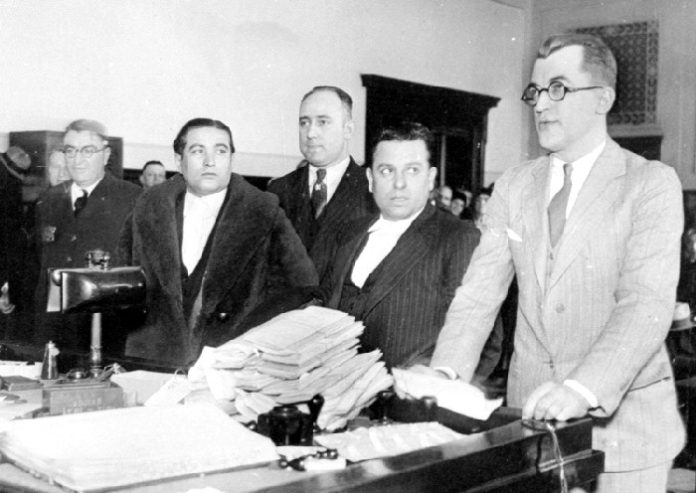 August 21, 2022 — The funeral and preceding wake for Detroit mob founding father William (Black Bill) Tocco fifty years ago featured a physical altercation between Tocco’s sons and nephew and an FBI surveillance team assigned to keep tabs on the events, per Tocco and Tocco’s sons FBI files.

Black Bill Tocco died of heart disease on May 28, 1972 in a Grosse Pointe Park, Michigan hospital at age 75. His status as American mafia royalty was undisputed for four decades, recognized and respected coast to coast and on both sides of the Atlantic Ocean.

Tocco’s wake and funeral drew mob dignitaries and leaders from around the United States. One of his sons was married to the daughter of one of the original Godfathers in the New York mafia and his daughter was married to the son of the mob in Southern California.

On the day before he was laid to rest and on the morning of the funeral, there was a pair of tense interactions between FBI agents and Tocci’s sons, “Black Jack” and “Tony T” and his nephew “Tony Z.” Jack and Tony Tocco got face-to-face with two FBI agents outside Holy Family Church in Detroit and had to be separated, per the Toccos FBI files. Tony Zerilli aka “Tony Z” verbally sparred with agents at Bagnasco’s Funeral Home the day before and threw food and trash at agents from a window in the funeral

In 1931, Tocco and his brother-in-law, first-cousin and best friend Joe Zerilli declared victory in the Crosstown Mob War, consolidated all of the Motor City’s bootlegging gangs under one solitary banner known as the Detroit Partnership, the Detroit Combination or the Tocco-Zerilli crime family. When Black Bill went to prison in 1936 for two years on a tax evasion case, Zerilli took the reins of the notoriously discrete and diverse organization and held them for the better part of the next half century.

After Tocco came home in 1938, he stepped into voluntary semi-retirement, relocating to Southern Florida. All in all, he would go on to beat a total of 8 felony raps in the U.S. criminal justice system. Besides his alleged ill-gotten gains, the always dapper and tan Tocco accrued great legitimate wealth through investing in beer-bottling plants and distribution centers, real estate and transportation and chemical companies.

Joe Zerilli passed away peacefully in the fall of 1977, handing over the crime family to his nephew and Black Bill’s eldest son, “Black Jack” Tocco, who ruled until 2014 when he, like his father, died of a heart ailment. Black Jack was found guilty in a federal racketeering conspiracy case in 1998 and did 18 months in prison in a controversially-light punishment. The gangland legacy Black Bill left for Black Jack to grapple with — one he subsequently made his own — was the inspiration for the 1981 critically-acclaimed film Absence of Malice, with Paul Newman playing a character partially based on Black Jack Tocco.

Black Bill’s youngest son, Tony Tocco, was a longtime capo in the Detroit mob and eventually served as the crime family’s acting boss and consigliere. He died of natural causes in 2012. Tony Zerilli was Black Jack’s underboss for 25 years before a falling out in the 2000s left the two men estranged in a bitter feud over money and stature. Zerilli died in 2015, having lived out his final years in Florida.