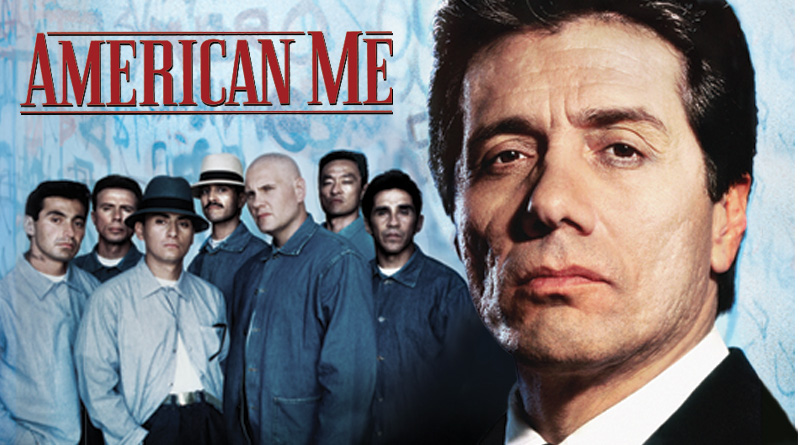 The Mexican Mafia was so offended by the critically-acclaimed 1992 film American Me, the violent and vengeful crime syndicate murdered a trio of consultants to the movie and threatened to kill the movie’s director and star Edward James Olmos, according to California State Police documents and court records. American Me is considered historical fiction, a raw and epic tale of one Hispanic man’s journey through the California prison system and his role in creating the Mexican Mafia, known around the world as “La Eme” (The ‘M’ in Spanish).

Charles (Charlie Brown) Manriquez, a Mexican Mafia member and unofficial consultant to American Me, was slain in March 1992 inside a Los Angeles housing project and La Eme stronghold less than two weeks after the film premiered. Ana (The Gang Lady) Lizarraga, a community youth counselor and official on-set paid consultant to Olmos, was shot to death in front of her house in May 1992. Manuel (Rocky) Luna, like Manriquez, a La Eme member who had served as an unpaid consultant for American Me, was killed a little over a year later. Olmos himself received a number of thinly-veiled threats on his life from the Mexican Mafia in the aftermath of the film’s release, causing him so much concern he contacted the FBI and went into seclusion for a brief period of time.

The character Olmos played in American Me was named “Santana” and based loosely on articulate and magnetic Mexican Mafia co-founder Rodolfo (Cheyenne) Cadena. The way the Santana character was portrayed in the movie is reportedly what so greatly enraged La Eme, specifically then-Godfather Joe (Peg Leg) Morgan, a fellow syndicate co-founder and close friend of Cadena’s who is also depicted in the film but called, “J.D.”(played by actor William Forsythe in the movie). Morgan wasn’t of Chicano descent, yet nevertheless rose to astronomic heights in Hispanic gang culture due to his sheer brutality and contacts he had made as a youth growing up in an all-Chicano neighborhood in East L.A.

The Mexican Mafia’s current Orange County (CA) boss, 73-year old Peter (The Fury) Ojeda, was groomed in the ways of La Eme by Cadena and Morgan in the late 1960s and early 1970s while incarcerated with them. Ojeda is on trial right now for racketeering and extortion in federal court.

La Eme was founded in around 1957 at the Deuel Vocational youth offender camp in Northern Cali’s San Joaquin County. Within a few short years, it spread like wildfire across the west coast penal system and then eventually onto the streets.

Cadena, an iconic figure in the annals of the west coast underworld, was murdered by members of rival gang, Nuestra Famillia (a Northern California Hispanic prison sect) in 1972. Morgan died of cancer behind bars in 1993, a year after American Me hit theatres and only months following him filing a lawsuit against Olmos and the makers of the film for defaming him and stealing his likeness without providing compensation.

Academy Award and Tony Award-nominee Olmos re-wrote portions of the original script, twisting the facts around in Cheyenne Cadena’s life story, at least partially, to provide the role a more redemptive quality. The rewrite didn’t sit well with Cadena’s former chums in La Eme, feeling the creative liberties Olmos took with the character were a giant affront to Cadena’s legacy as a martyr.

Most upsetting about the film to the Mexican Mafia were multiple male-rape scenes, one in which Olmos’ Santana is sexually assaulted by another inmate at the youth camp they were both in, the implication that he had trouble performing sexually with a woman and the fact the character turns his back on La Eme at the end of the movie, leading to his vicious murder by his own gang. In reality, the Mexican Mafia forbids homosexual sex and Cadena never left La Eme, nor did his comrades ever turn against him.

Cadena was stabbed almost 100 times and thrown over a third-floor prison balcony by a group of Nuestra Familia assassins on December 17, 1972 in the wake of his controversial attempt at forging an alliance of between his Mexican Mafia, Nuestra Familia and the Black Guerilla Family (the primary African-American prison gang) fell apart. The carrying out of Santana’s murder in American Me mirrored the exact manner Cheyenne Cadena was slain.

La Eme’s dissatisfaction with the movie’s depiction of Cadena and the Mexican Mafia in general was evident within weeks of its’ March 13, 1992 premiere in theatres around the country. “Charlie Brown” Manriquez, a 53-year old La Eme gangbanger who Olmos consulted with in the years and months leading up to American Me’s 1991 shooting schedule, was gunned down inside the Ramona Gardens housing project on March 25 by the Mexican Mafia hitman team of David (Smiley) Gallardo and Randy (Cowboy) Therrien – they’d go on to be convicted in that murder, as well as others.

Ramona Gardens is located in Boyle Heights, California and is the oldest and biggest Hispanic housing project in L.A. “The Gardens” has long been an epicenter of La Eme’s “outside” operations. Ana Lizarraga, Olmos’ No. 1 advisor on the American Me set, was an anti-gang counselor who worked at a community center inside Ramona Gardens trying to steer neighborhood youth away from a life of crime. Ligrew up in Ramona Gardens.

She was shot at point-blank range in the head by recently-paroled Mexican Mafia prospect Jose (Joker) Gonzales on May 13, 1992, executed in her driveway in front of her son and boyfriend. Besides drawing La Eme’s ire for her helping Olmos with his shaping of the syndicate’s on-screen portrayal, the 49-year old “Gang Lady” was also suspected of being a police informant.

Gonzales, just weeks removed from being sprung out of Folsom Prison, ambushed Lizarraga as she came out of her home and began packing up her car for a daytrip with her family to the beach. He was apprehended minutes later running from the scene and convicted at a forthcoming trial. Per court records, Joker Gonzales, 29 at the time of Lizarraga’s murder, received official initiation into La Eme as a reward for a job well done in killing the Gang Lady.

Similar to Charlie Brown Manriquez, Rocky Luna wasn’t a paid consultant on American Me, but aided Olmos in his research, meeting with him in both 1990 and 1991 to discuss Latino gang culture. Over the summer of 1993, Luna had upset his superiors in La Eme by dragging his feet in carrying out an assigned execution of another Mexican Mafia member. With Luna already treading on thin ice from the American Me consultation, his days were numbered.

On August 7, 1993 he was riddled with a fatal barrage of bullets while sitting behind the wheel of his car by The Avenues Gang boss Alex (Pee Wee) Aguirre. The Avenues Gang is a subset of La Eme. Aguirre was convicted of the gangland slaying in 1997.

Back in the 1990s, the L.A. Times reported that as the bodies began dropping in the fallout from his movie, Olmos became so worried about his own personal safety that he arranged a meeting with retired Mexican Mafia leader and hitman, Ramon (Mundo) Mendoza and requested help. Mendoza, who penned a book about his life in La Eme (Gang of Gang’s), was the basis of a character in American Me played by Pepe Serna, famous for the chainsaw scene in 1983’s Scarface.