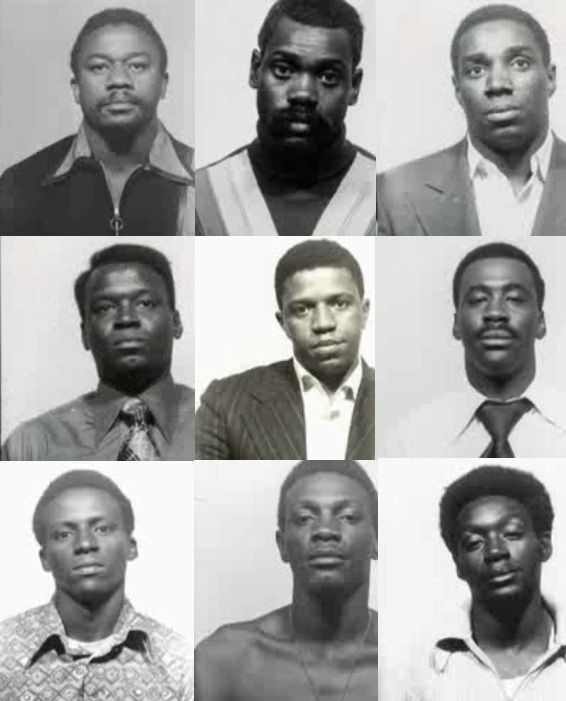 The Philadelphia Black Mafia terrorized the east coast for more than a decade, from the late 1960s all the way into the early 1980s. “PBM” was a notoriously brutish and violence-prone crime syndicate that tried veiling their activities in the name of religion, latching on to the Nation of Islam and Black Muslim movement. In reality, the Philly Black Mafia were a likeminded group of tough-as-nails extortionists, drug dealers, pimps, numbers runners, armed robbers, racketeers and hitmen. Founded in the fall of 1968 by Sam Christian and several of his loyalists, PBM reigned high, mighty and murderous through the underworld’s “Superfly & Disco Eras” and beyond.

Below is a timeline of murders attributed to the Philly Black Mafia organization, compiled with the aid of Sean Patrick Griffin’s superb book, Black Brothers, Inc. – The Rise& Fall of The Philadelphia Black Mafia.

April 5, 1970 – Local hoodlum Robert Swint is killed by Bop Daddy Fairbanks after an argument erupts between Fairbanks and Swint’s brother, Nate, at a late night party hosted by Hudgins

October 27, 1971 – Local lounge patron Wardell Green is shot to death inside a club by Russell Barnes after arguing with Barnes cousin days prior

June 5, 1973 – Flamboyant businessman, racketeer and Philly Black Mafia associate, Major (The Maj) Coxson, is shot to death inside his New Jersey mansion over a botched heroin deal e was conducted with PBM

September 18, 1973 – Velma Green, Wardell Green’s sister and govt. witness, is murdered on verge of testifying against Barnes for killing her brother

October 30, 1973 – Local contractor in Camden, NJ and PBM extortion target John (Johnny Boy) Clark is shot by BMF enforcer Lucius Johns in his own home in front of his wife and young son

November 1973 – Local hoodlum Robert James is shot death on his street, a block away from his house, after beefing with PBM

December 29, 1974 – Charles (Bubbles) Price: early PBM member and part of Hanafi Muslim Massacre hit squad tortured and hanged in prison for the belief that he was about to or already had turned state’s evidence

June 15, 1975 – Philly Black Mafia co-founder Jerome Barnes is shot in the back of the head on a street corner, dying three days later, after accruing too many street feuds to survive

December 11, 1975 – Alan & Renate Wellman: Alan was a lawyer of and future government witness against Big Phil Blair, him and his wife were slain execution style inside their San Fernando, California home in the weeks leading up to his scheduled testimony in court (Blair would go on to be convicted of the double homicide)

January 1976 – Lou & Yetta Gruby: Lou Gruby was an employee at Dubrow’s Furniture Store and a witness in the Dubrow Furniture Robbery trial, him and his wife were executed inside their own home

January 23, 1977 – 20th-&-Carpenter Gang leader Donald Robinson is killed in a shootout with former members of his gang that had swung their loyalty to the Philly Black Mafia.

February 14, 1978 – Shirley Kelly, the wife of Ernie Kelly, who testified against the Philly Black Mafia, was stabbed to death inside her home in retaliation for her husband’s cooperation and testimony at a 1974 kidnapping and robbery trial

July 24, 1978 – Late-1970s Philly Black Mafia leader Clarence (Squeaky) Hayman is shot to death after an argument with an extortion victim of his named Barry Wright

June 12, 1980 – Barry Kelly: killed as retaliation for his father Ernie Kelly’s testimony in court against members of the Philly Black Mafia at a 1974 trial

December 7, 1985 – Edward (Boney Bill) Perry, a lieutenant in the drug operation oversaw by William (Cadillac Willie) Rispers, a former Tyrone Palmer protégé, is killed as tensions on the street rise with the release from prison of PBM leader Russell Barnes

January 23, 1986 – PBM leader Russell Barnes is found dead in an alley in Southwest Philadelphia, shot in the back in the head