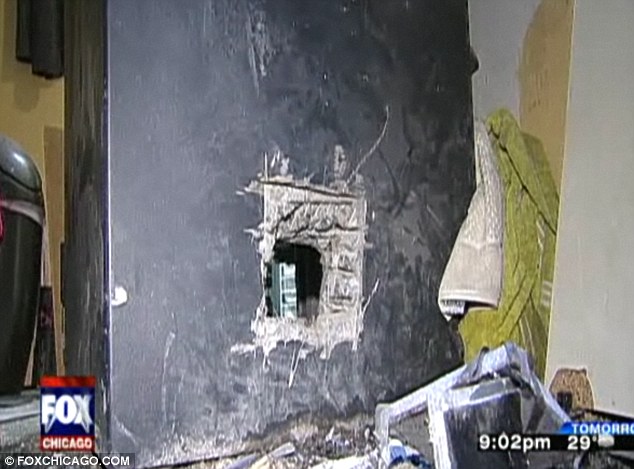 The hours immediately after former mega bookie and high-level Detroit mafia associate Allen (The General) Hilf passed away due to kidney failure two years ago this week became a mad rush to his condominium in West Bloomfield, Michigan by his associates in the local Motor City underworld in order to try and pocket the bundles of cash the nationally-renowned master handicapper had stashed inside his walls and basement ceiling, say multiple exclusive Gangster Report sources.

One local mob insider says it wasn’t much a secret either.

“Everybody knew Allen had a shit ton of money at his house and first one to the flag was going to fatten their pockets substantially, guys were scheming for years before he finally kicked,” he said.

Hilf, longtime best friends with reputed Detroit mob boss Jack (Jackie the Kid) Giacalone, died on January 6, 2014 at the age of 77. He was buried on January 8 with a pair of dice in his hand. At the time of his death, Hilf was considered the biggest bookmaker in the Midwest and one of the biggest in the whole United States, not to mention allegedly serving in an advisory role and chief-of-staff capacity to Giacalone in his day-to-day running of the Zerilli-Tocco crime family.

Unable to be “made” into the mafia because of his Jewish heritage, “Fat Allen” had headed the Giacalone crew’s gambling operations since the early 1970s and the reign of Jackie the Kid’s dad and uncle Vito (Billy Jack) Giacalone and Anthony (Tony Jack) Giacalone, the syndicate’s street bosses from the early 1960s into the New Millennium. And he made an enormous amount of money. Despite his wealth and gangland status, Hilf lived modestly, dressing in jogging suits and living for years in an unassuming condo in the suburbs.

Some of that cash, according to sources and FBI confidential informant records, he hid at his condo located in a subdivision at the corner of 15 Mile Road and Orchard Lake Road, directly across the street from the Stage Delicatessen, a neighborhood staple for decades and his and Jackie Giacalone’s favorite lunch spot. The 65-year old Giacalone is known to meet with his lieutenants at the Stage to eat and discuss business in the parking lot away from possible bugs – Jackie the Kid was allegedly anointed the Zerilli-Tocco crime family official Godfather in the months following Hilf’s death, after previously serving as first street boss (2000-2012) and then acting boss (2012-2014) on behalf of deceased don Giacomo (Black Jack) Tocco, who died of heart failure in July 2014.

Experts on the situation say Giacalone walked away with the lion’s share of the haul from Hilf’s place, believed to be a total ranging from anywhere between five hundred thousand dollars to as much as a cool two million bucks.

“Come on, what ya expect, the guy’s Jackie’s closest friend and the Giacalone crew’s biggest earner dating back to when fucking Richard Nixon was in the White House and you think the Jackie ain’t getting his hands on what Fat Allen left behind?,” one Gangster Report source said.

In 1991, Hilf, Jackie Giacalone and his dad, Billy Jack, were lead defendants in a RICO indictment charging them with running one of the largest sports books in the country. They were each convicted and did time behind bars. The FBI investigation that led to the case included never-substantiated allegations of NBA point shaving involving Hilf and Hall of Fame point guard Isiah Thomas (Detroit Pistons).

The case itself did reveal Hilf holding high-stakes dice games at Thomas’ Metro Detroit mansion in the 1980s and early 1990s. Thomas was called in front of a federal grand jury in 1990 to account for hundreds of thousands of dollars worth of checks he cashed through a convicted mafia associate’s chain of grocery stores, but wasn’t charged in the indictment. Authorities speculated Thomas was possibly trying to launder gambling proceeds with the aid of the grocer, Emmett Denha. a prominent local businessman and then-Giacalone crew crony who Thomas admitted was his best friend.

He told the grand jury the checks were his wife’s weekly allowance and didn’t deny hosting the mob-backed casino nights at his mansion. Sources close to Hilf when he was still alive claim Hilf, often seen sitting courtside at Pistons games in the “Bad Boy,” repeat NBA-titles era (1988-1990), held a bitter disdain for Thomas in the aftermath of his bust.

Hilf’s final trip to the clink was in the late 1990s for a parole violation. He was an unindicted co conspirator in a 2006 RICO case levied against Jackie Giacalone in which Giacalone beat the charges at trial. Giacalone’s relationship with Hilf in the years leading up to his passing garnered comparisons within the Detroit mob rank-and-file to the fictional friendship shared by New Jersey “TV Mob Don” Tony Soprano and Herman (Hesh) Rabkin on the groundbreaking HBO show, The Sopranos.