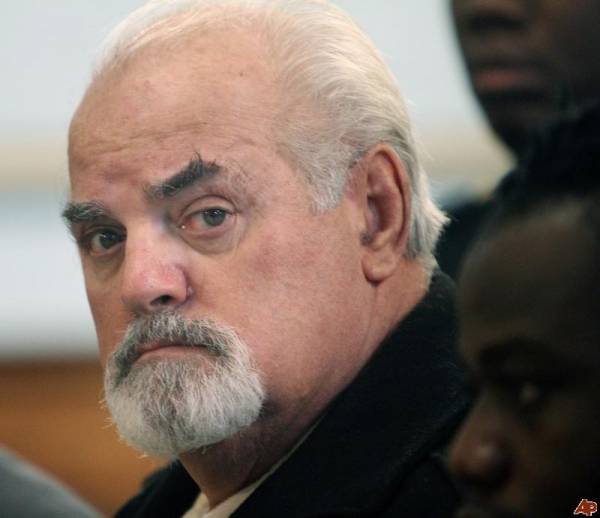 A mob crew once loyal to famously-feared New England mafia captain and reputed hit man Frank (Bobo) Marrapese imploded from the decade-plus long investigation into the gangland slaying of fellow mob crew leader Dickie Callei which took place at Marrapese’s headquarters, the Acorn Social Club, in Providence, Rhode Island in the spring of 1975. Bobo Marrapese was found guilty of the murder at a jury trial a dozen years later, more than one of his crew members having jumped ship to Team America and testifying against him in court.

Marrapese’s name was back in the news this month when he did an interview from prison with the Crimetown podcast (Gimlet Media – HBO’s docu-series The Jinx) regarding the 1982 road-rage murder of 20-year old civilian Ronnie McElroy, a crime he was charged with and tried for, but acquitted of. Today, the squat, barrel-chested and as-always-imposing Marrapese, 74, sits as property of the state of Rhode Island, serving the last few years of a prison sentence for racketeering, bookmaking and extortion bust he incurred in 2011. He was released from federal prison in April 2008 after serving more than 25 years as a guest of the government for possessing a hijacked truckload of La-Z-Boy sofa chair recliners and for being the triggerman in the Callei homicide.

In the first half of the 1970s, Dickie Callei and Bobo Marrapese were both rising powers in the Patriarca crime family’s Providence wing under syndicate namesake Raymond Patriarca, who was incarcerated at the time. With Patriarca gone from the scene, Callei and Marrapese jockeyed for positioning in the Providence underworld.

Marrapese’s inner circle, made up of William (Billy Blackjack) DelSanto, Alfred (Chippy) Scivola, Richard (Moonie) DiOrio, Frank (Little Frankie) Martellucci, John (Big Johnny) Chakouian and Billy Ferle, could be found most nights at Marrapese’s Acorn Social Club in Federal Hill, Rhode Island’s Little Italy. Callie was callously gunned down by Marrapese inside the Acorn Social Club in the early-morning hours of March 15, 1975, his body transported across state lines by members of his crew and buried just outside the grounds of the Pine Valley Golf Club in a gravel pit in Rehoboth, Massachusetts, only to be discovered within hours by police.

DelSanto, a close friend and crony of disgraced former Providence Mayor Vincent (Buddy) Cianci, is allegedly retired from mob affairs these days. He reportedly rose to capo status after Marrapese was put in the slammer in the 1980s. Scivola was arrested with Marrapese in the La-Z-Boy hijacking case in 1981 and in the same 2011 racketeering case Marrapese is serving time now for his role in. The rest of the crew fell apart in the wake of Callei’s murder.

The simmering feud between Marrapese’s Acorn Social Club crew and Callei’s own equally-powerful Federal Hill mob troop boiled over into violence in the early months of 1975 with the murder of Callei lieutenant Alfred (Keystone Al) Lepore. Big Johnny Chakouian and Little Frankie Martellucci were beefing with Lepore and when Lepore allegedly threatened to harm the 300-pound Chakouian’s wife and children, Chakouian and Martellucci killed him in retaliation.

The Lepore hit worried Marrapese – he believed Callei would seek to avenge his crew member’s murder by launching a counter attack on the Acorn Social Club mob clique, according to court records. Marrapese quickly concluded a preemptive strike and executing Callei was the best manner of dealing with the situation, per testimony at his 1987 trial.

On the evening of March 14, 1975, the Friday to begin St. Patrick’s Day weekend that year, Marrapese lured Callei to his social club under the pretense of burying the hatchet. Chakouian and Martellucci arrived at the establishment after midnight on March 15 with their girlfriends and were instructed by Marrapese to tell their lady companions to leave. At approximately 1:30 am, Marrapese came out from around the bar, equipped with a 25-caliber pistol he was hiding and began joking with Callei before shooting him five times at point-blank range from behind.

Getting help from Chakouian, Martellucci and his driver and surrogate little brother Billy Ferle, Marrapese carried Callei’s body outside into the club’s parking lot and stuffed him in the trunk of Callei’s own burgundy-colored Cadillac. Ferle had kicked Callei twice in the side of the head following Marrapese pumping him full of lead. Before sending Chakouian and Martellucci off to a prearranged hole they had dug near a golf course Martellucci frequented to dispose of Callei, Marrapese removed a butcher’s knife from the club’s kitchen and plunged it into Callei’s torso several times prior to shutting the trunk door and saying goodbye to his prey. Chakouian and Martellucci abandoned Callei’s Cadillac in Fall River, Massachusetts before returning to Rhode Island.

Even though a patrolling policeman found Callei’s body the very same day Chakouian and Martellucci buried it, the case went cold for eight years until members of Marrapese’s crew were behind bars for unrelated state crimes in the early 1980s and began butting heads with each other. Moonie DiOrio, angry with Little Frankie Martellucci over a bust in New Bedford, Massachusetts which landed them in prison, went to the feds in August 1983 and although he eventually recanted his statement, implicated the Acorn Social Club gangland contingent for being responsible for the Callei hit.

Martellucci flipped in October of that year and was followed by Billy Ferle. While DiOrio couldn’t speak to the details of Callei’s murder because he wasn’t present, Martellucci and Ferle could, since they were.

Ferle and Martellucci testified against Marrapese and Chakouian and entered the Federal Witness Protection Program. Chakouian died of a heart attack in prison. In the years after he clipped Callei, Marrapese and his boyhood pal Billy Blackjack DelSanto were made into the New England mafia together in a 1977 ceremony held in Boston’s North End.

According to Marrapese’s interview with Crimetown, it was Ferle, not him, who beat Ronnie McElroy to death with an aluminum baseball bat in August 1982 after McElroy interrupted a drag race between the two wiseguys on Broadway in Providence and began hurling obscenities before attacking Marrapese and a friend of his named Bobby Walason. Marrapese and Walason – also a part of the recent Crimetown podcast, were found not guilty of McElroy’s murder at a 1988 trial.