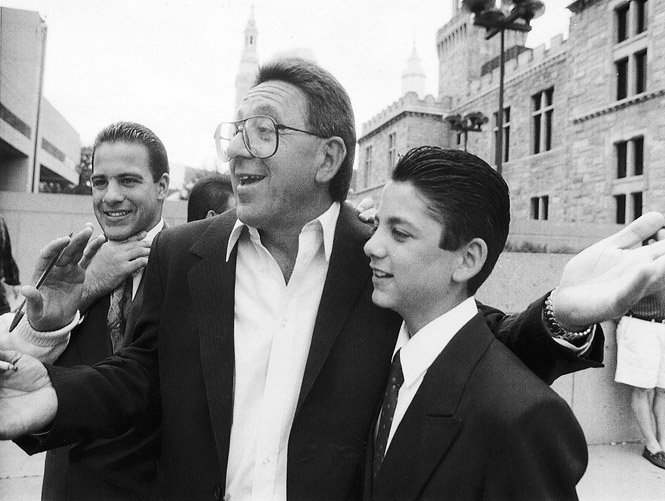 Former Springfield, Massachusetts mob powers Adolfo (Big Al) Bruno and Anthony (Skip) Delevo were both groomed in east coast gangland circles by the notorious Scibelli brothers. Besides their similar upbringing in the area’s mob, the two were a picture of contrasting styles and well-known rivals.

The brash and boisterous Big Al Bruno was gunned down 14 years ago this week on November 23, 2003 outside his Our Lady of Mt. Carmel Social Club. Delevo, a more inconspicuous, understated wiseguy with considerably less thirst for the spotlight, died in prison serving a sentence for racketeering two years later. Their respective downfalls opened the door for the once-stable, prosperous Western Mass mafia crew to descend into the depths of despair, deceit and virtual self-destruction. And as a result, today, the Greater Springfield underworld is a mere shell of its former self.

Bruno and Delevo traced their roots in the Springfield mob, an extension of New York’s Genovese crime family, to the last days of old-school don Salvatore (Big Nose Sam) Cufari, who ruled the city’s mafia regime from the end of Prohibition into the 1970s when he retired and turned over the keys of the operation to his seasoned No. 2, Frank (Frankie Sky Ball) Scibelli. While Bruno was mentored by the flashy, rough-around-the-edges Frankie Sky Ball, Delevo came up under the direct tutelage of his more refined younger brother, Albert (Baba) Scibelli. Per law enforcement documents, Bruno helped the Scibellis brothers oversee sports gambling and extortion endeavors in the region and Delevo was in charge of the local policy lottery and loan sharking business.

The consummate gangland politician, Bruno frequently traveled across the east coast mafia landscape, hobnobbing with and relaying messages to crime family leaders in New York City, Boston, Providence, Connecticut, New Jersey, Philadelphia and Northeast Pennsylvania. Delevo was more of a homebody and didn’t often venture outside the Springfield area, where he ran a successful concessions business catering to sporting events, concerts and fairs and had a piece of the strip club the Mardi Gras, the biggest nude dancing establishment in town.

Consistent with his larger-than-life persona, Bruno was often out and about at the restaurants, bars and nightclubs he had ownership interests in around Springfield’s traditionally mobbed-up South End neighborhood. He and Frankie Sky Ball maintained an office where they ran Las Vegas casino junkets out of. On the other end of the spectrum, Delevo would hold less-overt meetings with associates at his concessions warehouse in the city’s West End section.

According to informants and court records, despite their differences in public displays of behavior, neither Bruno, nor Delevo were afraid to get their hands dirty with mob “wet work.” Bruno was allegedly the triggerman in the 1979 murder of feared Springfield Goodfella, Antonio Facente, a hit he was reported to brag about to associates. In 1991, he was arrested for the attempted murder of upstate New York mobster Joe Maruca of Northeast Pennsylvania’s Bufalino crime family ten years earlier. Delevo was an unindicted co-conspirator in the Maruca case in which Bruno was acquitted of at a 1993 trial.

As the aging Frankie Sky Ball neared retirement later in the decade, the assumption on the street and with area mob watchers was that Bruno, his longtime right-hand man, would take the reins of the Springfield crew. However, by 1998, it was Delevo and Baba Scibelli who had ascended to the top of the local underworld food chain. But when they were both busted in a 2000 racketeering case, Big Al took over with the pair hamstrung by their legal problems – Delevo was sent away to prison in 2003, on the same week, Bruno was slain and Baba made a deal with the government sparing himself time behind bars in exchange for a plea admittin

g his membership in the mafia.

Frankie Sky Ball Scibelli had passed away peacefully in the summer of 2000. He was 87 years old. The 65-year old Delevo died of cancer in the can in 2005. Baba Scibelli made it to 91 before dying of natural causes in 2012.

Shortly after grabbing the mantle, Bruno was soon on shaky ground and his own protégé Anthony (Bingy) Arillotta was fast to leverage displeasure in the Genovese clan towards Big Al for his own gain. In early 2003, Bruno angered Genovese Family boss Arthur (Little Artie) Nigro by bad mouthing Nigro for siding against him in a dispute over a cigarette importing deal out of Florida, per court testimony. Sources also claim around this same time, an unnamed member of Bruno’s inner circle upset Nigro by refusing to abide by another ruling he had made in a New York sitdown related to a separate business deal.

The young and ambitious Arillotta pounced on the acrimony, sidling up to Nigro and greasing the wheels of insurgence in Nigro’s New York stomping grounds. Arillotta began stoking the flames of discontent around Springfield as well, traveling with one-time Frankie Sky Ball Scibelli lieutenant, Felix Tranghese to New York City to show Nigro a presentencing report for Delevo underling Emilio Fusco recounting a loose-lipped Bruno having an off-the-cuff conversation with an FBI agent confirming Fusco’s mob induction.

By the end of the summer of 2003, Nigro “made” Arillotta in a ceremony held in a Bronx apartment without Bruno’s knowledge and sanctioned Arillotta to murder his mentor and assume control of the Springfield mob crew himself before he had even turned 40 years old. Arillotta farmed out the murder contract to his main muscle, the Geas brothers (Ty and Freddy), who in turn assigned Frankie Roche, a prison pal of theirs to do the job.

Roche shot Bruno on the eve of his 58th birthday, as he left his weekly Sunday night card game at his Our Lady of Mt. Carmel Social Club headquarters and eventually became a witness for the government. So did Arillotta and Tranghese, but not until Arillotta reigned on the throne for six years, “shelving” Tranghese with a beat down delivered by the Geas brothers at a construction site of his in 2005.

Arillotta and Tranghese each testified against Little Artie Nigro, receiving significantly reduced sentences as a reward for their cooperation. Both have quietly returned to Greater Springfield following their prison terms.

Bruno’s driver, Frank (The Shark) Depergola, present when Big Al was killed, is set to plead guilty to extortion charges this month. The FBI believes Depergola is a player in the current Springfield mob orbit and reports to reputed crew boss Albert (The Animal) Calvanese, who was a target of the 2016 indictment that ensnared Depergola and others, but was able to avoid arrest.

“These guys now are wannabes compared to what used to be around here,” said one local mafia insider. “Nobody outside Springfield gives these clowns the time of day. And a lot of guys in Springfield won’t either. It’s a lightweight city these days in term of organized crime and its being run by a bunch of lightweights.”

*A very special thank you to Springfield’s resident ace mobologist and crime reporter Stephanie Barry for help in crafting the narrative of this article.