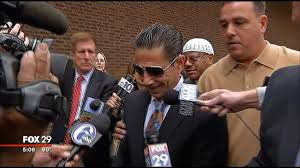 Sidekicks are a staple of the mob.

Those paying close attention to Philadelphia mafia boss Joseph (Skinny Joey) Merlino’s most-recent legal saga – a parole violation over last summer in his newly-adopted stomping grounds of South Florida leading to a four-month prison-stint, which began earlier this week –, might have noticed the rather imposing figure always by his side at court appearances watching his back.

His name is Raymond (Ray Wags) Wagner, he’s a childhood buddy of Skinny Joey’s and he’s been acting as Merlino’s driver and bodyguard whenever he’s in Philly these days (the two are seen together in the feature image of this article).

Wagner, 50, and his baby brother Edward (Eddie Wags) Wagner, 47, are a pair of local bookies and mafia associates, who also happen to be the nephews of Philadelphia mobster Gaeton Lucibello. The Wagners’ mom is Lucibello’s sister. They are prohibited from being inducted into the mafia family Merlino heads due to their half-Irish heritage.

Still, they have respect across the board.

“They can hold their own, they’re nobody’s cronies,” said one member of the local gangland scene. “Those two are tough SOBs and they ain’t dummies. Back when Gaeton had his own crew, they were two of his main guys.”

At one point in time in the past decade, Lucibello, 61, was a powerful capo under the syndicate’s then-acting boss Joseph (Uncle Joe) Ligambi. He’s in the final stretch of a four-year term behind bars tied to a federal racketeering conviction and is scheduled to be released from federal custody next month.

Court documents and FBI records related to Lucibello describe the Wagner brothers as “bookmakers and collectors” for their uncle, as well as helping him look after “LCN interests” in the area’s steel industry.

Eddie Wagner was nabbed on bookmaking charges in 2008. Merlino was away in federal prison from 1999 until 2011 on a RICO bust.

Skinny Joey took the reins of the Philadelphia mob in 1994, alongside Ralph Natale, after winning a street war for underworld supremacy against Sicilian-born Don John Stanfa. The dispute spanned two years and cost both sides of the struggle several lives. Stanfa eventually landed in prison for life on murder charges. Natale was indicted with Merlino in 2000 and became a witness for the government, testifying against his former partner-in-crime in court.

Lucibello aligned with Merlino in South Philly’s 1990s mob war, defecting from Stanfa’s camp at the beginning of the conflict in 1992. Ray and Eddie Wags were standing behind Merlino back then, too.

Both were frequently seen socializing with Skinny Joey and his “young turk” crew during that era and participated in Merlino’s much-publicized holiday-season food giveaways, video footage of which still gets run in the Pennsylvania media today.