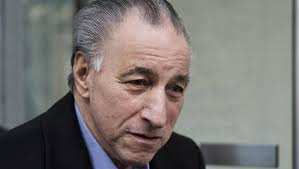 A few excerpts of evidence from the most-recent Philadelphia mafia RICO indictment, filed in 2011 against then-acting boss Joseph(Uncle Joe) Ligambi – seen in featured image – and most of his administration. Ligambi would get off-the-hook with a pair of mistrials, a majority of his alleged lieutenants weren’t so lucky.

Audio surveillance of South Philly hood Gary Battaglini in 2002 berating an indebted gambler that used to bet with current street boss Steven (Handsome Stevie) Mazzone, who at that time was serving a prison bit for a 2001 RICO conviction.

“You’re about to see a side of me you ain’t gonna fucking enjoy, Cause right now I wanna fucking put a bullet in your head. Do you fucking understand me?. Stevie’s in jail, Stevie aint got nothing to do with nothing no more, that book don’t belong to him, they wiped all that stuff off the books…there’s a new boss in town. It’s Uncle Joe’s book and everything gets kicked upstairs to him now. He don’t want to know nothing, he just wants his money. That’s all he wants, his fucking envelope and that’s it.”

Intercepted telephone conversation between Ligambi’s underboss Joseph (Mousie) Massimino and a non-LCN member friend of his in 2003.

Friend: “Hey Mouse, what ya doing the rest of the day? I’ve got my grandson with me, I’m going to be passing by the bar and he wants to meet the underboss

Mousie: “Yeah, I’ll be there, come on by

Mousie Massimino communicating with an underling from state prison in 2006

“Get in touch with him and tell him to tell his mother to tell her husband that he better get me my fucking money. I don’t care who the fuck he owes he better get mine and soon. This motherfucker owes me 35K. I don’t care if he has to rob a bank. He fucking better get me my money. He would of never done that if Joe Crutch (one-time crime family consigliere) was around. He waited for him to die. That bald headed motherfucker…. I’m tired of the stories and all his bullshit. He won’t be able to hide anywhere in the whole fucking United States of America. He’s a cocksucker and he’s dodging me.”

Ligambi’s protégé and Massimino’s replacement as underboss upon his incarceration, Anthony Staino, threatens an undercover FBI agent that had infiltrated his crew and taken out a street loan from him in a conversation that the agent recorded in the bathroom of The Chop House restaurant in 2005.

“No disrespect, but if you fuck with me, you know what’s gonna happen, right? I love you, but I just wanted to put it on the table. Just don’t fuck with me. I want $3,000, plus the principal tomorrow. Please, I like you, I don’t want to have to hurt you. I’m begging you, don’t be stupid.”