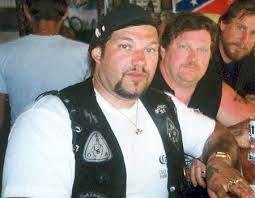 The 58-year old Yager was taken into custody in October at a bar in the Baja region of Mexico (Rosarito) after almost 17 years of eluding authorities. Under initial questioning, he insisted his name was David Dorian before admitting his real identity. He was extradited to San Diego and then transported to Wisconsin right before the holidays where he will face the near two-decade old charges. All 16 of his co-defendants in the case were found guilty at trial.

Margie Jelovic, Yager’s longtime girlfriend who went on the run with him in 1997, was killed the day Yager was apprehended in a high-speed chase with police. They were featured on an episode of the television show Unsolved Mysteries.

Famous for fits of rage in his biker-chief heyday, good ole’ Mad Dog mellowed with age. Since arriving in the city of Rosarito, near Tijuana, in the early 2000s, the pair was known to friends as “Steve and Maggie” and became popular members of the town’s community of American retirees, with Yager earning a reputation as a good neighbor for helping others with landscaping and home repairs free of charge.

Carroll, a one-time Montreal-based Hells Angel and an infamously-feared enforcer in the Canadian underworld, has been avoiding arrest from a 2001 indictment going on 14 years and is believed to be globetrotting, hiding out at different Hells Angels’ safe houses around the world (Gangster Report did a feature on “Wolf” Carroll last month).

The Hells Angels and the Outlaws are mortal enemies. Bowman once placed a murder contract on Hells Angels-founder Ralph (Sonny) Barger, sending underlings of his out to Barger’s home in California to scout a hit.

Like Carroll and Yager, Bowman, a native of Detroit, went on the lam following his indictment. He was finally arrested in June of 1999 at a residence in Sterling Heights, Michigan, turned in by his girlfriend after making the FBI’s 10 Most Wanted List and being hidden by out-of-state chapters of the Outlaws and his contacts in the Italian mafia. Convicted on multiple murder and racketeering counts stemming from the 1997 bust, Bowman is serving life behind bars.

Mad Dog Yager, often referred to as simply, “Mad,” is charged with being one of Bowman’s top lieutenants and the Outlaws’ “Chicago region” or “Windy City region” president, overseeing club activity in the states of Indiana, Wisconsin and Illinois back in the 1990s when he was active.

His arrest jacket dates back to the early 1980s. He’s been previously convicted of a pair of assaults (1984, 1985), – in one of the incidents he attacked a cop in his home base of Gary, Indiana  – and has been suspected of committing arson, murder, attempted murder, gun-running and narcotics trafficking among other felonies. The current indictment runs the gamut.

“He relished the rough stuff” said U.S. Marshal Patrick Amerson of Yager’s rule. “People were afraid of him because they thought he was crazy.”

When the Chicago Outlaws chapter was having trouble dealing with a Hells Angels sub-group known as the Hells Henchmen in 1994, Taco Bowman summoned Yager to his house in the Motor City and personally tapped him to take care of the problem and lead a fire-bombing campaign against the Henchmen. Yager is expected to go to trial by the fall in a Milwaukee federal court.