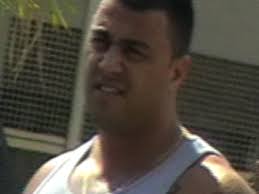 Young and up-and-coming Toronto Mafioso Daniele (Dark Danny) Ranieri has been a fugitive of the law since late last month.

According to the Royal Mounted Canadian Police in a statement to the press last week, the 30-year old, musclebound Ranieri has exited the country stage left, hoping to avoid arrest for a racketeering indictment filed against him in December. The RMCP, part of a task force that has investigated Ranieri for the last year, is telling the public to consider him “armed and dangerous” and are of the opinion that he is most likely hiding in the United States, Mexico, Cuba, Italy or Venezuela. The last sighting of Ranieri was in Havana at Christmas time.

Residing in Bolton, Ontario and listing his employment as a builder on his tax returns, Ranieri is viewed as a fast-riser in Canadian mob circles. December’s indictment, entitled Project Forza (Italian for strength), claims that Dark Danny took over the Montreal mafia’s crew in Toronto almost two years ago upon the gangland-style murder of his mentor and former boss Juan (Joe Bravo) Fernandez in Italy in the spring of 2013. Fernandez  assumed command of the Toronto crew in 2000 following the execution of his predecessor Gaetano (Guy) Panepinto.

First appearing on the radar of Canadian law enforcement as a teenager in 2002, Ranieri has already served three short prison stints (two federal, one province) for robbery, assault, bookmaking and firearm offenses. When he was imprisoned, Ranieri was caught peddling narcotics and had time tacked on to the end of his sentence for threatening a corrections officer.

During one of his bits behind bar, Ranieri met and became friends with Fernandez, a top lieutenant and massively-feared strong arm for Montreal Godfather Vito Rizzuto. Joe Bravo had been in charge of the Toronto area on behalf of the Rizzuto organization until he was deported to his native Spain in 2012. He eventually landed in Palermo, Sicily months later.

Over the final years of Fernandez’s reign in Toronto, the heavily-tattooed and coffee-skinned Dark Danny was his eyes and ears on the streets. Having the reputation for extreme loyalty to Fernandez and the mafia in general, Ranieri famously had “Cosa Nostra” tatted across his chest. Joe Bravo was intercepted on tape telling other higher-ups in the Montreal mob that he wanted to propose Ranieri for membership in the crime syndicate.

The unabashed loyalty Ranieri afforded Fernandez actually alerted Sicilian police to Fernandez’s whereabouts in Palermo. Dark Danny’s visit to Sicily in July 2012 allowed the cops to pinpoint Joe Bravo’s exact location, as a surveillance squad followed Ranieri from the airport to where he met up with his boss at the Hotel Da Franco Il Conte in the town of Bagheria. Palermo’s anti-m

afia unit was tipped off to Ranieri’s pending arrival by the task force in Canada.

Opening a pizza parlor in Bagheria, called, what else, but Bravo Pizzeria, Fernandez headquartered his operations there and began dabbling in the local rackets and smuggling drugs. Sharing proceeds with the Sicilian mob, he bragged that despite his Spanish heritage he had been “made” into the mafia by Rizzuto, alongside his and Rizzuto’s then-confidant and de-facto underboss, Raynald Desjardins, who was of French-Canadian descent.

“Vito made me and Raynald,” he explained to an associate on a Sicilian wiretap. “I sit at the right hand of God, that’s how close I am to him….Vito’s the boss and the boss makes the fucking rules.”

The execution of Fernandez and his Canadian expat bodyguard in April 2013 is suspected by authorities to be linked to the multi-year mob war that raged in and around Montreal from 2009 until just recently and left more than a dozen dead bodies in its wake.

While incarcerated in an American prison for his role in the notorious “Three Capos Murders” (the purging of three dissident leaders of the fractured Bonanno clan in New York City back in the 1980s), Rizzuto’s empire and personal family came under attack by a rebel faction of his crime family spearheaded by Desjardins and deported Bonanno boss Salvatore (Sal the Ironworker) Montagna. Rizzuto’s father, son and brother-in-law were all slain in the conflict and when he returned to Montreal in the fall of 2012, he began firing back at his rivals, ordering a string of retaliatory strikes.

Rizzuto died of cancer in December 2013. Desjardins averted Rizzuto’s wrath because he’s in jail himself after his alliance with the overly-ambitious Montagna fell apart and according to prosecutors, resulted in Desjardins arranging Montagna’s November 2011 assassination – a crime he and five co-defendants are awaiting trial for.

Even though he was thousands of miles away on a different continent, Joe Bravo was still smack dab in the center of the bloody dispute. And probably a casualty of it, a murder that may have been ordered by Rizzuto for Fernandez’s wavering.

“I know both sides ya know, I’m stuck in the middle between these two guys,” Joe Bravo was heard complaining on another wiretap.

Three Montreal mobsters, the Scaduto brothers (Pete and Sam) and Joe Carbone, have been charged with the slayings of Joe Bravo and his driver and imported-muscle Fernando Pimentel (born in Portugal, grew up in Ontario). Fernandez and Pimentel were lured to a purported drug buy at the Scadutos’ estate, shot to death and set on fire.

Sicilian police and RCMP officials believe the Scadutos and Carbone were part of Joe Bravo’s freshly-formed crew in Palermo and got word from back home that he had to go. Pete Scaduto made headlines in 2004 for botching a mob hit back in Toronto that left an unintended bystander paralyzed.

Dark Danny Ranieri’s trip to see Fernandez in the summer of 2012, some three months leading up to Rizzuto being sprung from prison, was to warn him of Rizzuto’s displeasure with his lack of support, per his indictment. Joe Bravo allegedly sent back word to Rizzuto that he was upset because money that the syndicate had been sending him in Palermo was discontinued.

Besides Ranieri, the December-levied indictment named six other co-defendants in the racketeering conspiracy, charging extortion, arson, fraud, gun-running and drug dealing. Ranieri’s reputed primary street collector Lucas Day is on the lamb, too