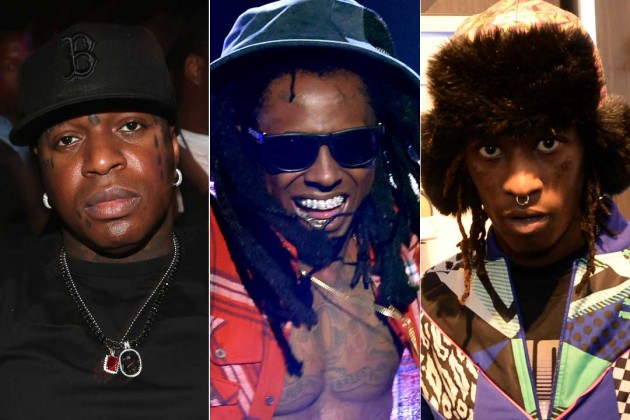 Lil Wayne has had a hit put out on his life. Birdman and Young Thug are accused of conspiring to kill the Free Weezy Album creator, according to an indictment filed in Cobb County, Ga. last month.

Apparently when Weezy’s tour bus was shot up in April, the man behind the shooting plotted with Birdman and Young Thug to kill him, reports The Atlanta Journal-Constitution. Twenty-five-year-old Jimmy Carlton Winfrey was arrested on June 2 in connection with the shooting, an act he carried out to gain street cred with the Bloods Gang, a police warrant states. All three rappers are also listed as being members of the gang.

Winfrey, who also goes by the names “Pee Wee” and “Roscoe,” is charged with aggravated assault, terroristic threats and acts, criminal damage, possession of a firearm by a felon, criminal gang activity, reckless conduct and discharging a weapon near the street as a result of the tour bus shooting, in which he caused $20,000 worth of damage. No one on the bus was injured.

The Cash Money Records head honcho and Thugger were named in the indictment as being involved in a RICO conspiracy along with Winfrey. However, neither Rich Gang members have been charged with any wrongdoing in this incident. But Thug is currently in jail as a result of another matter. He was arrested Wednesday (July 15) for making terroristic threats after allegedly threatening to shoot a mall security guard in the face.

Mike Petchenik of WSB-TV Atlanta offered details on the indictment via Twitter that include the video for Thug’s “Halftime” being used as evidence. “Prosectors cite #YoungThug music video for #HalfTime showing Winfrey with assault rifle, lyrics about #LilWayne as evidence. #wsbtv,” he wrote.

The news of a plot to kill Lil Wayne comes just days after he was performing at Club LIV in Miami and Birdman and his entourage were reportedly throwing water bottles at him while he was onstage.