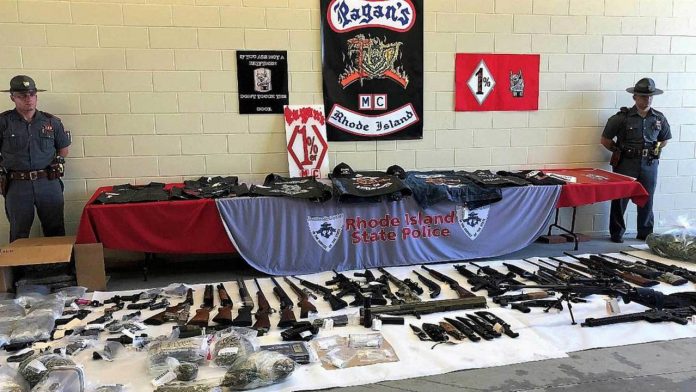 February 7, 2022 — Reputed Providence Pagan’s Motorcycle Club boss Deric (Big Tuna) McGuire is back behind bars for a month and a half on a bond violation stemming from his attendance at the club’s grand opening of the club’s new headquarters in Cumberland, Rhode Island last November. The Big Tuna had been free on a $100,00 surety bond order. He’s staring at more than 200 drug and weapons counts in the Operation Patched Out case,

The 37-year old McGuire, who is restricted to home confinement, was caught consorting with fellow Pagan’s from the Providence area and glad-handing with club dignitaries coming into town from New York, New Jersey and Pennsylvania for the event. He arrived at the celebration on his girlfriend’s Harley-Davidson bike. Just three weeks ago, McGuire held a Pagan’s MC meeting at his home in North Smithfield, per court records.

Rhode Island Superior Court Judge Netti Vogel ruled wiretapped phone conversations between McGuire and Pagan’s leadership in New York inadmissible because of a faulty state-police warrant. Originally denied bond in the case, the Big Tuna spent 14 months in jail before Judge Vogel sprang him in 2019 to await trial from home. Prosecutors have appealed Vogel’s decision to the state Supreme Cour

During the investigation, conversations between McGuire and the Pagan’s then-national president Keith (Conan the Barbarian) Richter discussing Richter’s desire for the Pagan’s to take over the entire east coast biker scene and him tapping McGuire personally to head his expansion into the Providence area.

According to the Operation Patch Out indictment that landed in 2018, McGuire traveled to see Richter in Elizabeth, New Jersey with his Thug Riders biker gang in 2017 and they were subsequently all “patched over” to the Pagan’s. On the group’s return to Rhode Island, McGuire opened up the first Pagan’s chapter in the state in the town of Woonsocket. The long-haired, muscle-bound and magnetic Richter is based out of Long Island, New York and one of the nation’s most powerful and feared biker bosses.

Richter, 62, utilized McGuire and his Rhode Island Pagan’s posse in the early parts of his greater “Blue Mandate” expansion campaign to strengthen the Pagan’s brand nationally and gobble up turf coast to coast with a series of alliances and smaller-club acquisitions. Last summer, Richter reported to federal prison to serve three years for illegal gun possession.