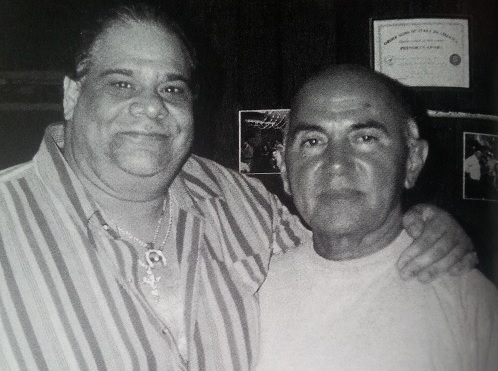 February 7, 2022 — In the months after he cut a deal with the FBI to cooperate and become the first American mafia boss to testify on behalf of the U.S. government, Ralph Natale was caught multiple times on an FBI wire throughout the winter of 2000 advising a former lieutenant on his plot to murder his way to the top of the Philadelphia mob’s Bruno-Scarfo crime family. According to sources with intimate knowledge of the situation, Natale’s scheming was excused and didn’t cost him his deal with the government because the man Uncle Sam needed him to convict was too important. It happened to be the same man Natale was trying to help overthrow.

That man is reputed current Philadelphia mob don Joseph (Skinny Joey) Merlino, Natale’s successor and one-time protege turned enemy. The pair took power in the Bruno-Scarfo crime family together in the mid 1990s, but by the end of the decade, the young-gun Merlino and his tight-knit crew of childhood friends and mob-soldier loyalists pushed Natale out of the power and scurrying to the feds.

While in protective custody, Natale plotted with the Philly mob’s Newark captain, Pete (The Crumb) Caprio and a bookmaker confidant of his named Daniel (Danny D) D’Ambrosia to eliminate the Merlino faction of the family by killing his acting boss, underboss and consigliere in a coup being sponsored by New York’s Lucchese and Gambino crime families to hoist Caprio into the boss’ chair, per FBI wire transcripts and first-hand recollections of the failed power play. On the verge of Caprio and D’Ambrosia pulling the trigger on the plan, Pete the Crumb was indicted by the feds and flipped to Team USA in March 2000.

The polished, affable and yet quite lethal 86-year old Natale died recently of natural causes living out his final years in New Jersey. He ran the Philly mafia from 1994 until he made his pact with the FBI to testify against Skinny Joey and his cohorts in the fall of 1999 on the heels of a narcotics-trafficking pinch.

Natale was jailed in 1998 on a parole violation and almost immediately began to be phased out of crime family affairs by the Merlino crew due to growing animosities and a breakdown of trust with the organization’s youth movement. He admitted to ordering or committing a dozen gangland hits and dispatching Merlino and his boys on numerous assignments that included murder and extortion.

Natale made a name for himself in the east coast underworld of the 1960s and 1970s as Philadelphia Godfather Angelo Bruno’s personal enforcer and labor union emissary. Imprisoned for drug dealing, arson and insurance fraud in 1979, Natale’s removal from the streets left Bruno exposed and the so-called “Docile Don” was assassinated in March 1980. In the late 1980s, Natale became cell mates with a then 28-year old Merlino, who was sent to federal prison for an armored car heist and needed backing from an old-school mob figure like Natale to seize control of the Philly mob for himself.

Merlino’s dad “Chucky” was the underboss of the Bruno-Scarfo crime family in the wild Nicodemo (Little Nicky) Scarfo days following Bruno’s murder. Upon Scarfo and the elder Merlino getting locked up for racketeering, Sicilian-born John Stanfa was installed as boss of the Philly mafia by order of the Gambino crime family in New York. Merlino and Natale forged an alliance behind bars in order to knock Stanfa off the throne, leading to Natale politicking with his connections within the Five Families in the Big Apple to secure a blessing and Merlino and his fearless band of street-corner pals going to war with Stanfa in a bloody conflict that left bodies on both sides in its wake.

When Stanfa was incarcerated in a racketeering and murder case in the spring of 1994, Natale and Merlino declared victory. Natale emerged from prison months later and named himself boss and Merlino underboss of the Bruno-Scarfo crime family. In 1996, Natale promoted “Pete the Crumb” Caprio, a veteran Garden State gangster going back to Natale’s days with Bruno, and made him capo of North Jersey after Caprio had killed his predecessor being disloyal to the Natale and Merlino regime. Natale even threw Caprio a party to celebrated his promotion.

So upon things going sour with Merlino in subsequent years, Natale felt comfortable turning to Caprio for help. Even after he had agreed to turn state’s witness. What exactly Caprio knew or didn’t know related to Natale’s cooperation is unknown. What is known is that after Natale was for all intents and purposes deposed and decided to aid the FBI in building a case against Skinny Joey, he was having phone conversations from protective custody with Caprio and sending messages and back and forth to him through “Danny D” D’Amrosia regarding Caprio grabbing power from the Merlino crew by carrying out the triple homicide of the then-jailed Merlino’s acting boss Joseph (Uncle Joe) Ligambi, underboss Steven (Handsome Stevie) Mazzone and consigliere George (Ge

According to federal records and Caprio own debriefing documents, Ligambi, Mazzone and Borgesi were going to be lured to a meeting at a New Jersey warehouse, slaughtered and then buried in a nearby landfill. The Luccheses and Gambinos would support Caprio as the new boss of the Philadelphia mafia, Caprio would induct D’Ambrosia into the Bruno-Scarfo crime family and make him his underboss and they would reach out to the remaining Merlino faction members and appoint one of them consigliere, per the records. Natale worked the New York mafia angle on behalf of Caprio, per sources, networking for the already well-connected Pete the Crumb with Lucchese and Gambino leaders unaware of his cooperation status with the FBI.

Natale and Caprio both took the stand against Merlino, Mazzone and Borgesi at a splashy 2001 trial where they were all found guilty on racketeering counts but not the murder charges. At the end of the day, despite his testimony, Natale did more prison time (15 years) than any of the men he helped convict.

Merlino, 59, did 12 years in prison, walking free in March 2011 and relocating to Boca Raton, Florida. Natale came out of prison in 2013 and wrote a book, Last Don Standing with Larry McShane and Dan Pearson.

One former FBI agent claims the FBI and U.S. Attorneys Office desired to slam Natale hard in his sentencing as payback for not delivering a knockout blow to Merlino and catching him actively participating in a mafia murder conspiracy while he was in a cooperation deal with the government and helping them craft its case against the Merlino regime.

“The Bureau, the prosecutors, nobody was happy with the results of Ralph’s cooperation, especially after everyone looked the other way on his conspiring with Pete the Crumb,” the retired G-Man said. “His testimony made a small dent, it wasn’t a death blow. With all of that baggage, he just wasn’t going to get a sweetheart sentence, he wasn’t getting any favors done for him. People I worked with liked Ralph, he was a likable guy. But sometimes he was just too smart for his own good.”

Caprio would be 93 if he’s still alive. He popped back on the radar as a witness against “Uncle Joe” Ligambi at a pair of racketeering trials in 2012 and 2013, respectively, that failed to do the mob elder statesman any harm.

D’Ambrosia’s father allegedly paid Ligambi a six-figure amount to keep the Merlino faction from taking retribution on Danny D, according to multiple sources. The 58-year old D’Ambrosia aligned with the Gambinos for protection after a prison term and took a pinch for wire fraud and tax evasion two years ago.

Ligambi, 82, headed the day-to-day machinations of the Philly mob as Merlino’s acting boss from 1999 all the way through his retirement in 2019. Uncle Joe had a chat with Gambino leaders inside a New Jersey restaurant in 2010 that was recorded by an informant at the table and heard Ligambi complaining to the Gambinos for having to deal with Danny D’s begging dad and how he told him to get lost.