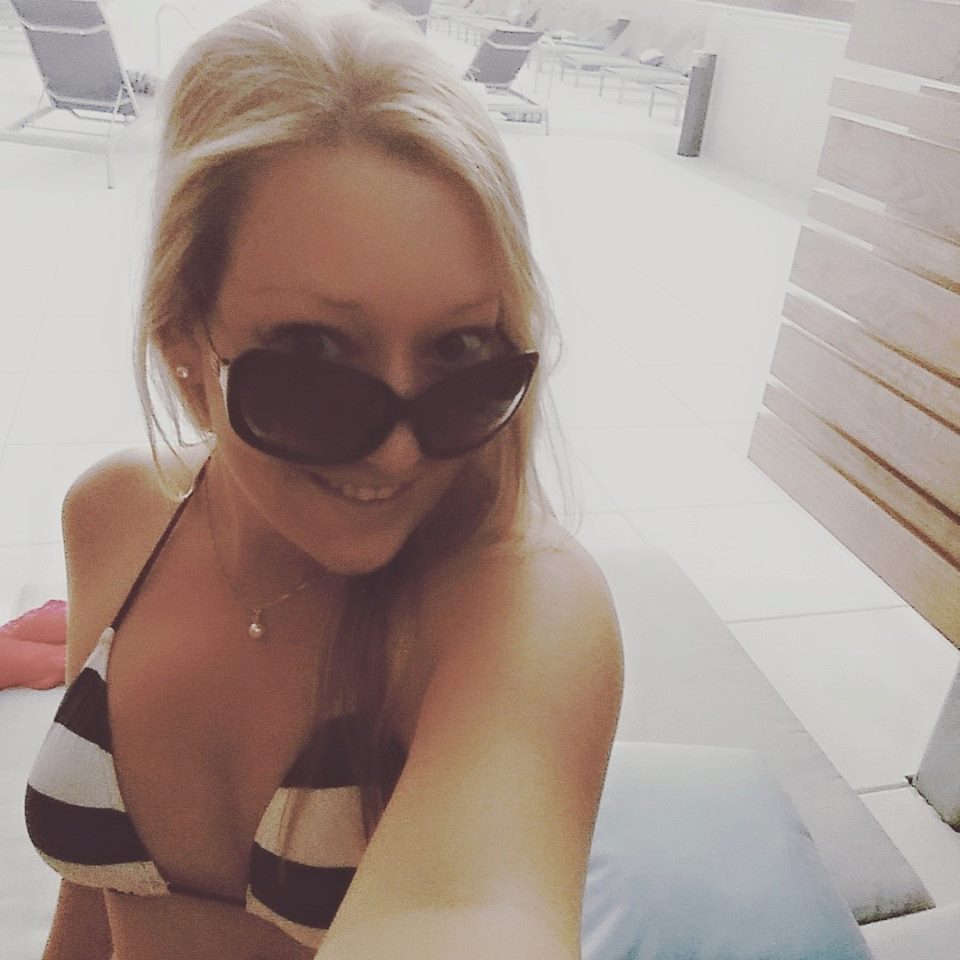 The past decade has played out like a real-life version of the film Goodfellas for Chicago mob wife Jillian Hollingshead, with Hollingshead cast as the female lead, a modern-day Karen Hill (portrayed in the classic gangster movie by Lorraine Bracco in an Oscar-nominated role), but sporting considerable more spunk and street savvy. The beautiful and vivacious 29-year old is in hiding after her and her husband both turned witness-for-the-government against the Windy City mafia and helped the FBI and Cook County Sherriff’s Department bring down a well-earning faction of the Outfit’s storied Westside crew, sometimes called the Grand Avenue crew.

Jeff Hollingshead, 49, and a former lieutenant working directly under reputed Westside captain Albert (Albie the Falcon) Vena, is currently in prison facing 40 years on kidnapping and racketeering charges. Half-Italian and half-German with a history in the trucking industry and as a seasoned strong-arm, Jeff is a first cousin to Vena’s alleged second-in-command, Christopher (Christy the Nose) Spina. Him and his wife combined forces in late 2013, jumping ship in the Chicago mob and joining Team U.S.A. Their cooperation and testimony in front of the grand jury spearheaded the July 2014 racketeering indictment of Vena’s No. 3-in-charge and de-facto “chief of staff,” Robert (Bobby Pinocchio) Panozzo and his gangland running buddy Paul (Big Paulie) Koroluk, both currently incarcerated awaiting trial.

Sources in Illinois law enforcement feel Jillian Hollingshead’s life may be in danger and have expressed this concern to her in a number of face-to-face meetings. Newly-acquired federal records and sources once close to the couple shed fresh light on who exactly Jillian Hollingshead is and how her relationship with her husband and life in the inner sanctum of the mafia unfolded:

Jillian Hollingshead was born Jillian Archer and raised on the rugged Southside of Chicago. Her family moved to suburban Plainfield where she attended high school. Following graduation in 2004, she began taking college classes, studying to be a teacher, and rented an apartment in Wrigleyville, the party-fueled neighborhood surrounding historic Wrigley Field, home to Major League Baseball’s Chicago Cubs.

A year into her education, Archer, then 19, started dating the 20 years her senior, Jeff Hollingshead, an imposing and respected Outfit associate long linked to the Grand Avenue gang, a wing of the Midwest crime syndicate which was undergoing a leadership change at that point in time. The pair met at the Green Mill Tavern in the spring of 2005, right when the crew’s aging overlord Joseph (Joey the Clown) Lombardo was going on the run from the massive Operation Family Secrets bust (he’d eventually be caught and convicted). Vena took his place as the new Godfather of Grand Avenue and Jeff, Bobby Panozzo and Christy Spina became Vena’s most-trusted soldiers, advisors and main conduits to the street.

This was the milieu Jillian Archer was entering when she began a whirlwind romance with Jeff Hollingshead, the fast-rising Outfit power with a cemented reputation as a valued thief, debt collector and labor-union racketeer. In a matter of days, Archer went from intently studying for exams to parading around Chitown’s most expensive restaurants and poshest nightclub hotspots with the city’s mafia elite, frequently flying first class across the country on her husband’s arm as he went around taking care of Outfit business. Instead of traveling to school by elevated train, she was now being chauffeured in a limousine arranged by Hollingshead through one of his Westside crew contacts (a limo service owner working off a gambling debt provided the chauffer service free of charge).

During the time Jeff paired up with Jillian in 2005, he was legally separated from his first wife. By 2006, he was divorced and he and Jillian were engaged and living together in a Wrigleyville apartment building he owned a piece of. At first, Jillian thought Jeff was a legitimate businessman. His glass manufacturing business in Las Vegas explained his constant need to travel and why he would sometimes be gone for weeks on end. It didn’t take long though for Jeff to come clean and to tell his future bride Jillian what he really did for a living. She hardly blinked and jumped on board for the ride.

And what a crazy, opulent and ultimately dangerous ride it was.

Jillian dropped out of school. Jeff bought her a candy apple red-colored Mustang and showered her with gifts, some like bags filled of designer clothes, purses and shoes he and his mobster pals hijacked using his ties to the Teamsters union. They purchased a cottage in upstate Galena, Illinois, near the Wisconsin border and vacationed there often, as well as out in Vegas, down in Florida or on the beach in Mexico. If Jeff had to leave town for business, Jillian was looked after by his cousin, Christy the Nose Spina and Spina’s brother Johnny, Jeff’s partner in a truck-leasing firm, provided spending cash, a driver and overall protection from harm.

The couple married in 2009 – celebrating with a pair of weddings, one in Illinois, one in Cabo San Lucas –, had a baby daughter and moved to a nicely-manicured home in ritzy suburban Wilmette, on the heels of a multi-month post-honeymoon stay at the very select Drake Hotel in downtown Chicago right off Lake Michigan at the northern most point of the world-famous Magnificent Mile. According to FBI surveillance logs, Jillian accompanied Jeff to meals and on trips to Las Vegas with Chicago mob superpowers such as Albie the Falcon Vena, former acting boss Michael (Fat Mike) Sarno and current Outfit don John (Johnny No Nose) DiFronzo, said to be in semi-retirement. Cook County Sherriff’s Department documents show Vena and Sarno were silent partners in Jeff’s glass company in Vegas.

Sarno is serving 25 years in prison on a racketeering conviction. The elderly DiFronzo accidentally backed his sports utility vehicle into Jillian’s car, causing damage, at one of the dinners she attended, per an FB

I filing. That same FBI filing reveals an incident in Las Vegas at Rain nightclub inside The Palms Hotel and Casino in 2012 where Jillian was in the VIP lounge alongside Jeff, Vena and Bobby Panozzo and Jeff got into a physical altercation, pummeling another patron for making a lewd remark to her, at which point, police were called and nightclub personnel ushered the Grand Avenue crew mafia entourage into a secret quarters of the kitchen (served champagne and caviar while cops scoured the premises) to avoid detection.

Jeff was nailed on home invasion and kidnapping charges in 2009. He made bail and was free until the end of 2013 when he was locked up on a bond violation. Panozzo’s decision to rob his house of all cash and jewelry – using Big Paulie Koroluk as his “entry man” – and simultaneously make a romantic play for Jillian, literally within hours of him being put behind bars, sent the Hollingsheads running to the feds.

Jillian’s retrieval of an alleged “witness hit list” in the Mustang she got as her engagement present, a piece of paper Jeff was handed by his attorney and notorious Chicago mob mouthpiece Joe Lopez with instructions to “give to this Bobby, he’ll know what to do with it,” gave them leverage. In exchange for the list which had been in Panozzo’s possession until he inadvertently turned it over to Jillian and her keeping tabs on the Outfit’s Westsiders for the government, the Illinois State’s Attorney agreed to return a BMW of hers that was confiscated after a DUI arrest.

Both Hollingsheads testified in front of a federal grand jury probing Grand Avenue crew affairs, most pressingly 56-year old Panozzo’s robbery and drug-dealing operations, and aided the government in setting up Panozzo and Koruluk in a sting last summer, seeing the wiseguy duo arrested red-handed departing what they believed to be a narcotics stash house they had just ripped off. The forthcoming racketeering indictment included robber, kidnapping, narcotics trafficking, arson, prostitution, insurance fraud and attempted murder connected to the witness hit list (Lopez denies any wrongdoing).

“That girl wasn’t your typical know-nothing mob wife,” one source inside the Cook County Sherriff’s Department. “She was a real firecracker, unafraid to speak her mind. She was privy to more things in that Grand Avenue crew than most or any other females in her position. People said they treated her like one of the fellas. I’m sure some of those guys are worried about what she knows and what she can jam them with if she ever takes the stand against them.”

In their grand jury testimony, per sources, the Hollingsheads provided information on three possible gangland murders involving the Outfit’s Westside branch: an elderly woman and friend of Panozzo’s Jeff told investigators Panozzo killed in the 1980s after having them sign over real estate property and other assets to him and the 2010 slaying of reputed Chicago mob associate and drug pusher Norberto Velez.

The 31-year old Velez, a Grand Avenue crew crony and sometimes thief-and-enforcer believed to be patrolling the Northside for the Albie Vena contingent, according to police records, lived in the same building in Wrigleyville Jeff and Jillian did and was executed in a building hallway on Thanksgiving five years ago. Informants told police at the time of Velez’s death, that he owed higher-ups in the Grand Avenue crew money from a loan and he wasn’t repaying it. Velez had worked as a bouncer at the popular Cubby Bear bar, located right behind Wrigley Field.

While once being home to its own mob crew, Chicago’s Northside of the city has since been rolled into the Westside-stationed Grand Avenue regime. The north suburbs now fall under the auspice of the Cicero crew.

Vena, 66, and a man dubbed the most feared man in the Windy City by multiple local media outlets, has deep ties on the Northside dating back to the 1970s and 80s when he would often serve as a go-between for Outfit “fixer” and pseudo administrator Gus (Slim) Alex and his Northside contacts in the now-disbanded and mostly-Jewish Rogers Park crew ran by Lenny Patrick (died in witness protection). As reported exclusively here at Gangster Report in recent weeks, Vena is the target of a top-priority federal criminal investigation involving several law enforcement agencies working in coordination with each other, an inquiry the feds are pressuring the Hollingsheads to fully cooperate in and not yet succeeding, per sources extremely close to the situation.

Jillian, according to one source who knows her personally, was particularly chummy with Vena, who beat first-degree homicide charges at trial in the 1990s.

“Albie treated her like a daughter,” the source said. “Jill parties like a wiseguy. He (Albie) liked that, the whole crew became protective of her, not just Albie. You could tell Ablie looked at her different than most of the gals in that same world. He’d always instruct Jeff to bring her along, ya know, whether it was wife or girlfriend night. ”

There have been rumors in recent months that Jillian, living in an undisclosed locale and trying to make ends meat for her and her 5-year old daughter, is thinking of starting a clothing or lingerie line. Jeff is in protective custody in an undisclosed correctional facility.