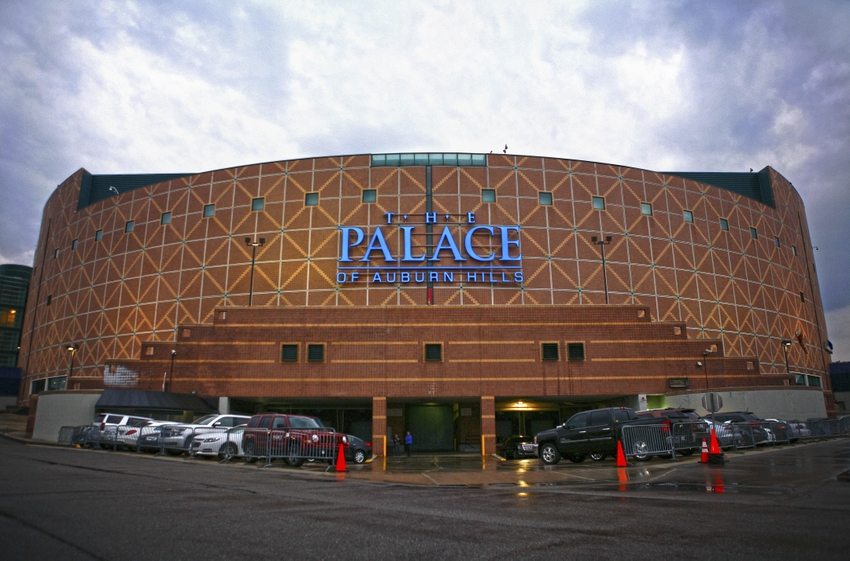 The Palace of Auburn Hills’ legacy could contain point shaving on pro basketball games. The FBI investigated claims of shaving points by members of the NBA’s Detroit Pistons at the height of the franchise’s famed “Bad Boys” glory era but never brought any charges. One of the games probed for point shaving took place at the Palace in December 1989.

The Pistons played their last game at the Palace this week after a near three-decade residency in the once state-of-the-art building, losing to the Washington Wizards 105-101 They’ll move to the newly-constructed Little Caesars Arena in the fall to begin the 2018 season.

According to federal informants, two starters on the Pistons’ back-to-back world championship squads of 1989 and 1990, one being the greatest player in franchise history, Hall of Fame point guard Isiah Thomas, manipulated point spreads for mobsters. The severely-damning allegations failed to ever be substantiated.

“We looked into it,” a former FBI agent said. “Some investigators bought into the point shaving narrative, others didn’t. There was a little smoke there, we never found a full-on fire though, so we moved on (to other aspects of the investigation). The Pistons players themselves weren’t our focus. They were rubbing elbows with a few of the guys that were our focus though and got pulled into the fray that way. When people make those type of assertions, you have to check it out, run it up the flagpole. (Going after point shaving) wasn’t the priority, (going after) the mob was.”

Never a personal target of the criminal probe himself, Thomas was called in front a federal grand jury investigating Italian mafia activity in the Detroit area in 1990 to account for hundreds of thousands of dollars of suspicious check-cashing activity he did at a friend and convicted mob associate’s Southeastern Michigan grocery store chain. Thomas testified that the close to a half-million dollars in checks cashed in a six-month period in 1989 were for his wife’s weekly allowance.

Within months, a federal racketeering indictment dropped charging high-ranking Detroit mob figures Vito (Billy Jack) Giacalone and Jack (Jackie the Kid) Giacalone, their top gambling lieutenants, Allen (The General) Hilf and Freddy (The Saint) Salem, Thomas’ buddy and next-door neighbor, Emmet Denha and others. Everyone wound up pleading guilty in the case. Also included in the bust was New York wiseguy Joey Costa, a reputed soldier in the Gambino crime family who acted as the Motor City crew’s “layoff bank” for their bookmaking activities. Costa, Salem, Hilf and the Giacalones each did two years in prison.

Billy Giacalone and his older brother Anthony (Tony Jack) Giacalone were the faces of the Detroit mafia in the second half of the 20th Century. Tony Giacalone died of cancer in 2001 awaiting trial in a federal racketeering case. Billy Jack climbed to the Tocco-Zerilli crime family’s underboss slot before he died of natural causes in 2012.

The 67-year old Jackie Giacalone, Billy Jack’s oldest son, was a soldier in the crime family at the time of the May 1991 bust and according to sources has since ascended from capo to street boss and then finally to the boss’ chair in 2014. The Jewish Hilf and the Lebanese Salem ran the Giacalone crew’s gambling affairs out of their Capital Street Social Club in Oak Park, Michigan, just a few blocks north of the Detroit city limits. Salem died of dementia in 2009. Hilf, the younger Giacalone’s best friend and main advisor, was felled by kidney failure in the winter of 2014.

Per FBI and court files, in the 1980s, Hilf and Salem would host semi-regular casino nights at the well-manicured estates of Motown pro athletes like Isiah Thomas and world boxing champion Tommy (The Hitman) Hearns. The roving backdoor gambling parlors were for high-rollers only and attracted a diverse clientele, drawing lawyers, doctors and local celebrities and an array of Goodfellas, gangsters, swaggering street hustlers and flashy drug dealers. Several members of the Detroit Pistons attended these casino nights and routinely wagered large sums of money shooting dice, according to federal informants.

Thomas and teammate James Edwards, a well-liked journeyman NBA big fella, lost hundreds of thousands of bucks to the mob in those dice games, per these sources, and agreed to shave points for Hilf, Salem and Giacalones as a means of clearing their respective half-million dollars debt. The informants pointed to a pair of games early in the Pistons’ 1989-1990 season as to when the point shaving occurred – a December 16, 1989 road contest at Golden State and a December 29, 1989 home affair against the Milwaukee Bucks.

The night of the Golden State game, Thomas pulled himself from the lineup just minutes prior to tipoff, which wasn’t enough time for handicappers in Las Vegas to alter the betting line and the Pistons failed to cover the three-point spread., losing by 12 Back in Detroit at the Palace two weeks later, the Pistons were 10-point favorites versus the Bucks and lost by 14 courtesy of a late collapse with Thomas having one of the worst efforts of his pro career (he had a mere 2 points and 2 assists in the game).

Both Thomas and Edwards have always steadfastly denied the point-shaving allegations. Edwards, nicknamed “Buddha” for his Fu-Manchu-style facial hair, had 17 points in the Milwaukee game, however just put in four points in the Golden State contest weeks earlier. Before being traded to the Pistons from the Phoenix Suns in 1988, Edwards was swept up in a drug and gambling scandal surrounding the Suns team in 1986 and 1987 resulting in a criminal indictment out Arizona.

Thomas’ childhood best friend and Pistons teammate Mark Aguirre became so worried about Thomas’ gambling habit and mafia links during the 1990 campaign, he arranged to meet with the FBI to discuss the issue in the middle of the squad’s playoff run en route to a second straight NBA crown. According to federal records, Aguirre met a pair of FBI agents for lunch at Deli Unique in West Bloomfield, Michigan on his way to the Palace for Game 5 of the Eastern Conference Finals against Michael Jordan and his Chicago Bulls.

The two games in question in December 1989 was a topic of conversations for the club in the locker room and at a New Year’s Eve party, per these reports citing unnamed players present, with Thomas and Edwards eventually being confronted by teammates regarding their concerns. Edwards, the team’s starting power forward in 1990, was shipped to the L.A. Clippers at the end of the 1991 season.

The FBI and IRS first came across Thomas’ name in a 1989 audit of his close friend Emmet Denha, an Iraqi immigrant and successful Metro Detroit businessman who lived next door to Thomas in swanky Bloomfield Hills, was named Godfather to Thomas’ son and enjoyed the company of Italian mobsters. Denha was one of the lower-level targets of a federal inquiry into mafia activity in Michigan and Thomas cashed over $400,000 worth of checks, believed at first glance to be gambling proceeds, through Denha’s grocery store chain. Three years later, Denha copped to helping Billy and Jackie Giacalone wash more than $7,000,000 through the same chain and did a year in prison.

The day after the Pistons captured their second world title in a row on the road in Portland against the Portland Trailblazers in June 1990, the then-CBS television affiliate WJBK Channel 2, broke the news of Thomas being subpoenaed to appear before a grand jury investigating a Giacalone-crew led gambling ring. Moments after landing back in Detroit to celebrate his Pistons’ championship, Thomas got into a physical altercation with a reporter trying to interview him about the subpoena at the airport.

The NBA opened an investigation into Thomas’ alleged ties to the mob and the claims that he and Edwards shaved points for the mafia, however, closed the inquiry within months and decided to pursue any actions against the players in question. Allen Hilf and Jackie Giacalone had their names surface in a FBI and NCAA probe of point shaving in the University of the Toledo’s football and basketball programs in the early 2000s, but again like in the 1990s, no charges were ever filed against them.

Two other Motown wiseguys didn’t fare nearly as well as Hilf and Giacalone did. Detroit mob associates Mitchell (Steady Eddie) Karam and Gary (The Cigarette) Manni would go on to plead guilty to paying Toledo athletes to shave points. Karam and Manni are of Iraqi descent.

In the 1980s and early 1990s, Hilf could be found sitting courtside at most Pistons home games, first at the Silverdome and then down the road at the Palace, when it opened its doors in August 1988. Sources told the FBI that he had various Pistons’ timekeepers on his payroll to help him rig outcomes of NBA games during that period. For decades up until his death three years ago, Hilf was one of the most prolific bookies in the country.

The Pistons called the Palace home for 29 seasons, posting three NBA title banners, the two by the Isiah Thomas-captained Bad Boys and one in 2004 in the “Going To Work” era of the franchise headlined by the backcourt of “Mr. Big Shot” Chauncey Billups and Richard “Rip” Hamilton. Billups, Thomas and Edwards were on hand Monday night at the Pistons-Wizards game that brought the curtain down on the organization’s Palace reign.

Thomas retired as a Piston in 1994. Edwards played until 1996, hanging up his sneakers after earning another NBA championship ring, along with former Bad Boys Dennis Rodman and John Salley, with Jordan and the Bulls. Rodman and Salley were each in attendance at the Pistons’ final game at the Palace Monday. Hamilton and Billups retired in 2013 and 2014, respectively.