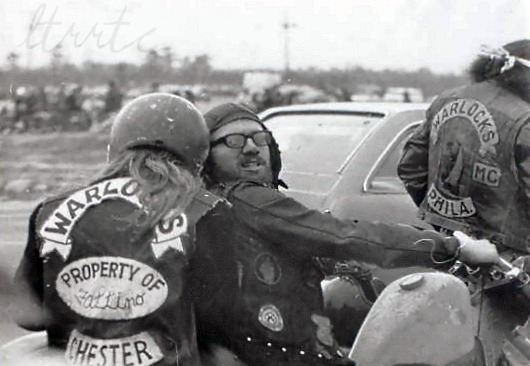 The ranks of the “easy riders” in the City of Brotherly Love absorbed a blow this week as Philadelphia biker world strong arm Andrew (Raggedy Andy) Carr, an enforcer and drug lieutenant for the Warlocks Motorcycle Club’s Chester, Pennsylvania chapter was hit with an 11-year federal prison sentence for his participation in a narcotics trafficking conspiracy. Carr, 60, was a pusher and collector in the near $50,000 per month crystal meth ring brought down in May 2014. He was found guilty at a jury trial last spring.

The Warlocks were founded in Philly in 1967. Between 2000 and 2012, Carr was the athletic director at the Upper Darby Township Recreational Center, coaching boxing and coordinating Police Athletic League programs. Bobby (Mudman) Simon, the Warlocks’ first-ever national president, hailed from Upper Darby. Simon was slain in a prison fight 18 years ago.

The club’s most-recent meth case covered activity spanning the summer of 2013 through the spring of 2014. Carr’s Warlocks brothers, Andre Trombetta and Lamar Behlin, went down in the case as well. Trombetta, like Carr, sold dope and did muscle work at the same time. Chester is located in Delaware County and sits right in the middle between Philadelphia and Wilmington, Delaware.