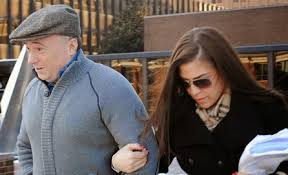 Borgesi, the one-time head of operations in Delaware County, Pennsylvania for the Philadelphia mafia, wants to reestablish a foothold in his former stomping grounds, according to sources on the street and in law enforcement.

Since his release from a 13-year prison sentence on racketeering charges from the 1990s earlier this year, following a second hung jury on more charges levied while he was still locked up , Georgie Boy has been sending “feelers” out to people in the South Philly underworld, including a number of his former gangland running buddies, like Street Boss Steven (Handsome Stevie) Mazzone, per sources, attempting to get the okay to take back rackets in Delaware County.

There’s only one problem: Delaware County, according to court documents and federal files, is alleged to currently belong to Mazzone’s underboss John (Johnny Chang) Ciancagalini. The repeated requests by Borgesi to be allowed to edge Johnny Chang out of his post have fallen on deaf hears, per these sources, and he’s been told by intermediaries to “stay calm and you’ll be taken care of.”

Well-know wiseguy worrywart Georgie Boy is “antsy” and “perturbed”, according to those familiar with the situation and the entire current ruling body of the Philly Family (Mazzone, Ciancaglini, Boss, Joseph (Skinny Joey) Merlino and consigliere Joseph (Uncle Joe) Ligambi) “uncomfortable and annoyed.”

Borgesi, 50, grew up with Merlino, Mazzone and Ciancaglini’s fearless younger brother Michael (Mikey Chang) Ciancaglini and the four of them led a Family revolt in the early 1990s when they were in their late 20s, going to war with then Philly mob boss John Stanfa, a conflict they eventually won upon Stanfa’s imprisonmen. It was a violent, brazen multi-year street battle that cost Mikey Chang his life – he was gunned down in 1993 – but catapulted the other three into the east coast mob elite. By 1998, the trio was in charge of the Philadelphia mafia. Merlino was Don, Mazzone was underboss and Borgesi was consigliere.

However in 1999, their gangland mentor and sitting Philly Godfather Ralph Natale flipped after they had abandoned him financially when he was locked up a year prior on a parole violation and the FBI put the finishing touches on a well-stocked RICO indictment that was eventually filed in the summer of 2000, resulting in Merlino, Mazzone, Borgesi and Johnny Chang being convicted at trial. Although multiple murders from the Family civil war of the 1990s were charged in the indictment and Natale testified in court to what he knew about them, nobody in the case was convicted of any homicides and most got easy-to-digest sentences considering the circumstances.

Mazzone and Johnny Chang got out first in the mid-2000s – Ciancaglini in 2006, Handome Stevie in 2007. Skinny Joey, 52 and an American celebrity gangster like few others, if any, of the last two decades, was released from prison in 2012, the same year Borgesi was tagged with a federal loan sharking indictment out of Delaware County and forced to do two more years and endure two trials that both went out the window when the respective juries hung on the charges he faced as part of a shoddy racketeering case involving his uncle, Uncle Joe Ligambi, reputed to have been the acting boss of the Philadelphia mob in the 2000s and early 2010 while Merlino was away. The star witness in the cases was Borgesi’s alleged proxy on the outside, Louis (Bent Finger Lou) Monacello, a brash and smug wannabe wiseguy whose testimony didn’t sway jurors against Borgesi and Ligambi (although a few of their co-defendants were convicted or pled out).

Monacello claimed on the stand that Borgesi had bragged to him about participating in 11 murders on behalf of the mob. Natale’s testimony at the heavily-publicized  2001 Philly mob trial painted Borgesi as a coordinator of several execution plots hatched by Natale himself and the wisecracking, charismatic, yet infamously treacherous Merlino.

Mazzone, who allegedly runs the day-to-day affairs of the Philly mob with Merlino  laying low in Florida, ruling from afar, and Ciancaglini as his No. 2, is unhappy with Borgesi for his push to get his stripes back so soon.

“Stevie thinks Georgie Boy is a wild card now, thinks he has too much to prove and that worries him and everybody else,” said a source that knows both parties. “He feels that Georgie is putting him in a tough spot, making him have to choose sides between him and Johnny Chang. If Georgie would just sit tight, he’d get put back into the mix eventually, but there’s too much heat right now and that’s exactly what Stevie and Johnny Chang, not to mention Joey, are trying to avoid. Not a lot of people like Georgie these days or his approach to this whole matter.”

Parole restrictions on Borgesi prohibit him from meeting face-to-face with any of his old pals/convicted felons from the neighborhood. More than two street sources tell the Mob Insider that Georgie Boy has his longtime close friends, the imposing Salvo brothers (former roofing union strong-arms, Dave and Mike), acting as his current emissaries.

If you believe the government, those same parole restrictions weren’t adhered to by Skinny Joey. He was brought to court in Philadelphia last week to answer charges by his parole officer and the FBI that he met with Ciancaglini in June at a Boca Raton cigar bar, allegations that if prove true will land Merlino back in jail.

Borgesi and Ligmabi, 75, are reportedly not getting along either and haven’t been dating back to Georgia Boy’s time in prison. On one occasion, Borgesi refused a visit from his uncle, after Ligambi had traveled all the way from Pennsylvania to a North Carolina correctional facility to see him.

David Salvo acted as a driver and bodyguard for Ligambi early in his reign on the throne as acting boss.