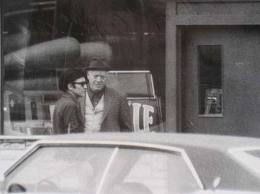 The famous Kanas City mob tandem of Anthony (Tiger) Cardarella and Felix (Little Phil) Ferina, a pair of longtime Missouri racketeers and a reputed two-man execution team for K.C. mafia boss Nick Civella, were both killed in the same seven-month span in 1984, victims of an early-tenure “housecleaning” by Civella’s successor William (Willie the Rat) Cammisano.

Recently released Kansas City Police Department files regarding Cammisano shed new light on the murders of Cardarella and Ferina and the nail-bombing death of independent gangster Carl Spero, homicides that kicked off the notoriously treacherous Willie the Rat’s decade-stint as don and celebrate their 30-year anniversary this year.

“That was a wild time, a lot of high-profile mob killings” one former K.C. FBI agent said of the 1984 hit parade. “Tiger and Phil Ferina were opposite personalities, but they got along and they were well-liked and that worried the hell out of Willie Cammisano.”

The gregarious Cardarella, who was a rock concert promoter and record-store chain owner in addition to being an enforcer for the Civella-run crime syndicate, disappeared on February 9, 1984 after leaving a dinner with his family. His strangled, decomposing body was found in the trunk of his Cadillac three weeks later. A little more than six months after that, Cardarella’s longtime partner in crime, the quiet, yet dangerous Little Phil Ferina was shot dead on September 19, 1984 outside his home.

Informants told the police and FBI, Cardarella and Ferina, upset with Cammisano’s ascension to the boss’ seat in the wake of Civella’s passing, were planning to take over the Kansas mob themselves and had reached out to area mafia figures in gaining support to kill Cammisano, their longtime captain, in the months prior to their own murders.

“Felix never got along with Willie the Rat, he got Tiger to call in some of his connections and they thought they could make a run at the crown,” said the retired crime buster.

Cammisano was a legend in the Missouri underworld and holds one of the most fearsome and lethal reputations in K.C. mafia history. He got his start under Kansas City Godfather and political-machine power Charlie Binaggio (1939-1950), acting as Binaggio’s driver and bodyguard in the early 1940s. When Binaggio and his underboss Charles (Mad Dog) Gargotta were slain in April 1950, shot dead in Binaggio’s First Ward Democratic Club, Cammisano’s name was bandied about by police informants as a likely suspect.

Widely respected around the nation in mob circles for his iron-fisted leadership, Nick Civella took over as boss of the Kansas City mafia in 1953 and held the post for the next three decades. Cammisano eventually became his No. 1 capo and enforcer, allowed to act practically autonomously in running his day-to-day operations, according to his police file.

Boasting an arrest record with a staggering 106 collars dating back to the 1930s, Willie the Rat was a noted strong-arm and assassin, earning his nickname for being known to kill his enemies and then “stick their dead bodies in the sewers with the rats,” per federal trial testimony.

In the late 1970s, Cammisano captained a shooting war within the K.C. underworld for control over the city’s popular River Quay (pronounced River Key) entertainment district on behalf of the Civella clan. He was a prime suspect in a number of gangland murders and bombings related to the dispute. The suddenly happening nightlife and increased stream of commerce in the formerly rundown waterfront neighborhood was cutting into the profits of the area’s City Market district, a similar-themed neighborhood long controlled by Civella and his cronies located close by.

According to law enforcement documents, Tiger Cardarella and Little Phil Ferina, acted as two of Cammisano’s top lieutenants in the bloody conflict and were named as suspects in several of the gangland slayings Willie the Rat is believed to have ordered.

The well-known pair gained local infamy as up-and-coming button men for the Civella Family, arrested and convicted in the June 1960 shooting of local wiseguy and drug dealer Kenny Sheetz, who was ambushed in front of his home three days removed from testifying in front of a federal grand jury looking into the affairs of the Kansas City mob’s Omaha, Nebraska capo, Tony Biase. Despite taking seven bullets, Sheetz miraculously survived the shooting.

“This is for Tony,” Cardarella allegedly said while he and Ferina were pumping Sheetz full of bullets.

After Cardarella, Ferina and Biase served prison time for the Sheetz shooting, Cardarella would go on to be convicted of running a stolen music-record ring out of his set of retail stores called “Tiger’s Records.” Informants told Kansas City vice detectives that Cardarella had his nickname dating back to his days as a boy scout and he was one of the largest fences of “hot” merchandise in the Midwest.

Cardarella’s and Ferina’s names came up in the investigation into the murder of Missouri Teamsters union power Nick Spero in 1973, leading to much of the River Quay strife when his younger brother Carl was released from a prison sentence two years later. Carl Spero aligned with K.C. mob soldier David Bonadonna and his son Freddie, the main business developer behind the River Quay resurgence and the neighborhood’s bar and restaurant association president, to challenge Cammisano’s attempt to infiltrate the area and try to gain retribution for his brother’s murder in the process.

The hit man team of Cardarella and Ferina had their names surface again in the investigation into the July 22, 1976 execution of David Bonadonna. The veteran gangster was found in the trunk of his car with five bullet wounds to the head. Less than a year later, Cardarella was jailed on his receiving stolen property conviction.

Most experts point to the Virginian Tavern shootings as the event that ended the River Quay war. On May 17, 1978, masked gunmen burst into the watering hole and Spero headquarters, unloading their weapons into Carl and his two baby brothers and top henchmen Mike and Joe Spero. Mike was killed, Joe was wounded and Carl was paralyzed, shot in the back as he ran for cover out a side alleyway exit.

By 1979, the shooting and bombing war had literally decimated the once-thriving, trendy downtown party mecca into rubble and ruins. The River Quay was no more. The assault on the Speros on the other hand was far from over.

Joe Spero died in a 1980 bombing. He had identified K.C. mob capo-future underboss Carl and (Tuffy) DeLuna and soldiers Charlie Moretina and Joe Ragusa as the Virginian Tavern shooters to investigators.

A wire installed by the FBI in a restaurant frequented by Kansas City Mafiosi searching for information on the River Quay slayings and future plans to finish off Carl Spero, resulted in the breaking of the Las Vegas hotel and casino skim case, (which became the landmark Operation Strawman and Operation Strawman II indictments). The wire  didn’t land any murder talk, however did catch Civella and his men discussing the specifics of the Midwest mafia’s stranglehold over the Nevada gaming paradise, tipping the government off to the millions of dollars being stolen off the top of gambling profits in the desert, siphoned directly out of casino count rooms and into the pockets of mobsters thousands of miles away.

Willie Cammisano was convicted of extortion related to his shakedown of River Quay establishments and served five years in prison. The star witness against him was Freddie Bonadonna (entered Witness Protection Program, committed suicide years later).

Following Nick Civella’s death of cancer in March 1983, Willie Cammisano, released from prison that summer, assumed the reigns as Don of the Kansas City mafia. Almost immediately, according to police files, Willie the Rat turned his attention to eliminating any and all potential rivals. His emissary of death – his son, local mobster and reputed assassin William (Little Willie) Cammisano, Jr.

Less than half a year after he got home from jail, Willie the Rat struck. Wheelchair-bound Carl Spero was blown up by a bomb placed in his office at the Five-Star Investment Used Car Lot on January 6, 1984, his lifeless body hurled 20 feet onto a nearby sidewalk.

Like Willie the Rat, Tiger Cardarella came out of jail in 1983 ready to take on the world. Little Phil Ferina, according to police documents, had been planning a hostile seizure of the K.C. crime syndicate since 1982 and when his buddy Cardarella returned to town he joined the ill-fated power play.

Informed by his son of the rumored plot – the scuttlebutt circulating when he was imprisoned – , Willie the Rat first used Cardarella’s heavy gambling debts as an excuse with his many loyalists as why he had to be done away with.

The popular 58-year old wiseguy was found hogtied in a freight company’s warehouse parking lot on February 27, sending Ferina out on a revenge rampage, openly cursing and threatening the elder Cammisano, per KCPD informants.

Ferina, 59, was caught by two gunmen getting out of his car in front of his suburban residence on September 19 and killed at the scene.

“We knew who it (the three hits) came from, everyone did – but nobody would talk on the record and there wasn’t enough else to make a case,” the former Fed recalled.

Willie the Rat died of lung cancer in 1995, the reins of the crime family passing to Nick Civella’s nephew Anthony (Tony Ripe) Civella – died in 2006.

“That was one bad man, he was a hoodlum’s hoodlum, as they say on the street,”  said the retired FBI agent of Willie the Rat. “His kid’s the same way, he always wanted to follow in his dad’s footsteps and be a feared killer. That’s what he became. The Cammisano name in Kansas City means murder.”

According to FBI and court records, Little Willie Cammisano, Jr., a current alleged capo in the Kansas City mafia, is suspected to have planted the bomb that killed Carl Spero, strangled Cardarelle to death and along with fellow mob soldier Vince Copica, gunned down Ferina.

Cammisano Jr and his brother, Jerry, were both convicted of running a sports book in 2009. Little Willie’s only other conviction is an obstruction justice charge from 1989 for trying to intimidate a witness called in front of  a federal grand jury looking into the gangland murder of Missouri businessman Roger Reid (a 1988 slaying Little Willie is the prime suspect in).

Jerry Cammisano’s son, Vito, was in the news last spring when his boyfriend, University of Missouri football star Michael Sam, became the first openly gay player to be selected in the NFL Draft (chosen, but soon cut by the St. Louis Rams).