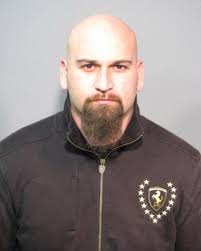 As the extreme violence in the mafia in Canada appears to be tapering off, former Godfather of Montreal Vito Rizzuto’s one-time bodyguard and final line of defense at the peak of a brutal modern-day street war being fought for gangland supremacy in the Canadian underworld, Desiderio (Big Desi) Pompa, was sent to prison earlier this month.

Pompa, a hulking 37-year old Mafioso and heavily trusted Rizzuto soldier, got hit with a three-year sentence for illegal firearm possession, stemming from an incident four years ago during the height of the gangland conflict that dispensed at least a dozen bodies in less than a half-decade.

Acting on an informant’s tip,  on December 20, 2010 Canadian police raided the residence of Pompa’s girlfriend and found Pompa and three guns, including a .357 revolver on his person. Prior to his recent conviction, Pompa didn’t have a criminal record.

Rizzuto and his father, Nicolo (Uncle Nick) Rizzuto grabbed control of the Montreal mafia in the late 1970s. When Vito Rizzuto was convicted for his role in the 1981 Bonanno Family “Three Capos Murders” in 2007 – pleading guilty in exchange for a 10-year bit – and housed away in an American correctional facility, his criminal empire quickly came under siege. Several of Rizzuto’s men turned against him while he was incarcerated and teamed with deported New York Bonanno boss Salvatore (Sal the Ironworker) Montagna, to try and forcibly remove him and his family from power.

Between 2009 and 2010, Rizzuto’s father, son Nick, son-in-law and consigliere Paulo Renda and acting boss Agostino Cuntrera were all killed by the renegade faction, which soon splits itself and results in the assassination of Montagna. Rizzuto’s former protégé and aide-de-camp Raynald Desjardins, who had previously joined with Montagna to challenge the Rizzutos leadership, is currently awaiting trial on charges that he orchestrated his execution.

Emerging from his U.S. prison cell and returning to Montreal in October 2012, Vito Rizzuto lashed out at his enemies – most of them one-time allies – and before his own death via cancer a little more than a year later, is alleged to have ordered six of their murders.

According to Canadian court documents, Pompa was Vito Rizzuto’s personal protector and chauffer during his final year on the street and had acted in a similar capacity with Uncle Nick Rizzuto, in the months leading up to his 2010 sniper slaying inside his mansion. Pompa’s name surfaced in the investigation into the murder of fellow Rizzuto family bodyguard Ennio Bruni, which took place weeks before the Rizzuto patriarchs.

Informants told Canadian law enforcement that Pompa was given the 36-year old Bruni’s gambling and loan sharking businesses following Bruni’s murder on September 29, 2010, as he walked to his car at 3:00 a.m. after a night at the Café Bellarose, a small bar and social club located in a suburban Laval shopping mall. Bruni was a protégé of Rizzuto syndicate capo and then-acting boss Francesco Arcadi and had survived a murder attempt the year prior, sustaining four bullet wounds to the chest, back and shoulder.

His voice was picked up on bugs placed in the Café Consenza, the Rizzuto nerve center for decades.

He had been seen by Canadian authorities shuffling Uncle Nick Rizzuto around town the summer before he died.